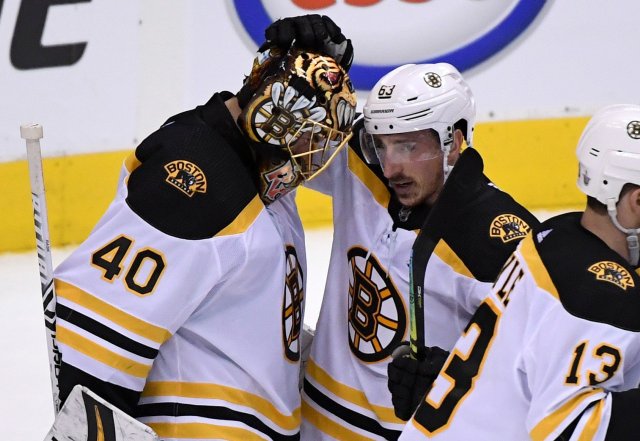 Tuukka Rask and the Bruins are on a mission. They’re the favorites to win the Stanley Cup versus the storybook Blues. AP Photo via Getty Images.

In less than two hours, the puck will drop on another Stanley Cup. On Memorial Day when we honor and remember veterans who made the ultimate sacrifice for our country, the Blues and Bruins get going tonight in Game One up in Boston.

Yes, it’s once again another Boston team chasing a championship. Haven’t they won enough recently? The Red Sox dominated 2018 by winning a fourth World Series in 14 years. The Patriots just won another Super Bowl in February led by the game’s greatest quarterback, Tom Brady. I know I’ll catch flak for that. Go right ahead. Who’s better?

Now, here are the Boston Bruins aiming to add a second Cup after winning it eight years ago. They could be going for number three this decade if not for a wild finish to an epic Game Six won by the Blackhawks in 2013. Let’s just say the name Dave Bolland is one that probably is cursed in Quincy Market. If [insert Yankees] sucks along with anything New York in this town, just imagine the intense disdain they have for Bolland and Aaron Bleeping Boone, who replaced Bucky Bleeping Dent following his game-winning walk off home run in Game Seven of the 2003 ALCS.

As dominant as the Bruins have been in sweeping the Hurricanes (that happened some time this month), the Blues are here due to their grit and tenacity. After getting one of the worst missed calls in an exasperating Game Three overtime loss to the Sharks, they responded like champions by winning the next three games to take the Western Conference Final in six.

Leading goalscorer Jaden Schwartz and dangerous finisher Vladimir Tarasenko have had help thanks to a strong supporting cast. Hometown hero Pat Maroon was responsible for sending them to the Conference Finals with his goal in sudden death that beat the Stars. He’s been one of a few Blues that have supplied scoring depth.

Tyler Bozak, Oskar Sundqvist and promising rookie Robert Thomas have all provided offense at key moments. Veteran Alex Steen now plays a fourth line supporting role along with Ivan Barbashev and Sammy Blais. Even Robert Bortuzzo scored a huge goal for a game-winner against San Jose during the run.

Rookie Jordan Binnington has held it together in net for Coach Of The Year candidate Craig Berube, who never ever panics. That much was evident following the bad break when the four officials somehow didn’t see a hand pass by Timo Meier that allowed Erik Karlsson to score the OT winner in Game Three last round. It typifies how poor the officiating has been this postseason.

St. Louis moved on and won Game Four by hanging on despite a couple of icings from captain Alex Pietrangelo. After that victory, they dominated the final two games against a wounded Sharks, who were without Karlsson and Tomas Hertl in Game Six. Neither lasted a one-sided Game Five.

The Blues do it by pounding the opposition with a relentless forecheck. They’re very physical. The fourth line set the tone in the series turning Game Four when Barbashev scored in the first minute on a forced Brent Burns turnover.

They also boast one of the game’s best two-way centers in Ryan O’Reilly. His 14 points include 11 assists, which is tied with Pietrangelo for first on the team. He takes most of the key face-offs, and is a key penalty killer. David Perron lends support behind the trio of Schwartz, O’Reilly and Tarasenko.

The St. Louis blueline is led by Pietrangelo and Colton Parayko. Both are right defensemen who are good at keeping pucks in. They each boast big shots. They get the bulk of the minutes followed by vet Jay Bouwmeester, who is playing in his first Stanley Cup. Joel Edmundson, Bortuzzo and Carl Gunnarson receive secondary minutes based on match-ups. Having Vince Dunn available would really boost their chances. He’s a superb left skating defenseman with offensive capability. A very good transition player.

How do these Blues compare with the Bruins? Boston boasts one of the best scoring lines in hockey. The cohesive trio of Brad Marchand, Patrice Bergeron and David Pastrnak (Pasta) are a nightmare for opponents due to their lethal combination of skill, grit and speed. They can beat you in transition due to being defensively responsible, or they can hurt you on the forecheck.

Particularly Marchand, who’s everyone’s favorite super pest. The Rat leads Boston in scoring with 18 points (7-11-18). After posting his first ever 100-point season, which was ignored by biased writers due to his antics, Marchand is proving he’s a top 10 player who should be up for the Hart. They may not like him. But he is relentless. The game’s best shorthanded player (26 shorthanded goals since ’10-11) is out to prove something. On Media Day, he admitted that the pain of losing in ’13 still lingers.

The Bruins have more scoring balance than the Blues. Entering this round, six different Boston players have at least 12 points. Following Marchand is emerging star Pastrnak. He has seven goals and right assists in his first deep playoff run. Just 22, he’s already established himself as one of the premier forwards in the league. Combining his skill with Marchand’s tenacity gives Boston a lethal 1-2 punch on the power play. Watch out for the playmaking of Marchand. He can set up either Pastrnak or Bergeron (8 goals) for power play goals. That’s if he’s not doing the finishing himself.

Bergeron has been one of the best players in hockey for over a decade. Stolen by Boston with the 45th pick in the famed ’03 Draft, he is a true three zone player. A multiple Selke winner who can do damage five-on-five, power play or shorthanded, he’s as good as it gets in clutch situations. Just ask Maple Leaf fans. Mention 2013.

It’s up to O’Reilly to stifle the Bergeron line. He’s younger and certainly capable. If his line can limit their attack while playing in the Boston zone, then the Blues have a chance. But they better get something from Brayden Schenn. He’s been almost invisible so far. He’s too good a player to not do anything.

The dilemma for St. Louis is the Bruins also have one of the best playoff performers in underrated pivot David Krejci. Like Bergeron, he can take and win big draws. He’s also very tough on the cycle. So far, he’s been healthy. Unlike past years, Krejci is playing excellent hockey. After only missing a game in a 73-point season, the veteran pivot has 14 points during this run. He and speedster Jake Debrusk have good chemistry. Even though he only has three goals in the postseason, don’t let that fool you. He’s one of the fastest skaters, who can get breakaways due to his explosiveness. Keep an eye on Debrusk this series.

Boston seems to have pushed the right buttons. Both Charlie Coyle and Marcus Johansson have been great pick ups. Coyle was their best center in the seven-game triumph over Toronto. He also killed Columbus with a game-tying and game-winning goal in a comeback victory.

Coach Bruce Cassidy seems to push all the right buttons. When his team needed a physical lift, he reinserted veteran David Backes. Ironically the former Blues captain, that’s a huge subplot. How will he perform against his former team? They let him go where he signed a big contract with Boston. He’s not the same player due to the physical style he plays. I think he’ll be highly motivated.

It would be a oversight if I don’t mention the impact of Sean Kuraly. Ever since the fourth line pivot returned to finish off the Leafs, he’s made a difference. He isn’t a sexy name in this series. But the relentless checking he brings along with his speed and defensive acumen on the penalty kill are important to Boston. Kuraly gives the Bruins a decided edge at the center position with Coyle. I’m not sure the Blues can match them. It’ll depend on Schenn and Bozak.

For all the hoopla surrounding Zdeno Chara and Charlie McAvoy on the Boston back end, it’s the supporting cast that’s stepped up. Torey Krug is the offensive defenseman who can step up. But Matt Grzelcyk and Connor Clifton are overlooked. Brandon Carlo gets heavy minutes without any fanfare. He’s a physical presence who defends well. It was his big defensive play that forced Artemi Panarin into a gigantic turnover that resulted in a crushing Pastrnak goal that Columbus never recovered from.

There are some questions surrounding Chara’s health. He missed Game Four last round. But has had plenty of time to recover. McAvoy is the key to that top pair. As experienced as Chara is, McAvoy covers up a lot of the future Hall of Famer’s mistakes. Chara is arguably the best leader in hockey. He’ll make the subtle plays. The Blues want to apply pressure on him.

If there’s a big contrast, it’s in goal. While Binnington has come out of nowhere to get the Blues to their first Stanley Cup Final since 1970 when they were swept by the Bobby Orr, Phil Esposito Bruins, Tuukka Rask is as good as it gets. He’s having the best postseason by a goalie since former teammate Tim Thomas backstopped the Bruins to its first Cup since ’72. Thomas won the Conn Smythe. He wouldn’t allow them to lose to the Canucks despite trailing 2-0 and 3-2 in a memorable seven-game series.

Rask was unbelievable in the last two rounds. After stoning the Blue Jackets by winning three straight, he was a brick wall in Boston’s sweep of the Hurricanes. They only scored five times on him. In his last seven games (all wins), Rask has allowed nine goals. He’s never played better. How will the long layoff affect him?

If he remains as calm and as locked in as he’s been, the Blues have no chance. Rask enters the Stanley Cup with a 1.84 GAA and .942 save percentage with two shutouts. It’s easy to forget that he’s a former Vezina winner who’s taken some ridiculous criticism from unappreciative Boston fans. Shocking. He looks like he’s on a mission. A Stanley Cup and Conn Smythe would vault him into some serious conversation.

The pick is the Bruins. They have the home ice which could be huge if it goes seven. I am not big on home ice. But in a Stanley Cup high pressure situation, that matters. It helped the Devils win in ’03. Of course, the ’09 Penguins and ’11 Bruins are proof that the road team can win Game Seven.

If you’re asking me who has better fans, it’s the Blues. Those fans have waited a long time for this moment. Forty nine years for this rematch. When St. Louis came in during Expansion, they reached the Stanley Cup Final in their first three years. They’ve never won a Stanley Cup game. One win and they make franchise history. But they’re here for a different reason with something bigger in mind.

I’ll be rooting for the Blues. They’re likable and I’m sick and tired of Boston winning everything. With the exception of a few I know, most of their fans are annoying. Maybe it’s the stench of the Red Sox and Patriots.

Asked how many games, I actually took Boston in 5. I was told I’m disrespecting St. Louis. Maybe. I think the Bruins match up better at every position. Binnington will need to stand on his head and outplay Rask. I’m not saying it isn’t possible. I just wonder if Tarasenko will disappear against the tenacious checking of the Bruins. Is Schwartz going to continue to score?

The Bruins have more scoring threats. That concerns me. Here’s hoping I’m wrong and we get a classic series. Let’s Go Blues!