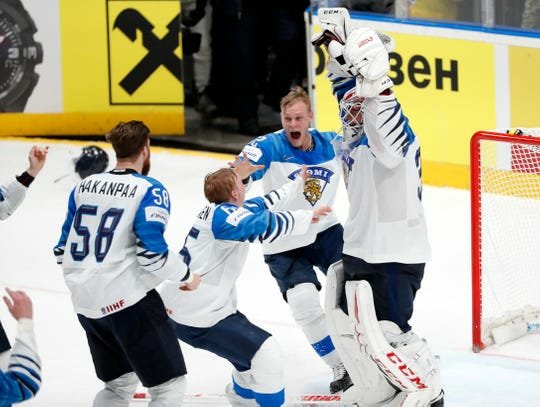 As it turned out, nobody had better team chemistry than Finland. It didn’t matter that they lacked proven NHL stars. Suomi more than made up for it with good overall play and stellar goaltending from hero Kevin Lankinen.

That was enough to take gold at the 2019 World Championships in Bratislava. After shutting out the powerful Russians in the semifinals, Lankinen allowed one goal to runner up Canada in a 3-1 victory on Sunday. He was tremendous for Finland throughout the tournament, finishing with a World Championship best 1.50 GAA (goals-against-average) and .942 save percentage.

Facing the two winners of each Group in the single elimination round, Lankinen stopped 75 of 76 total shots to backstop Finland to the gold medal at the Worlds. That included a 32 save shutout in a 1-0 upset of Russia. Marko Anttila scored the only goal with 9:42 left in regulation. The 24-year old Lankinen made it stand up by thwarting the likes of Nikita Kucherov, Evgeni Malkin, Alex Ovechkin, Evgeni Kuznetsov, Evgeni Dadonov, Kirill Kaprizov and Nikita Gusev.

After beating one of the best teams Russia had ever sent, for an encore, he held Canada to one goal on 44 shots yesterday. The only tally came from defenseman Shea Theodore at 10:02 of the first period on a breakaway. Canada led until Anttila tied it up with a power play goal at 22:35 of the second period. The Finland captain also got the tournament winner in the third. Harri Pesonen added the insurance marker with 4:06 left.

Finland was led by 18-year old forward Kaapo Kakko. The big right wing scored six goals and added a helper in the preliminary stage. Even though the teenager didn’t register a point in the knockout stage, he certainly established himself. Kakko’s combination of size, speed, skill and strength were on display in the tournament. Whether he goes first or second in next June’s NHL Draft, Kakko is ready.

Canada had a good roster that took silver. It wasn’t on par with Russia, who settled for the bronze by posting a 3-2 shootout win over the Czech Republic. The Canadians were led by Tournament MVP Mark Stone. He paced all skaters in goals (8) including the clutch overtime winner to stun Switzerland in the quarters. That came following Damon Severson’s miraculous tying goal with 0.4 seconds left.

Stone was great on the big stage adding a goal and assist in Canada’s 5-1 semifinal win over the Czech Republic. He tied with teammate Anthony Mantha for fifth in scoring with 14 points (8-6-14). Along with tournament leader William Nylander (5-13-18), Mantha was a breakout star finishing with seven goals and seven assists.

For Russia, both Kucherov (6-10-16) and Gusev (4-12-16) tied for the team lead in scoring. Gusev will likely play for the Golden Knights this Fall. If he does, adding him to a nucleus that includes Stone, Jonathan Marchessault, Max Pacioretty, Paul Stastny and key RFA William Karlsson will make them even more formidable.

Team USA was led by Patrick Kane. His dozen points (2-10-12) paced a roster that never showed enough consistency to contend for a medal. Kane’s Blackhawks teammate Alex DeBrincat potted seven goals while adding two assists. The 40-goal man will be heard from for years on an aging Chicago roster that’ll need more youth to stay competitive.

As brilliant as Kane and Jonathan Toews are, they’re getting older. Duncan Keith and Brent Seabrook are near the end and Corey Crawford has battled concussions the past two years. He turns 35 on New Year’s Eve.

Is it possible that one day Lankinen supplants Crawford as the Blackhawks starter? They signed the Finn last year. A proven performer for HIFK Helsinki of the SM-liiga, winning gold for his country could give him the confidence boost as he enters his second pro season in North America. In 19 games for Rockford of the AHL, he went 7-12-1 with a 2.50 GAA and .910 save percentage.

Collin Delia and Anton Forsberg have NHL experience. But neither is overwhelming. Former Stanley Cup champion Cam Ward was the Chicago backup in 18-19. He’s unrestricted this summer.

Maybe we see Lankinen in the future for the Hawks. Who knows? It’s happened before. You never know when a unknown player who stars on the international stage will get enough recognition to finally make it to the NHL. Mats Zuccarello, anyone? Artemi Panarin? Time will tell.