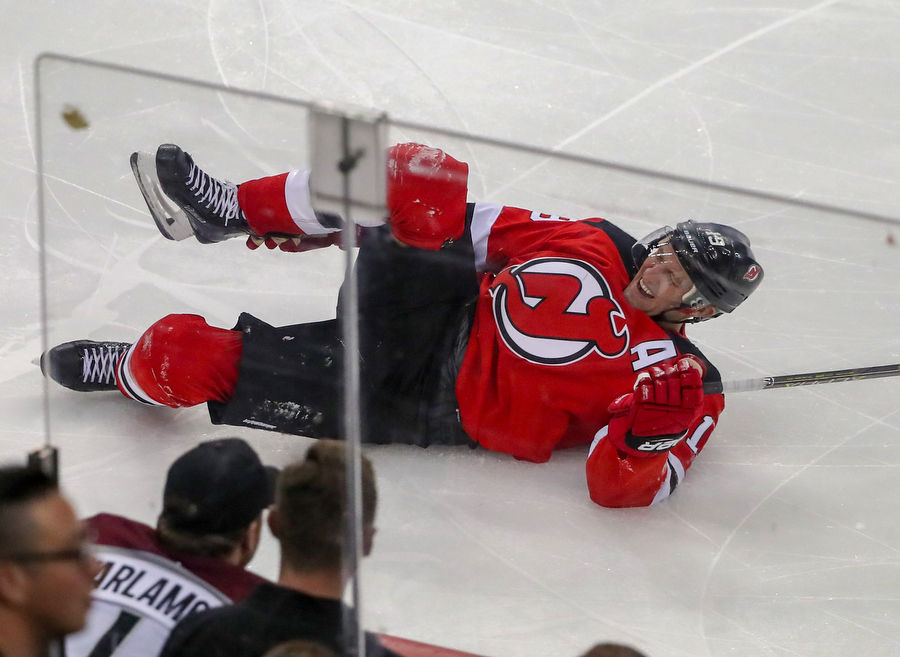 There’s a certain bit of irony that in 2018-19 the Avs hung the first loss on the Devils for the season after last year’s great start was kicked into high gear against the Avs in the 2017-18 home opener.  Turns out this was a good game to basically completely miss watching – or maybe me missing the game entirely was part of the good juju dissapearing for tonight.  Or perhaps it was coach John Hynes changing a winning lineup by scratching John Quenneville for Drew Stafford, not that I really have an issue with it since Quenneville’s done nothing in the early going.  Maybe I’ll catch the condensed game version later, NHL.com is at least good with that in the highlight package.  Hynes certainly didn’t sound happy about the lack of effort and I’m glad the standard’s higher around here now, but by the same token I suppose a dud was inevitable eventually.

Also it was ironic that just a game after there was such injury concern for Will Butcher that thankfully proved to be unfounded, now the Devils have another OMGZ potential injury with Travis Zajac limping off with a lower-body injury in the second period.  My buddy at the game told me it looked like his ACL, and I winced.  Of course playing amateur doctor from a distance can be problematic as the internet worrywarts proved again with Butcher speculating on a collarbone or serious shoulder injury, but it turned out to only be a sore shoulder.  And to be fair that same buddy also was overly fatalistic with Sami Vatanen early in the game when the Devils’ defenseman went down the tunnel to get looked at, but he returned quickly.  Maybe we won’t be so lucky with Zajac though, it would be a shame since he’d been raking in the early going, much more so than last year.

Even not watching, just looking at the boxscore can tell you a lot in itself.  And one of the things that jumped out at me was the scary low icetimes for ‘second-liner’ Marcus Johansson and the revolving door of wings playing with him and the still ineffective Pavel Zacha throughout the contest.  Zacha’s own icetime would also have been pretty low if it wasn’t for his nearly six minutes shorthanded, although to be fair his abnormal fight with Nikita Zadorov might have had something to do with it.  Although Johansson and Zacha seemed like they had the potential to be a good combination early, eventually you have to start producing and not just look good while failing to score.  I call it Beau Bennett syndrome, he and players like him I refer to as Corsi darlings, guys whose advanced stats look great but never lead to actual production.  Johansson and Zacha are eventually going to need to step up their production, both for the team and for their own careers.  Johansson is coming up on free agency, having a second straight dissapointing season wouldn’t exactly be what he or his agent would want.  While Zacha eventually needs to start living up to the billing of being a #6 overall pick and the first draft pick of the Ray Shero era before the ‘b’ word gets thrown around more vociferously.

At least both Nico Hischier and Taylor Hall got off the schnied tonight as each got a goal, too bad it was in defeat.  Even in a sloppy game the Devils still led 3-2 in the third period after Brian Boyle’s power play goal, but Gabriel Landeskog’s last two goals of a hat trick turned a two-point game into a zero-point one.  Well like one-time team announcer Doc Emrick used to say (citing Ken Hitchcock I believe), the other team’s getting paid too.  Sometimes you’ll just be outplayed, though there’s never really a good time to have a clunker I guess you could do worse than have one against a Western Conference playoff team.

Also in the boxscore, Kyle Palmieri’s sixteen minutes of icetime look a little low considering his lights-out production so far.  Surprisingly coach Hynes managed to balance out the icetime despite losing Zajac in the second period and no forward played twenty minutes.  Only Andy Greene played more than twenty minutes on defense, but finished with an assist and even plus-minus for the night.  Mirco Mueller wasn’t so lucky, finishing with a -3 while going up against the Landeskog line it would seem.  Maybe goalie Keith Kinkaid finally wasn’t at his best either after a hot start to the season.  He’s certainly entitled to an off night, but with Cory Schneider now listed as day-to-day Keith can’t afford too many more clunkers if he wants to maintain a grip on the starting job.

There won’t be much time to wallow in the first loss of the season or whatever the diagnosis is for Zajac, as the Devils have their first road tilt on Saturday afternoon against the rival Flyers, which is never an easy game in spite of their seemingly neverending goaltender carousel.  Playing Western Conference teams – especially early in the season – doesn’t carry nearly as much pressure as playing against a rival team who you may well be fighting for a playoff spot with.  Of the team’s first five games only the romp over the Caps was against an Eastern Conference foe.