The points are coming for Hughes 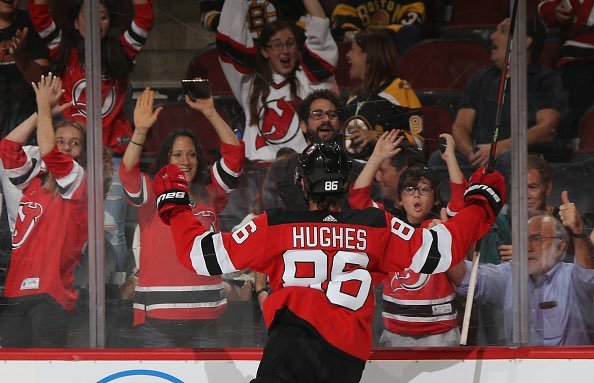 It took a while, but Jack Hughes has come around. The Devils number one overall pick struggled out of the gate by going without a point the first six games of his NHL career.

There were some close calls. The 18-year old center had a few near misses on potential goals. He had bad luck by hitting goalposts. It is an adjustment going from dominating juniors to making the quantum leap into the NHL.

For Hughes, he even saw some time on the third line. That was more by design from coach John Hynes. The much maligned Devils coach has been justifiably criticized for much, but his handling of Hughes isn’t one of them. An injury to Nico Hischier helped Hughes move up to center the top line. That worked out well.

Jack Hughes, who was called a bust 6 games into his career has 7 points in his last 6 games with tonight’s goal

Since moving between Taylor Hall and Kyle Palmieri, the rookie has fit in well. Given the kid’s skill, speed and capability, Hughes probably won’t be moving off that line for a while. Even with mixed results from the team, he’s producing. After no goals or assists in the first six, Hughes has recorded seven points (3-4-7) over the last half dozen. He’s failed to record a point in just one game. The unpredictable 7-6 overtime loss to the Lightning on All Hallows Eve.

His best game so far was a three-point effort (1-2-3) in a 5-3 home defeat to the improved Coyotes. A superb game even though it proved to not be enough due to the frustrating Devils’ inability to protect leads.

Let us, for a moment, also admire that pass in the slot by #NJDevils Jack Hughes. https://t.co/4yaCLjMRu9

Had they done so recently, their record would not be 3-5-4. Especially coming off their best win thus far by defeating Carolina 5-3 in Raleigh. Even if it came at the expense of Hurricanes backup James Reimer, it was a good win.

New Jersey will be tested some more on the challenging five-game road swing with stops at Winnipeg on Election Day, followed by the Western Canadian tour in Calgary, Edmonton and Vancouver.

For Hughes, all three of his goals have come on the power play. That’s not surprising. He has four power play points (1-3-4). Even strength is always hard for young players. Steven Stamkos experienced similar growing pains with Tampa. Playing center is also a big responsibility. Hughes has three even strength assists out of his seven points and is a minus-six.

However, he’s improving. If you looked at his overall face-off numbers, it is misleading. He’s won 52 and lost 74 for only 41.3 percent over a dozen games. But he was over .500 in two of the past four contests, going 27 and 28 over that stretch. A good sign.

Regarding the Calder race, Hughes will see a familiar name among the rookie point leaders. Older brother Quinn has 10 points (1-9-10) for the Canucks. He is a defenseman that’s one year older than Jack. Right now, he’s out due to a lower body injury. He’s likely to miss a third consecutive game tomorrow.

The interesting thing about this season’s rookie class is you have a few teenagers looking to make an impact. As we’ve seen on the Manhattan side of the Hudson Rivalry, it’s taken Kaapo Kakko even more time. The Rangers’ second pick enters tonight’s match against Ottawa with only three points (2-1-3) and an ugly minus-12 rating over 11 games.

Like Hughes, Kakko has seen time on a secondary line by design. Right now, it’s for the best. He’ll likely remain on the third line until the 18-year old Finnish right wing proves he can be trusted. Even if you disagree with the coaches, their jobs are to win games. They have to find the right matchups.

Third overall pick Kirby Dach has three points (1-2-3) for the Blackhawks. It’s in a secondary role where he can learn from future Hall of Fame tandem Jonathan Toews and Patrick Kane. Chicago has one more game to decide if they’re keeping him for the remainder of the season. Never an easy thing. Winnipeg designated defenseman Ville Heinola to the AHL after eight games. He showed promise going 1-4-5 and plus-three.

As the season moves along, we’ll continue to follow the progress and developmental process of the top picks. For now, at least Devils fans can get a little excited over their number one pick. Hughes belongs.

Derek Felix is sports blogger whose previous experience included separate stints at ESPN as a stat researcher for NHL and WNBA telecasts. The Staten Island native also interned for or hockey historian Stan Fischler and worked behind the scenes for MSG as a production assistant on New Jersey Devil telecasts. An avid New York sports fan who enjoys covering events, writing, concerts, movies and the outdoors, Derek has covered consecutive Staten Island Yankees NY Penn League championships in '05 and '06. He also scored Berkeley Carroll high school basketball games from '06-14 and provided an outlet for the Park Slope school's student athletes. Hitting Back gives them the publicity they deserve. In his free time, he also attends Ranger games and is a loyal St. John's alum with a sports management degree. The Battle Of Hudson administrator and chief editor can be followed below on Twitter and Facebook.
View all posts by Derek Felix →
This entry was posted in Column and tagged Calder Race, Devils, first overall pick, improvement, Jack Hughes, John Hynes, Kaapo Kakko, Kirby Dach, Kyle Palmieri, New Jersey, Quinn Hughes, Rangers, Taylor Hall, Ville Heinola. Bookmark the permalink.