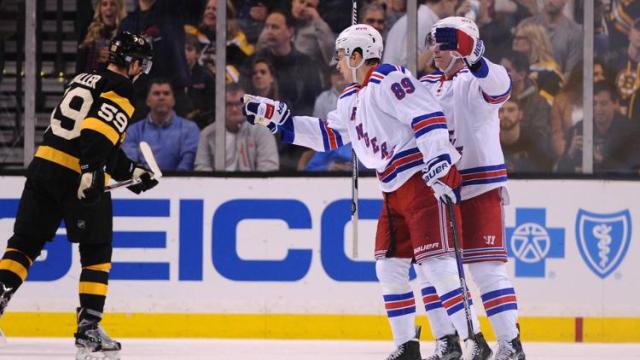 Buch Celebrates! Pavel Buchnevich enjoys his game-winning goal in a important 4-3 Rangers win over the Penguins. In a tight division where six teams are battling for position, one team could be left out in the cold due to the current NHL playoff format. AP Photo via Getty Images courtesy sny.tv

By show of hands, how many people like the current playoff format? You won’t find me as one who agrees with it.

The idea of reestablishing the old divisional playoffs for the first two rounds sounded good in theory. But it was always flawed. In guaranteeing the top three in each division automatic entry, it didn’t account for the awkward situation that this season could present. One look at the standings in the Eastern Conference is reason for concern.

In what’s now the best division in hockey, the Metro has six teams with over 30 points. First place New Jersey is separated by four total points from the sixth Rangers, who posted a 4-3 win in regulation Monday night at the Penguins. A game that wasn’t their best but they got the bounces with Pavel Buchnevich’s pass banking in off Kris Letang for the game-winner with 8:48 left in regulation. Ondrej Pavelec made it stand up with 41 saves including over half in a weird second period (22 of 23) that saw the Blueshirts get two of the three goals on Tristan Jarry despite being largely outplayed.

#NYR with a win in Pittsburgh! pic.twitter.com/g8WcXTIS49

That’s hockey. What isn’t is the actual chance that one team in the loaded Metro Division will likely get screwed by the current playoff format. You have the surprising Devils first with 36 points followed by the Blue Jackets at 35. The Islanders behind John Tavares and emerging Calder front runner Mathew Barzal are third with 34. The Capitals are right behind in fourth with 33. Then come the defending champion Pens with 33 followed by the Rangers at 32.

It’s impossible for one division to get six teams into the NHL Playoffs. Not with the final two spots granting wildcards. At best, a division can get five in. Each is guaranteed three due to the top three automatically qualifying. A look at the thinner Atlantic is reason for perplexment. The Lightning lead the East with 40 points. A 6-2 win at home over the Islanders yesterday in which they scored four unanswered after Barzal and Jordan Eberle tied it is proof of how lethal the Bolts are. It’s not only Steven Stamkos and Nikita Kucherov but Brayden Point, Tyler Johnson, Ondre Palat, Yanni Gourde, Vladislav Namestnikov, Alex Killorn, Chris Kunitz, Ryan Callahan, Victor Hedman, Mikhail Sergachev who can beat you. They’ll be very tough to beat next Spring.

After the Lightning come the Maple Leafs with 35 points. They don’t have much D but are lethal offensively led by Auston Matthews, William Nylander, Mitch Marner, Nazem Kadri and James van Riemsdyk. They count on clutch saves from Freddy Andersen. Toronto will get in. The Canadiens have rallied since Carey Price returned to move up to third with 29 points. Even with how putrid they were, all they had to do was reel off five straight to move up. Brendan Gallagher is on pace for a career year with a dozen goals. Even with a lower body injury sidelining disappointing Jonathan Drouin, Montreal is getting clutch performances from Paul Byron and Andrew Shaw. Alex Galchenyuk has scored recently and Max Pacioretty is still doing okay in the goal department. With Price back to his old dominant self, they should be in contention. Shea Weber scored a pair with the first goal giving him 500 career points.

The thing is Montreal is only 13-13-3 with 12 ROW (regulation overtime wins). They’re one up on a talented but weird Boston team with the struggling Red Wings somehow only two out at 27 points. Last year’s story Ottawa continues to puzzle with poor play. Their 24 points are tied with the Panthers. Ever since they acquired Matt Duchene, they have lost a lot of games. Maybe he’s a jinx. I would expect the Senators to figure it out. They’re only five out due to the division they play in. Only lowly Buffalo with 18 points following a rare win over Colorado doesn’t look like they have a chance. They’ve struggled mightily under new coach Phil Housley.

If you counted the Hurricanes who have 27 points and the Flyers with 25, they’re better than Florida or Ottawa at this point. However, they’ll be hard pressed to make the playoffs in the loaded Metro. What if the sixth place team finishes with more points and ROW than the third place Atlantic participant? A distinct possibility. If you’re the Rangers, that’s gotta be in the back of your mind. Only the top five can qualify due to points and ROW. If the Devils are for real and there’s no reason to not think otherwise given the offensive improvement due to rookies Nico Hischier, Jesper Bratt, Will Butcher and the bounce back from Taylor Hall with Cory Schneider picking up his 100th career win as a Devil in last night’s impressive 4-1 road win at Columbus, then the margin for error is very little.

The Islanders score a lot of goals due to the Tavares line with Anders Lee and Josh Bailey along with the brilliance of Barzal along with steal Eberle (for Ryan Strome folks), Brock Nelson, Andrew Ladd, etc. Even with their unique platoon goalie situation between Jaro Halak and Thomas Greiss with a mediocre defense led by Nick Leddy and Johnny Boychuk, there’s enough talent and scoring depth to make it. Whether it’s as a top three seed or wildcard remains to be seen. But they’re a very exciting roster.

You have to think the Pens and Caps will improve. TMT. Too much talent! That leaves Columbus, who boast arguably the top goalie in Sergei Bobrovsky. They don’t score like the other teams but the Artemi Panarin addition is beginning to help. The blueline is strong with Norris caliber sophomore Zach Werenski and Seth Jones anchoring a corps that includes rough and tumble Jack Johnson and David Savard. With improvement from young forwards Josh Anderson and Oliver Bjorkstrand added to a nucleus featuring Cam Atkinson, Brandon Dubinsky, Nick Foligno, Boone Jenner and Alex Wennberg, they should be tough all year long.

What it boils down to is a flawed playoff system. The poor 3-7-1 start by the Rangers may come back to bite them. At 15-10-2 with 14 ROW and 32 points in 27 contests, they’ve recovered well. Even with flu ridden Henrik Lundqvist a scratch and Pavelec making a rare start, it worked out for the best.

Nothing surprises me with this team. If you’ve followed them intently through the years, they win when you least expect it while losing games they should win. They know by now how important the remaining 55 games will be. It’ll be the toughest challenge yet just to make the postseason.

If they don’t get in, don’t blame the messy playoff format. That’s been there and was before they made the switch in the 90’s under commissioner Gary Bettman. The divisional format emphasizes play in your division. The win over the Pens was the Rangers’ first of what need to be many against quality competition. With a visit to Washington coming up on birthday Friday and a quick turnaround in Newark Saturday, this is a early litmus test to see where they are before Christmas, They passed the first part.

As far as whether a Metro team finishes sixth with more total points or an identical amount and higher ROW than a third place Atlantic team who qualifies automatically, only time will tell. For now, it’ll be a huge battle till next Spring. With the cold weather and snow around the corner, there’s plenty of time for teams to jockey position.