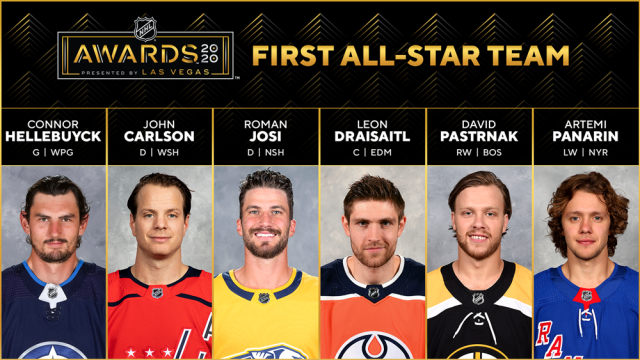 Yesterday, the NHL completed revealing their Awards for this extended 2019-20 season. One that’s still going following the Lightning edging the Stars 3-2 in Game Two of the Stanley Cup to even the series.

The All-Rookie Team featured Makar and Hughes on the blueline with Kubalik, Nick Suzuki and Victor Olofsson up front. Merzlikins was the goalie.

Also announced was the winner of the Vezina. It went to Connor Hellebuyck. In becoming the first Winnipeg Jet to be recognized by NHL GMs as the league’s best goalie, he beat out Tuukka Rask and Andrei Vasilevskiy. Jacob Markstrom finished fourth.

Draisaitl made it a clean sweep by taking home the Ted Lindsay Award (formerly Pearson) as the most outstanding player as recognized by his peers. He won it over MacKinnon and Panarin, who I felt could’ve been the winner for this award. Especially given who he played with at five-on-five. The Rangers weren’t in the same league as either Colorado or Edmonton, who also boasts McDavid and Ryan Nugent-Hopkins.

Even though he came up short, Panarin was named to the First All-Star Team (seen above). There are no surprises with the team looking like this.

Here is the Second All-Star Team.

If there were a third team, it would’ve been pretty good. You could’ve had Andrei Vasilevskiy in net with defensemen Jaccob Slavin and Cale Makar along with Connor McDavid centering Patrick Kane and Alex Ovechkin. Not bad. There’s a combined five Harts (Ovechkin 3) and a Vezina.

Regarding the Awards which also saw Sean Couturier take home his first Selke Trophy as the best defensive forward, beating out Patrice Bergeron and Ryan O’Reilly. It’s mystifying that they gave Bruce Cassidy the Jack Adams over John Tortorella and Alain Vigneault. Unbelievable.

For Panarin, it was a successful season on Broadway where he led the Rangers in scoring with 95 points (32-63-95) to tie MacKinnon for fourth overall. His plus-36 rating paced all NHL forwards. No one had more even strength points than the Bread Man who wound up with a league best 71 (25-46-71). That is mostly playing with Ryan Strome and Jesper Fast on the second line. It speaks to Panarin’s unique talent.

Who will he play with next year? Strome is a restricted free agent and due a raise. A year away from unrestricted status, will the versatile center be back on a one-year contract at say $4.8 million? Between him and Tony DeAngelo, the Rangers don’t have a lot of room to work with. Fast is a UFA they’d like to bring back with Alex Georgiev and Brendan Lemieux both Group II free agents.

The organization must reach a decision with Henrik Lundqvist, who isn’t expected to return. Will it be a buyout, a trade or even a retirement announcement? Who knows. We’ll have to wait and see how things go this off-season.

One that promises to be strange and exciting given the calendar. Normally, they’re in full camp mode playing preseason games. Instead, the Stanley Cup will conclude in a week crowning a new champion. The first buyout period is coming up. Then, you’ll have a Virtual Draft where the Blueshirts will make it official and select top rated Canadian prospect Alexis Lafreniere first overall on October 6. Rounds 2-7 are Oct. 7.

There’s a lot around the corner as the first official day of Fall is here. It’s sure to be fascinating.