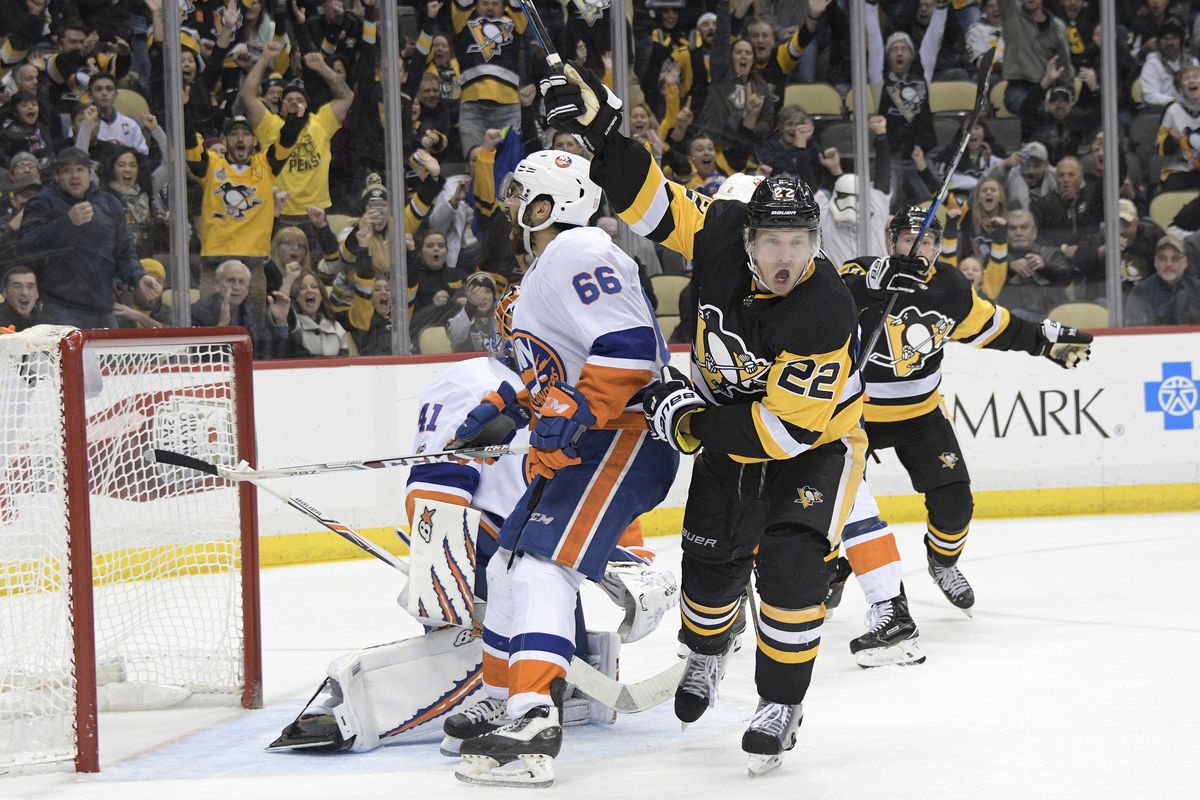 Matt Hunwick celebrates his overtime winner much to Joshua Ho-Sang’s dismay as a Islanders rally fell short in a 4-3 overtime loss to the Penguins. AP Photo via Getty Images

In a wild and crazy game between old Patrick Division rivals, the Islanders rally fell just short. However, they were able to come back and score twice in a 3:43 span late in the third period to gain a point in a 4-3 overtime loss to the Penguins on the road.

They persisted and that paid off. It was a entertaining game between two high scoring teams who can ramp it up.  The Pens did half their damage on special teams scoring two power play goals. Jake Guentzel got the scoring started when he was able to redirect a Kris Letang point shot past Jaro Halak for the lone goal in a first controlled by Pittsburgh. Evgeni Malkin added a assist.

After being outshot 15-6, the Islanders picked it up in a much stronger second. They began to dictate the play with their forecheck. They generated quality chances and more shots (13-7) on rookie Tristan Jarry. However, the Pens 22-year old netminder made some key stops. The only goal he allowed was on a follow up by the red hot Jordan Eberle (12th) during a mad scramble in front. The former Oiler was able to steer in a Ryan Pulock rebound from Nick Leddy at 5:53.

But in a period where the Pens took the only three penalties, the Islanders weren’t able to capitalize enough. It almost cost them.

In the first part of the third, it was the Isles aggressive forecheck that kept the Pens pinned in for a couple of extended shifts. The John Tavares line with Anders Lee and Josh Bailey had some close calls along with the second line centered by rookie Mathew Barzal. At the end of a shift, Barzal blocked a shot and came in two on one with Joshua Ho-Sang. But Jarry shrugged off Barzal’s point blank shot to keep it tied at one.

With Scott Mayfield off for tripping, the Pens went to work. It took less than a minute for the sizzling Phil Kessel to take a Letang pass and rifle home a laser top shelf for his 14th at 7:29. Sidney Crosby helped set it up. Letang got the puck to Kessel and he stepped around and used his lethal wrist shot to beat Halak for a 2-1 lead.

Halak made things worse when his misplay behind the net led directly to Riley Sheahan beating him top shelf from Carl Hagelin to give Pittsburgh two goals in a 32-second span. They had a two-goal lead with less than 12 minutes to play.

But the Isles have been resilient all year. Just when it seemed they had nothing, Barzal threw a innocent backhand on net that fooled Jarry to cut it to 3-2 with 4:53 remaining. A smart play by a polished freshman who now leads all rookies with 27 points. His emergence is the biggest difference for why the Islanders are near the top of a crowded Metro Division. Mayfield and Casey Cizikas notched assists.

Trailing by one, the Isles put on a all out attack to find the equalizer. After a near miss from Kessel which would’ve sealed it, Brock Nelson banged one home from Andrew Ladd and Thomas Hickey with Halak pulled at 18:50. He got loose in front and put in his eighth to force extras. On a good shift by Tavares, Ho-Sang and Lee, Lee nearly won it with his backhand narrowly missing to send it to OT.

Not astonishingly, the three on three didn’t last long. After the teams traded chances, the Pens caught Ho-Sang out for a long shift. It was Matt Hunwick who played the unlikely hero putting in a Bryan Rust rebound at 1:29 to give the Pens the win.

The point earned gave the Isles 35 putting them in a four-way tie for second place with idle Columbus, the Capitals and Pens. They all trail the Devils by a point. New Jersey hosts the Blue Jackets Friday. The Rangers visit Washington and sit four back of the Devils with 32 points.