As training camp opens, Kreider a sounding board on Lafreniere and Rangers 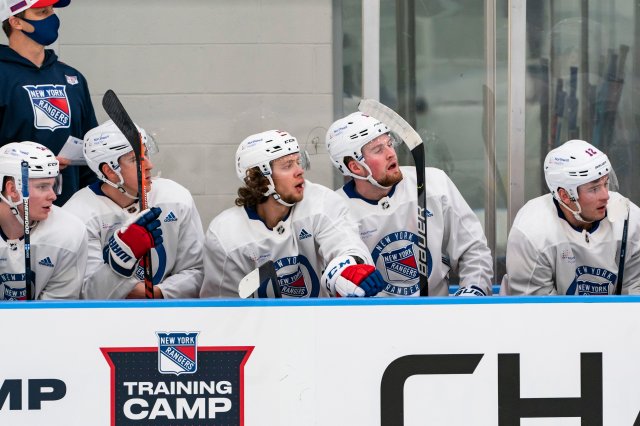 The look on the bench says it all. A wow moment is coming for some new Rangers. AP Photo by New York Rangers via Twitter.

"We know we've got the skill. We know we bring a dynamic offensive game. The thing that's been echoed throughout the first few days here is we don't sacrifice offense to play defense."

Hockey is back. For a few teams, they already officially started the abbreviated training camps early due to not qualifying for the postseason. Now, all 31 NHL teams are back to work in preparation for the start of a 56-game 2021 season. The fun begins on January 13 for some teams while for others, it’s Jan. 14.

For the Rangers, they’ll have the top cross-town rival Islanders on the schedule in 10 days. The countdown is on. Even if it’ll once again be without fans due to COVID-19 restrictions, it all starts up for real. Fifty-six games with every single one against your own reformed divisions. That means we get Rangers/Islanders eight times. That includes the first two to start. You better believe it’ll be fun.

Chris Kreider is looking forward to it and a lot more as he and his teammates which include top pick Alexis Lafreniere get ready for what promises to be a four month sprint from Winter to Spring. Basically, going from ice cold to warmer temperatures in May. If they’re lucky, they’ll get to continue the journey further.

By that, I’m obviously referring to the ultra tough East Division. It’s an eight team division that includes the old Patrick Division of the Capitals, Devils, Flyers, Islanders, Penguins and Rangers. Plus two classic Adams rivals in the Bruins and Sabres. Both of who should fit in. Especially when you factor in the history between Boston and New York along with the classic Bruins/Flyers battles. The Sabres get to stay in state and form even more intimidate rivalries with the Islanders, Rangers and the Devils. They certainly have had some epic playoff series versus the Flyers along with heartbreak to the Pens. There’s something for everyone in this division that featured five legit playoff teams last year. What does that mean for the Rangers, Devils and Sabres? It won’t be easy.

But to hear Kreider tell it, he can’t wait. You know a player who’s been around for nearly a decade loves the idea of playing all these rivalry games. He definitely sounded enthusiastic in the Zoom conference above when speaking to reporters about a variety of topics. That included the excitement surrounding Lafreniere, who he praised for his skills. When talking of the newest Blueshirt, he spoke highly of how the puck just is on a string when the teenager has it. He’s played with him before. So, he knows what the kid from Quebec City is capable of.

Welcome to the show, kids. It's good to have you. #PlayLikeANewYorker pic.twitter.com/1WCs8OvvOR

When asked about how he handled last year with questions surrounding his contract status, he was very candid in acknowledging that after 20 games, he was able to refocus and do what he knew he was capable of. As Kreider basically pointed out, you can only control what you can. Something he’s seen plenty of times with former teammates. He didn’t need to cite any names. Instead, he spoke of the hard cap and how from year to year, they know the roster isn’t going to look the same. He spoke from experience on how other players handled the pressure and weight of expectations and uncertainty due to free agency. Not knowing isn’t easy. That the now Rangers’ leader was able to reach agreement on a new contract that keeps him on Broadway had to be a relief. He’s seen many popular teammates leave due to such complicated situations.

For the most part, the Rangers are intact for the upcoming season. However, Kreider was also asked how strange it was not to see [Henrik] Lundqvist, [Marc] Staal and [Jesper] Fast. Of course, all three are in different situations. While Staal prepares with the rebuilding Red Wings and Fast gets going with the contending Hurricanes, who are in a different division due to realignment, Lundqvist won’t be donning a Washington Capitals number 35 jersey. It’s still hard to believe that the affable 38-year old all-time Rangers franchise great needs open heart surgery. He will miss the season. What that means for his career, who knows. It could be over. I would love to see him come back only if he’s medically cleared for ’21-22. He’ll be 39. We can only hope and pray as fans that the final game wasn’t a loss to the Hurricanes in a very brief stay at the Toronto bubble.

Listening to Kreider, you can tell the team misses all three. He called them three of the nicest people he’s ever known. That speaks to the quality of Lundqvist, Staal and Fast. They were important locker room leaders who set a good example for a younger roster to follow. Having also watched former Ranger Mike Rupp talk about Lundqvist, he heaped high praise on how committed and competitive his former teammate was while discussing him on NHL Network. This is a former Stanley Cup hero in ’02-03 who used to play on the other side of the Hudson rivalry. He wasn’t a Ranger too long, but certainly respected what Lundqvist brought to the table. Listening to him speak was as good as it gets. I’ve heard Kevin Weekes channel similar thoughts about Hank.

It definitely sounds like all three players will be missed from a leadership standpoint. However, that means more significant roles for some key Rangers. While coach David Quinn tries to figure out if the team will have a captain, they’re still waiting on top finisher and number one center Mika Zibanejad to report. He’s been delayed due to quarantine. In the meantime, Brett Howden has taken practice rushes with Kreider and Pavel Buchnevich. For now anyway, Kaapo Kakko has supplanted Fast as the right wing on the second line with Ryan Strome and leading scorer Artemi Panarin. Basically, that means Quinn prefers continuity for now with the top six.

It also would mean Lafreniere starting on the third line alongside Filip Chytil and Julien Gauthier. While I understand why Quinn would want to keep the top two lines intact, I believe longterm, you’ll eventually see Lafreniere bumped up. He’s got too much skating, talent and playmaking ability to be on the third unit. However, if that’s where he starts it could benefit Chytil, who really must step it up. He needs to prove he can be relied upon as a center. That means more consistency and some improvement on face-offs. It really is an important year for Chytil, who could replace Strome if he’s moved.

The Rangers center situation remains a question mark entering the New Year. Strome fit in well with Panarin last season producing career bests. On a deeper team, he’s better suited on the third line. There certainly will be added pressure to perform now that he got a bump up in pay over the short-term. We’ll see what he can do for an encore.

In order for the team to have success and seriously challenge for a top four spot, they’ll need both Kakko and Chytil to perform well. They must show improvement so that Quinn isn’t always throwing all his eggs in one basket. Ditto for Buchnevich, who must prove he can start off better than past seasons. This is a contract year. With recent first round pick Vitaly Kravtsov is playing for Traktor Chelyabinsk in the KHL, Buchnevich could be a goner if he doesn’t prove himself. Sure. He’s been a much better second half player and adjusted to Quinn’s no-nonsense approach. But it’s about consistency. Will he be worth that next contract or does he become a cap casualty due to the likely stagnant $81.5 million max?

The start of it all. pic.twitter.com/dyIBNxTHRE

If they are to become a more balanced team up front, that means Lafreniere positively impacts who he plays with. It also means either Gauthier or Brendan Lemieux improve. Lemieux is the more hard-nosed forward who plays on the edge. He must remain more disciplined and be on the right side of the ledger when it comes to drawing penalties and not taking them. It also means chipping in a few more goals. Something he’s capable of. He’ll start on the fourth line with Howden and possibly Kevin Rooney or Phil Di Giuseppe. Morgan Barron will also try to make the club out of camp which will include a couple of game like scrimmages. There is no preseason.

For now, Quinn has decided to shift Tony DeAngelo to the left side where he’ll get a chance to pair up with Jacob Trouba. That will be worth following. I liked what I saw when Quinn tried DeAngelo with brilliant rookie Adam Fox in search for more offense. Both are superb skaters who can transition the puck quickly and create puck possession and offense. Maybe the second pair of Ryan Lindgren and Fox eventually gets split up. I could potentially see Lindgren getting a shot with Trouba as a shutdown first pair while DeAngelo-Fox work together to form a very fast second pair who can turn defense to offense. It all depends on what happens early.

If Quinn is committed to a team top four D, what about his bottom pair? It can’t possibly be veterans Brendan Smith and Jack Johnson. I don’t see that working out well for either. Keep an eye on K’Andre Miller and Tarmo Reunanen. The best hope for the team is Libor Hajek shows enough improvement to break into the lineup. He’s a good enough skater. The defense is a concern. If he can make the leap, then they’re not relying as much on Johnson and Smith. They even signed vet Anthony Bitetto as insurance.

The organization boasts plenty of promising defense prospects. They include Nils Lundkvist, Zac Jones, Matthew Robertson, Miller, Reunanen, Braden Schneider and Hunter Skinner. With Schneider having a good game for Canada in the U20 IIHF WJC semifinals against Russia, there’s a lot of promise for the future. Jones has also been a fast rider with his improvement at UMass-Amherst. We’ll see about how ready Miller is. He’s young. There’s no reason to rush him unless he forces his way into the conversation.

As for the goalies, it’s all on the Russian tandem of Igor Shestyorkin and Alex Georgiev. There will surely be more pressure on both with the recently turned 25-year old Shestyorkin expected to be the starter. Georgiev has been a good backup. Now, there’s no security blanket with Lundqvist no longer around. They’ll have to push each other and be consistent. We know the capability of Shestyorkin and it’s exciting. This time, there are expectations.

That’s all for now. You pretty much got the full breakdown. We know the East Division will be tough. I’ll examine it more this week.