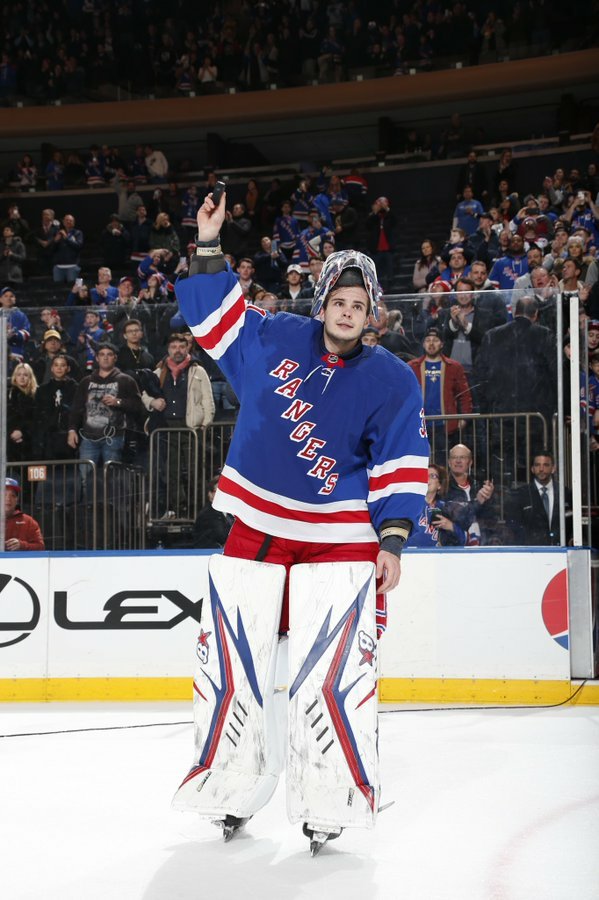 It’s without a doubt a big Saturday for the Rangers. Entering play two points out of the second wildcard that the Islanders are clinging onto, they know any misstep now could prove costly. That’s why the Devils visiting The Garden tonight is dangerous.

Not in the conventional sense. But with the close Hudson rival having improved under interim coach Alain Nasredinne, they’re no longer a pushover. So, if the Rangers take them lightly, it’s at their own risk. The Devils are fresh off a 4-2 home win over the Western leading Blues, who just went into MSG and beat the Blueshirts 3-1 to sweep the season series.

New Jersey has nothing to lose. Playing spoiler, they’ve quietly turned their season around. Even without Taylor Hall, whose new team the Coyotes are in danger of missing the playoffs, The Devils play hard for Nasreddine. They’re getting excellent goaltending from rookie Mackenzie Blackwood, who leads all first-year netminders in wins (21) while putting up respectable numbers that include three shutouts with a 2.71 GAA and .916 save percentage on not the best roster. He will be in net later.

Will it be Igor Shesterkin for the Blueshirts? Having already taken full part in team practice with no restrictions despite the rib fracture suffered in a car accident less than two weeks ago, the 24-year old Russian could be ready to go tonight. If he is, it’s the best case scenario for the Rangers with Alex Georgiev tailing off the past three starts. Despite having his worst game of the year, he was bailed out by the remarkable five goal game from Mika Zibanejad on Thursday night. A performance so good that it should merit first star of the week honors.

Tony DeAngelo got in on the fun by interviewing Mika yesterday on reviewing the instant reaction of clueless fans when he was acquired from Ottawa for Derick Brassard. This segment is priceless! Between DeAngelo’s humor and Zibanejad’s calm reaction to the hate and his smile, it’s one of the best productions the Rangers have given us.

Tony & #NYR Twitter have one thing in common: There’s nothing they love more than broadcasting their hot takes.

In our *most dramatic episode ever*, Tony goes 1-on-1 with 5-Goal Mika to talk Twitter takes – specifically, yours on July 18, 2016 – and how well they aged. 👀 pic.twitter.com/inywTTYyDB

If it is Shesterkin, it’ll be interesting to see if he can stay sharp after missing two weeks. He’s won nine of his first ten starts while putting up NHL records. No rookie had ever started this well and had four 40-plus save games that they won. It’s very impressive. Especially the poise with which he plays with. He’s the real deal. If he is back, you hope they’re not rushing him. Long-term is more important than short term even in a playoff race.

On your usual hectic Saturday, you have the Islanders hosting the Hurricanes at 1 PM. A game that’ll draw considerable interest from our fans. Who do you pull for? Carolina of course. Even if they have one fewer point than the Rangers, you don’t want the Islanders getting any points. They have 78 with a game at hand. So in spite of being winless in five (0-2-3), they’ve managed to pick up three points. You don’t want a three point game.

Carolina has more games left, but still have the unstable goalie situation. Petr Mrazek is getting closer to returning. The Canes can score goals, but aren’t as explosive since the loss of defenseman Dougie Hamilton. I’ve seen some of our fans point out that they haven’t won since Brady Skjei was traded there. It’s a bit unfair to blame the former Ranger for their goalie issues. David Ayres is looking better by the day.

Other games of interest include the Canadiens at the Panthers, the Caps at the Pens and the Flyers putting their eight-game win streak on the line against the Sabres. By virtue of one more win in regulation and overtime (ROW), Washington still leads the division. Both the Caps and Flyers each have 87 points while the Pens have 84. The Blue Jackets don’t play until 10 PM with a visit to red hot Edmonton. They’re locked into the first wildcard with 79 points, but only 14 games remaining.

The Panthers are still in play for both the wildcard and third place in their division due to the Leafs losing 2-1 at the Ducks. They also lost to the Sharks. Yikes. Toronto still leads the Cats by five points with 79. They only have 13 left. Florida has 74 points and 15 left. So, I guess you root for Montreal. They have 71.

There’s been a lot of overreacting to David Quinn deciding to flip Kaapo Kakko and Julien Gauthier. When the game begins after 7 PM, it’ll be Gauthier on the third line with Filip Chytil and Brett Howden. Kakko will start on the fourth line with Greg McKegg and Brendan Lemieux.

This isn’t a big deal. Kakko wasn’t good defensively the other day on for three goals against. Even though he had an assist on the Zibanejad power play goal for his fourth of the night, Kakko wasn’t good. He got moved down in the third period actually. That’s why when I see a few of our fans outraged by the change, it’s obvious they’re not paying attention. I was at the game and picked up on it. These people are either spending too much time on their phones or following biased blogs that overemphasize analytics.

We have to keep in mind that Kakko is 19. It’s his first year. While his offense has picked up (maybe not production wise), he still is inconsistent on the backcheck. You can’t have that at this crucial time of year. Especially in the playoff race. Who ever would’ve believed they would be here two months ago? Even following the All-Star break, in seemed far fetched to think they could make a run. Here they are with 15 games left only two points out with the first tiebreaker of regulation wins (30) in their favor.

No Chris Kreider again. But we know that. Quinn is right about this group. They’re resilient and have plenty of character. Even if it started badly with consecutive losses to the Flyers, they played the Blues toe to toe only to lose in crushing fashion. Then won a wild game over the Ovechkin Caps 6-5 in extras due to Zibanejad’s theatrics. I’ll never forget it. Nobody who was there will.

The lines for the start will only have the one tweak.

I don’t know that yet. Nobody does. Usually, it’s Lundqvist who backs up. But what if Shesterkin does start and has to come out? Who would you rather have in relief? I don’t like asking these questions because I don’t want to jinx it. But it has to be considered.

I would imagine the power play units will look like:

If you’re wondering what the Devils still have, Kyle Palmieri is the top scorer with 23 goals and 43 points. He usually plays with Nico Hischier and Jack Hughes. But last game, they actually tried Miles Wood on the left side and had Hughes on a different line. Nikita Gusev quietly has 42 points (12-30-42). He’s normally on the third line due to defensive deficiency. He’s a good power play threat due to his playmaking.

Jesper Bratt has 16 goals and 16 helpers. He is similar in style to Carl Hagelin. A speedster with good two-way capability, the Swede works hard and can create opportunities due to that quick transition. Hischier has 34 points in 56 games. It’s another disappointing year for the former first overall pick with injuries and roster subtractions hurting his production. At some point, he needs to stay healthy and fulfill his potential. A solid two-way center, he’s capable of becoming a 60 point player who can play all situations.

Pavel Zacha shows flashes of what made him a high draft pick. But his lack of finish is hard to fathom. The 23 assists are fine, but eight goals including three on the power play and two shorthanded means he isn’t getting it done at five-on-five.

Keep an eye on Joey Anderson. A tenacious worker who captained Team USA at the WJC a couple of years ago, he could become a gritty third liner due to his work ethic. He’s 4-2-6 in 16 games.

Travis Zajac is still around. While it’s been a tough season with the checking pivot only coming in with 23 points, he’s a hardworking two-way center who kills penalties well and can win big face-offs. You know what he is. At this point, he’s Mr. Devil replacing former captain Andy Greene, who’s now with the Islanders.

Damon Severson is the best offensive defenseman they have this season. He’s always good at jumping into the play. He has a good shot and nice offensive instincts. His eight goals and 29 points pace all Devils defensemen. That includes three on the power play. Defensively, he is bad. I’m not just talking about the minus-22 rating either. He can be beat in transition and in front of the net.

In his first year as a Devil, it’s been anything but successful for PK Subban. Seven goals and nine assists for 16 points with a minus-17 in 66 games isn’t what was expected. While he has come around lately, Subban is going to have be much better if he’s still part of it next season.

Not long ago, Will Butcher once put up 44 points (5-39-44) in his rookie season in ’17-18 to help get them to the playoffs. That included 23 power play points (3-20-23). Now 25 in Year Three, 20 of his 21 points have come at even strength. What is he? His role has changed. Maybe Hasan can shed some light on why. UPDATE: From Hasan’s preview, Butcher had thumb surgery. So, we won’t be seeing him until next season. That’s how out of the loop I am on the Devils blueline. My bad.

Believe it or not, Fredrik Claesson is part of the Devils blueline playing alongside Connor Carrick. Recently recalled, he had an assist on a Carrick goal against St. Louis. Dakota Mermis recorded his first NHL goal the other day. I know nothing about him.

This is who the Devils are. Yet they’re winning games due to good goaltending from Blackwood and even Cory Schneider. They are more scrappy.

So much for great expectations. Get the book.