Game #21: Determined Rangers make history with comeback from 4-0 down to stun Canadiens at House Of Horrors 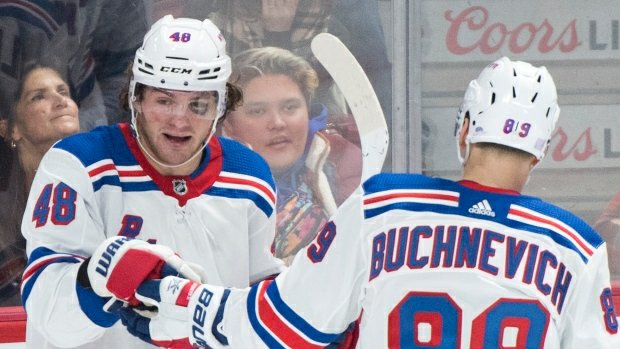 There are games and then There Are Games. What transpired just a little while ago at the Bell Centre in Montreal was unthinkable. The New York Rangers found a way back from a 4-0 deficit to stun the Canadiens for an improbable and thrilling 6-5 come from behind win in regulation at the House Of Horrors.

For one night at least, the Blueshirts erased a lot of old ghosts and demons that have haunted them up north against the Canadiens. They made some history along with it by showing tremendous heart and character in a great comeback victory that still feels unbelievable.

The @NYRangers overcame a four-goal deficit to win a regular-season game for the fourth time in franchise history. The others:

It was only the fourth time in franchise history they rallied from 4-0 down to win a game. Wow. It sure puts things in perspective. When you think you’ve seen it all including the Habs turning the tables on the Rangers to score five straight to pull out a 6-5 win a decade ago in the Tom Renney Era, the NHL’s youngest team somehow overcomes a off night for Alexandar Georgiev along with some follies that had me and friend Jonathan shaking our heads as we watched at his place. But he felt a comeback. So, I want to give him the credit for it once Filip Chytil scored his seventh that made it 4-1.

I'M NOT CRYING YOU'RE CRYING. pic.twitter.com/ODQrl6L5Uw

If there is a image of a player, who epitomizes this win it’s the black and blue Brendan Lemieux. A hard-nosed gritty forward who only knows one way to play. Balls out. He didn’t back down from a scrap against Tom Wilson in a home win over Washington that already feels like a lifetime ago. Not three days earlier. He plays so hard and the right way. It was really nice to see him get rewarded tonight with two enormous goals including the first shorthanded goal of his career that got the Rangers back to even at 5-5.

The evolvement of Lemieux has been crucial to the team’s success. Yes. He will have his moments where he loses discipline and takes bad penalties. However, after coach David Quinn makes an example out of him, he will come back harder and respond like the dedicated player he is. Right now, it’s the new Grate One who’s the straw that stirs the drink for these Black and Blueshirts. Yes. It applies. They don’t win pretty. They win by grinding and working like they had to to not be embarrassed again like the previous night at Ottawa.

There is the dynamic skill of artist Artemiy Panarin, who rebounded with his 12th goal and an assist after having his 12-game point streak snapped. However, it wasn’t only Panarin that was needed for this special comeback victory against an opponent they rarely beat up north. It was Lemieux going to the hard area in front to tip in an Adam Fox shot for a huge goal that cut the deficit to 4-3 after a power play expired. On the same play, Chytil got the jersey dirty by winning a battle to dig the puck out for Jacob Trouba, who wound up with an assist on that goal. He may not have gotten a point, but without Chytil’s hard work, that goal never happens.

There was a Pavel Buchnevich goal where he took the puck hard to the net and got rewarded when his shot deflected off a shaky Carey Price, who wasn’t able to protect what seemed like an insurmountable four goal Montreal lead. It was Buchnevich’s fourth of the season, and one that opened the door for a Rangers comeback. The goal made it 4-2 less than a minute following Chytil’s beauty set up by Panarin off a good rush from the otherwise defense challenged Brady Skjei. At least he used his skating and contributed two assists. That would include a key defensive play later that led to Lemieux’s shorthanded goal.

The Rangers scored three in a row so quickly within a 3:20 span that it actually made fans believe they could pull this off. Somehow, a game the more rested Habs had in control on a pair of Max Domi goals sandwiched around an Artturi Lehkonen goal and then a Shea Weber goal that went right through Georgiev at 2:51 of the second period, became a rallying cry for a desperate team.

They rose up. Even after failing miserably on a two-man advantage for 33 seconds with a chance to draw even, the Rangers never gave up. Not even following a bad sequence from Ryan Strome, who after winning a defensive draw was unable to clear the zone and failed to pick up Lehkonen, who whistled in his second of the game on a great feed from Domi (2 goals, assist) at 5:20 for a 5-3 Habs lead.

I thought that was it. However, on the next shift, some tremendous work by the new trio of Strome, Kreider and Panarin resulted in the Bread Man cashing in his team-leading 12th to make it 5-4 just 31 seconds later. It was a splendid forecheck started by Strome, who somehow managed to get the puck to Kreider, who made a brilliant backhand saucer feed for a Panarin tip in at 5:51.

With 17 points in the month of November, Artemiy Panarin Ties Pat Verbeek (1995) for most by any Ranger since 1980 #PlayLikeANewYorker @artemiypanarin pic.twitter.com/5nlozdyW2x

Whenever you trail a game by a lot, there are casualties. Quinn shortened his bench and got desired results. Unfortunately, Tony DeAngelo (minus-two in 10:13), Libor Hajek (minus-three in 13:01) and Kaapo Kakko (minus-three in 13:49) sat for stretches during the comeback. If the coach applied the same discipline to Skjei and other vets, that would be better. You can’t argue with the end result.

DQ nearly pulled Georgiev, but didn't.
"One of the things I was thinking, you bring Hank in, you might ignite the crowd. It’s a little dramatic when you bring a guy in in this building, because he’s got to come in through the tunnel, and there’s a big hoopla, bringing him in."

He mixed up his lines and got what he wanted. Jesper Fast was moved down to the third line with Brett Howden while Lemieux was promoted to a line with Chytil and Buchnevich. At one point, Strome and Chytil switched spots. It was hard to keep track. We were also flipping to the dreadful other Garden outfit, the Knicks. Talk about atrocious.

As tough a night as he had that made me long for Igor Shesterkin, Georgiev deserves some credit for hanging in there. He didn’t show frustration over some of the goals he allowed. Particularly, the second Domi one with a slight Trouba screen, and the brutal one to Weber unscreened. He was called upon to make key saves and did. Even if he was shaky.

The Lemieux shorthanded goal was a great play by him and Howden. After Skjei forced Montreal into a sloppy turnover, Lemieux took off with the puck and got it over to Howden, who got it back to Lemieux for a tap in at 8:40. That it came following a tacky interference minor on Panarin that had me referencing, “Montreal, Typical!”, was poetic justice. You should’ve seen Quinn’s reaction on the bench to the call.

With the game hanging in the balance, the Rangers again got caught for too many men on the ice. Another bench minor by a team that gets too many. Thankfully, they got the job done in large part to an aggressive Lemieux, who took away time and space from Brendan Gallagher in the slot to force a turnover and clear the zone. He had extra motivation with proud Dad Claude Lemieux watching with their family. It was odd to see him rooting for the Rangers.

Welcome to the squad, Claude. pic.twitter.com/IoYdy3asAF

By the way, in case you're wondering about the Too many men penalty, this one was Lemieux's fault.
"I’d like to give him another black eye for that too many men on the ice, but he played too well, so I won’t do that,'' DQ said (kiddingly).

On a Strome clean win in the offensive zone, Trouba took a long seeing eye wrist shot that banked in off a stunned Price through traffic for a 6-5 Rangers lead with 7:50 remaining in regulation. Credit Kreider for going to the net and taking Montreal defenseman Jeff Petry with him to create a perfect screen. There was no way Price picked it up until his late reaction. The puck took a favorable bounce and made it two straight games with a goal for Trouba. Both goals oddly similar. He had a goal and assist.

This one. Big one. pic.twitter.com/WU61Ginpmh

Following the successful kill of the bench minor which really is on the coaching staff to get fixed, it was up to Georgiev. He made a couple of important stops on tricky shots and left no rebound. As hard a night as it was for him personally, he wound up with 38 saves and the victory.

It’s one they won’t give back. One I’m sure the Canadiens cannot believe they lost. At least that’s how a die-hard Montreal fan put it.

It was 4-0. I don’t know what else to say. I’m just really shocked right now.

Well, she did dream that Domi would score the first goal of the game. He wound up with two and an apple. Go figure.

“I like coaching this team so much. To see how excited they were after we won and what they put into it, on and off the ice – it’s a great feeling to watch them enjoy the moment.” pic.twitter.com/WTFr2S7Nah

Personally, this is the best win by the Rangers in quite some time. They showed amazing resolve and persevered to get the ‘W’ in hostile territory. Winning at Montreal is as good as it gets on a Saturday night. Kudos to them for not giving up.

gonna tell my kids this is Rocky. pic.twitter.com/DrMnQ5dUyo

Derek Felix is sports blogger whose previous experience included separate stints at ESPN as a stat researcher for NHL and WNBA telecasts. The Staten Island native also interned for or hockey historian Stan Fischler and worked behind the scenes for MSG as a production assistant on New Jersey Devil telecasts. An avid New York sports fan who enjoys covering events, writing, concerts, movies and the outdoors, Derek has covered consecutive Staten Island Yankees NY Penn League championships in '05 and '06. He also scored Berkeley Carroll high school basketball games from '06-14 and provided an outlet for the Park Slope school's student athletes. Hitting Back gives them the publicity they deserve. In his free time, he also attends Ranger games and is a loyal St. John's alum with a sports management degree. The Battle Of Hudson administrator and chief editor can be followed below on Twitter and Facebook.
View all posts by Derek Felix →
This entry was posted in NYRangers. Bookmark the permalink.