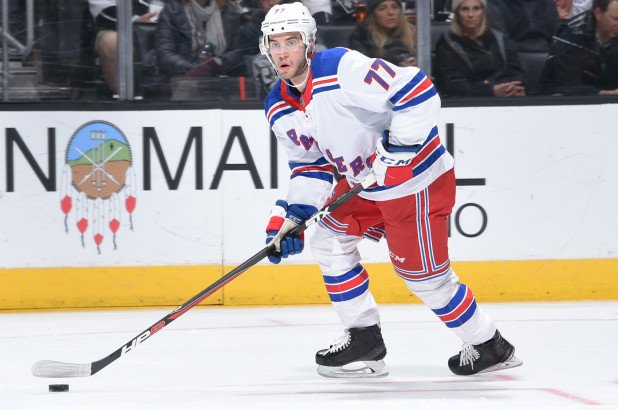 For those hockey brethren who are easily upset by a interesting young player who doesn’t have the best history so far, you might want to take a second look at Tony DeAngelo. In his second season with the Rangers, the 23-year old Sewell, New Jersey native looks to have finally found a home.

A former Lightning first round pick in the 2014 NHL Draft taken number 19 overall, the smooth skating right defenseman has taken some positive steps in his development. Following a trade from Tampa to the Coyotes, he only lasted 39 games with Arizona going 5-9-14 with 37 penalty minutes and a minus-13 rating as a 21-year old in ’16-17. Ironically, the second round pick the Bolts acquired from Arizona was used to select Libor Hajek. A D prospect they packaged with Vladislav Namestnikov, Brett Howden, a first round pick and conditional second to the Rangers in exchange for Ryan McDonagh and J.T. Miller. Go figure.

I found it odd that the Coyotes gave up on DeAngelo so early after acquiring him. There’s more than meets the eye when it comes to the emotionally charged defenseman. He’s had discipline issues dating back to his Junior days with the Sarnia Sting. When a talented player of his caliber gets suspended for abuse of an official more than once including as a member of the Coyotes, it speaks to a maturity problem.

After being mishandled by former coach Alain Vigneault after coming over with 2017 seventh overall pick Lias Andersson for Derek Stepan and Antti Raanta, DeAngelo has been handled much better under first-year be changed boss David Quinn. However, that doesn’t mean DeAngelo hasn’t tested Quinn’s patience. On more than one occasion, he’s been a healthy scratch for off the ice issues that won’t be tolerated. An area Quinn has hammered home while also disciplining other young players to toughen them up. He’s been very successful.

On the ice, DeAngelo gives the Blueshirts something they don’t have much of. A good skating defenseman who’s fully capable of contributing offensively. Even though he sat out a lot of games in the first half, the lightning rod with the killer personality has responded well to criticism.

On a offensively challenged team especially since the departure of top six forwards Mats Zuccarello and Kevin Hayes, DeAngelo leads all Ranger blueliners in D scoring with 28 points. That includes 24 assists with many primary helpers setting up goals like the power play tally Vinni Lettieri scored on Monday night for his first goal at MSG.

DeAngelo is a superb skater who possesses good vision. Able to find open teammates to create good scoring opportunities like the pass he made to Namestnikov who was robbed by Pens netminder Matt Murray, DeAngelo is a very good passer of the puck. Sixteen of his 24 assists have come at even strength. He’s also scored all four of his goals in that facet.

No, seriously @AnsonCarterLA wants to know if you saw that pass from Tony DeAngelo to Vinni Lettieri!! #NYR pic.twitter.com/MYDqx7lbKs

He’s also picked up eight power play assists. The latest example the perfect cross ice feed for Lettieri’s one-timer in Monday’s 5-2 home loss to Pittsburgh. By comparison, Kevin Shattenkirk has seven power play points including six assists on the man-advantage. Even with Quinn shifting him back to the top unit, most of the veteran’s success has come at even strength. Nineteen of his 25 helpers are at even strength. Similar to DeAngelo.

With six games remaining including tonight’s tough Original Six match up at Boston, DeAngelo needs two more points for 30. That would be a good achievement considering what he’s been through. Mostly self inflicted.

A restricted free agent this summer, he’s the most skilled defenseman the current roster features. DeAngelo has shown a propensity to play the game on the edge. He’s been a willing participant during scrums and isn’t shy about dropping the gloves if it means standing up for teammates. Unfortunately, Kyle Okposo learned the hard way.

Thankfully, Okposo has been able to come back for the Sabres. I wasn’t sure he would given his injury history. I’m glad he’s okay.

The thing about DeAngelo is he must learn to channel his anger. Quinn wants him to keep his emotions in check. He’s replaced Neal Pionk in the top four by forming a solid pair with veteran Marc Staal. They’re much more effective due to DeAngelo being more consistent than Pionk, who’s the same age. The difference is he wasn’t drafted or highly thought of.

In 55 games, DeAngelo has four goals and 24 assists for 28 points. He’s also a respectable plus-three on a team that was eliminated from the playoffs for a second consecutive year on Saturday. But he also has 60 penalty minutes which is the most of any current Blueshirt. One more than recently converted forward Brendan Smith.

If he is to become more successful in the future, DeAngelo must stay disciplined on and off the ice. He still has a tendency to take ill advised penalties. With the coaching staff trusting him to play key minutes (19:17 ATOI), they need him on the ice. Not in the penalty box.

They also don’t need these type of risky hits like the one he delivered on Jared McCann.

The hit caught a prone McCann up high and was dangerous. It could easily be a suspension if NHL Player Safety deemed it worthy of say two games. You never know what they’re thinking. The last thing DeAngelo needs is to further damage his reputation.

If he can keep his head screwed on straight, he has a chance to be a good player for the Rangers during their rebuild. Maybe he can even fulfill that potential. It’s up to him.

Derek Felix is sports blogger whose previous experience included separate stints at ESPN as a stat researcher for NHL and WNBA telecasts. The Staten Island native also interned for or hockey historian Stan Fischler and worked behind the scenes for MSG as a production assistant on New Jersey Devil telecasts. An avid New York sports fan who enjoys covering events, writing, concerts, movies and the outdoors, Derek has covered consecutive Staten Island Yankees NY Penn League championships in '05 and '06. He also scored Berkeley Carroll high school basketball games from '06-14 and provided an outlet for the Park Slope school's student athletes. Hitting Back gives them the publicity they deserve. In his free time, he also attends Ranger games and is a loyal St. John's alum with a sports management degree. The Battle Of New York administrator and chief editor can be followed below on Twitter and Facebook.
View all posts by Derek Felix →
This entry was posted in Column and tagged Column, David Quinn, Jared McCann, Marc Staal, Rangers, Tony DeAngelo, Vinni Lettieri. Bookmark the permalink.