Game #72: Nothing Wild about latest Rangers loss to Minnesota 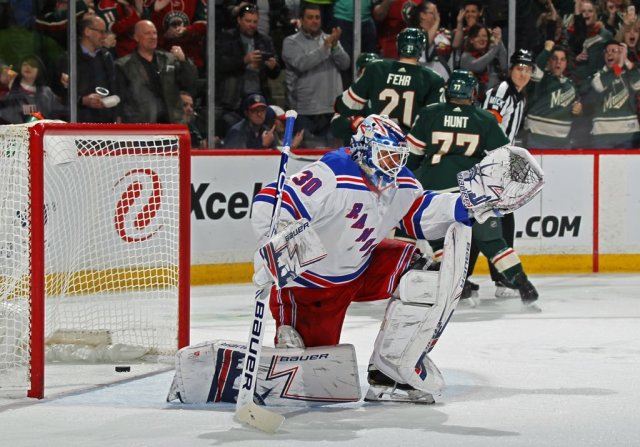 A beaten Henrik Lundqvist can only look on as the Wild celebrate a goal in the latest Rangers loss. AP Photo via Getty Images courtesy Minnesota Wild.

Like I stated before in the previous game recap, there’s nothing fun about these games now. Sure. The Rangers have yet to be mathematically eliminated from the postseason. But with 10 games remaining, that’ll soon come. They can only get to 89 points with the lowest ROW in the Eastern Conference. So, the tragic number is basically down to five. Once Carolina and Columbus reach 90, it’s officially over.

Last night, the latest defeat came to a desperate Wild by a count of 5-2 in St. Paul. Unlike Friday’s loss to Calgary, coach David Quinn felt the team didn’t ‘cheat the game.’ He was understandably upset with the players after losing to the Flames because he felt like they’ve fallen into some bad habits. That might be true. However, it’s not easy right now. No matter how you slice it, this is a younger roster that lost three key veteran players including two of its best forwards.

“We’ve just got to keep fighting and moving forward, and we’ll get a chance to address some things in practice which we haven’t had a chance to in a while, so hopefully that will help us.” – #NYR Coach Quinn pic.twitter.com/PwcyaU7JTS

Understandably, there’s been a drop off in their play. You don’t like to see it. But when the power play continues to fire blanks with the latest 0-for taking them to 1 for their last 30, it’s no coincidence that it’s coincided with the trade deadline moves of Kevin Hayes and Mats Zuccarello. With only a handful of players able to perform on the man-advantage, the timing has been off. It doesn’t help that they’re not shooting the puck. There’s been way too much passing and turnovers that lead to easy clears.

In allowing 46 shots to an average Minnesota team fighting for their playoff lives, it sums it up. The current crop of Blueshirts are very bad. Give them credit for being competitive in one goal losses to the likes of Tampa and Washington. Lately, the roof has caved in. They went 0-3-1 on the four game road trip with their only point via an overtime loss to mediocre Edmonton. To quote Brendan Lemieux, “It sucks.”

That’s what Lemieux says often following losses while at his locker. He’s certainly been a good addition to the group. A gritty, physical and hard working player who can get underneath the skin of opponents, the former Jet has been a lightning rod for a rebuilding team that will need that type of good character guy moving forward.

You tend to notice him during shifts because he’s very active. Even when he’s not scoring, Lemieux is mixing it up with opposing players such as Minnesota heavyweight Marcus Foligno during a scrum. Too bad the refs wouldn’t let them go. They weren’t beating them on the scoreboard.

It was another night where the Rangers were outgunned. The Wild aren’t a high scoring club by any stretch. But they have enough good players to make a difference in a big game they needed. They’re chasing both the Coyotes and Stars. They’re two behind Arizona and trail Dallas by three with 10 games left. That should be a good race to follow with the Blues only two points up on the Stars for third place in the Central Division. Plus the Blackhawks, Avalanche and even the Oilers are still in it.

Minnesota got two more goals from deadline steal Ryan Donato. The son of former NHLer Ted Donato is making the Bruins look foolish for trading him. Meanwhile, ex-Wild center Charlie Coyle has yet to register a single point. That’s hard to believe. It’s not like he’s a bad player. He has struggled this year. You would’ve thought a scenery change would help on a playoff contender. Boston is winning games without him.

.@DonatoRyan got the @mnwild out of the gate with two first-period goals in a win at home! Hear from the forward: pic.twitter.com/ZDwCYSARai

Donato is up to 11 points (4-7-11) in 12 games since coming over. At the time the deal was made, I was shocked Boston gave him up for Coyle. I guess they didn’t want to overpay for a better center such as Hayes by parting with another first round pick. They lost the Rick Nash trade, which was rather unfortunate. I forgot to mention that he and his family were recently back at MSG to drop the puck before the Devils game. That was nice.

A good young player who looks like he’ll be a capable scorer, Donato continued his roll by converting on a two-on-one from Pontus Aberg for a 1-0 Wild lead. He used Aberg as a decoy before beating Lundqvist short side. Prior to him getting his second of the period, a miscalculation by Minny starter Devan Dubnyk led directly to Mika Zibanejad scoring from a strange angle into an open net 80 seconds later for his team-leading 28th. Dubnyk misplayed a puck turning it over right to Kevin Shattenkirk, who got it to Zibanejad for his odd bank shot off Dubnyk that hit the far corner of the vacated net.

In a period where Henrik Lundqvist was under siege facing 18 Minnesota shots, he had no chance on a Luke Kunin shot that Donato redirected for a 2-1 Wild lead at 16:05. On the play, rookie Filip Chytil got caught napping by letting Donato sneak behind him for the deflection. Chytil has really struggled defensively during his scoring slump. He had a tough game finishing minus-three.

“The best thing about this group is how hard we always work. I like that. That’s a big plus.” – Henrik pic.twitter.com/J0fMLIZfqv

Of course, there was an own goal in this game. Why wouldn’t there be? Eric Staal had a pass attempt go off a sliding Neal Pionk right between Lundqvist, who was anticipating the pass across. That was the only goal in the second. Lundqvist made some good stops to keep his team within two.

In the third, a sloppy Chris Kreider turnover forced Brett Howden into a slashing minor penalty while Lundqvist denied a Brad Hunt scoring chance. Blame Kreider for not knowing better. It was a lazy play from a veteran who’s hit the skids. Since the deadline, he’s now 0-for-10 in goals with only two assists. He remains stuck on 26 goals. Will he snap out of it and find his way to 30 in the final 10 games? It would be a bitter disappointment if he didn’t.

Now we know why Spurgeon is always yelling KEVIN!!

Of course, the Wild took full advantage with a wonderful power play goal scored from Jared Spurgeon. He was the beneficiary of a great passing play started by Zach Parise to Kevin Fiala. Down low, Fiala found enough room to thread the needle to a wide open Spurgeon for a nice one-timer that beat Lundqvist upstairs. It was the defenseman’s 13th. Without Matt Dumba, he quietly leads Minnesota D with 13 goals. The point gave him his first 40 point season. A former Islanders sixth round pick in 2008, Spurgeon has always been a good player. He’s only listed at 5-9, 167. Maybe he’ll finally get recognition.

Encouraging is the continued improved play from third-year right wing Pavel Buchnevich. He’s been one of the only bright spots during a brutal stretch that’s seen the Blueshirts go 1-5-4 since the trades. On a very patient play by Tony DeAngelo in the neutral zone, he waited before making a soft backhand lead pass for a cutting Buchnevich, who gained the Wild zone and split the D before sending a good backhand through the five-hole of Dubnyk to make it 4-2 with 11:04 left in regulation.

Pavel Buchnevich is a man on 🔥🔥🔥 #NYR pic.twitter.com/w4h6fpU6rn

It was Buchnevich’s fifth goal in the last eight games. He’s up to 17. Despite missing a month, the 23-year old Russian has a shot at 20 goals. Considering how his season had gone with the Quinn Bin part of the process along with a broken thumb, it would be a good accomplishment for a player who doesn’t always think shot. His 17.7 shooting percentage ranks second behind Ryan Strome (19.0). It’s safe to say that he’s learned more in one year under Quinn than he ever did under former coach Alain Vigneault. The improvement is a result of him listening to Quinn and being more aggressive. There’s hope that he can turn out to be the player first thought of. That’s a good thing for the future of the team.

That was as close as they got despite 41 saves from Lundqvist, who could only shake his head following J.T. Brown’s empty netter that was way too easy. I laughed at it.

I guess that’s all you can do sometimes. All the losing becomes numb. If you can’t have a sense of humor when you watch, what’s the point? When your team becomes like Benny Hill, you may as well find something to smile about. There’s only 10 more games to go. Thank God.