Lias Andersson should play in these games 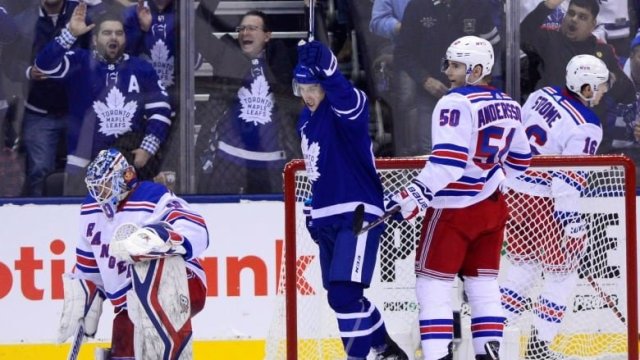 Sorry. There won’t be a recap of tonight’s 3-2 overtime loss in Edmonton. There’s no point. Speaking of which, that’s all the Rangers do these days is get one lousy point due to the lame NHL system. So, they’re now 1-2-5 in the last eight following Connor McDavid setting up Leon Draisaitl for the winner.

How bad is it? The team’s best player in the game, Brendan Lemieux referred to the three-on-three as, “It sucks to lose in the skill competition.” That’s all it is. A form of entertainment for fans to enjoy seeing extra points decided unless the five minutes aren’t enough. Then it’s that other annoyance.

Lemieux by the way posted a goal, assist and this fight below to record a Gordie Howe hat trick. He continues to play extremely well while fitting in perfectly with linemates Brett Howden (goal ended long drought) and Pavel Buchnevich (career high five hits).

That’s it for the game portion. The points don’t matter. What’s most important is the continued development of the young players. That’s why it’s extremely mystifying that 2017 first round pick Lias Andersson was a healthy scratch. The number seven overall pick isn’t getting enough ice time. When he plays, the 20-year old Swede continues to center the fourth line. Coach David Quinn also has given him some penalty kill shifts.

At this point with 13 games remaining, it’s ridiculous that Andersson doesn’t play more. When are they going to find out what he is capable of? They’ve wasted the first year of his entry level contract by treating him like a yo yo between Hartford and New York. Hardly ideal for a player GM Jeff Gorton took over Casey Mittlestadt as a key part of the Derek Stepan trade that also sent Antti Raanta to the Coyotes in exchange for that number one pick and defenseman Tony DeAngelo.

It’s understandable for fans of the Blueshirts to be frustrated. Some have already jumped to conclusions regarding Andersson when he’s hardly gotten enough ice time. By taking eight to nine shifts on the fourth line and logging around eight minutes, that’s hardly ideal for a player who performed well at the 2018 World Junior Championship for Sweden, who lost the gold medal to Canada. It might be hard to remember, but that same center scored six goals and added a assist while captaining the Swedes to a silver medal he tossed away in frustration.

He doesn’t possess the world class skill of Filip Chytil, who the same Rangers took with the 21st overall pick in the 2017 Draft. In his rookie season, the 19-year old has scored 10 goals and added 11 helpers for 21 points in 65 contests. He got into nine games last year going 1-2-3. The Czech has had his ups and downs recently becoming part of the Quinn Bin for a few games. But he has demonstrated some of the talent the organization believes he possesses by scoring a few highlight reel goals.

Andersson is a grittier player who works hard during shifts. It’s his work ethic that got him taken so high. While there remain doubts about what his ceiling is, it’s worth noting that only a handful of players from that ’17 Draft have played in the NHL. The count is up to 24 with 17 coming from Round One, including Andersson and Chytil. Ironically, Chytil’s 24 points place him seventh in scoring behind Robert Thomas (25 points), Mittlestadt (26), Miro Heiskanen (28), Nolan Patrick (57), Elias Pettersson (58) and Nico Hischier (96).

The point here is it’s too early to judge Andersson, or anyone from this class. That even includes Patrick, who the Flyers took second overall behind Hischier, who’s performed well for the Devils after going number one. Pettersson went number five to the Canucks. Based on his rookie year that has him as the Calder favorite, one could argue that he should’ve gone higher. But don’t forget it’s Year One for him.

Regarding the Rangers’ refusal to give Andersson a real look, it doesn’t make sense. There’s no way Connor Brickley should be playing over Andersson in Game 68 of 82. That’s a joke. It’s a wasted opportunity having him sit out this late in a season where the team isn’t playing for anything. With 69 points, they’re not making the playoffs for a second consecutive season.

If it truly is a rebuild as they insist, then Andersson has to play. Not only as a checking line center. They need to see what they have. He’s only gotten a small look in the top nine. So, he remains at a goal with four assists for five points in 29 games. That’s after going 1-1-2 in seven last Spring.

Jesper Fast is a hard working player, who is a solid leader that always brings it every shift. The fact he’s playing hurt and continuing to receive regular turns in the top six with only eight goals is absurd. Nothing against him. But it’s ridiculous to keep playing him that many minutes while Andersson rides the pine.

I understand what Quinn’s doing. He’s establishing a certain criteria that all his players must earn to be moved up. He even benched Chris Kreider recently by sticking him on the fourth line. Kreider only took two shifts in the third period of a game last week, and got a shift in overtime. The same Kreider has gone seven straight games without a goal. He’s stuck on 26 with 13 games left. He can’t be 100 percent.

Here’s the thing. At this juncture, the coaching staff know what they have in vets like Fast, Vladislav Namestnikov, Ryan Strome, Jimmy Vesey, Kreider and leading point getter Mika Zibanejad. They continue to evaluate Howden, who got his fifth goal in game number 53. Howden is definitely a player Quinn likes. The soon to be 21-year old center who was acquired as part of last year’s blockbuster deadline deal with Tampa, likes to hang onto the puck and remain patient before making plays for teammates. He’s gotten a lot more of a chance than Andersson.

There are still those remaining 13 games to give Andersson a chance to earn more of a look than he’s received. If he is indeed part of the future, what do they have to lose? Do they really view him similarly to Boo Nieves, who’s 25 and just got a one-year contract? That would be very disappointing and short sighted.

This can’t be handled like past Rangers’ first round picks who we hardly knew. Manny Malhotra. Cough. Jamie Lundmark. Cough. Lauri Korpikoski. That is part of the team history. So, for every Kreider, J.T. Miller or Marc Staal, there have been classic cases of the franchise changing its mind on young players they thought highly of. Don’t forget they once traded up for Pavel Brendl and gave away Marc Savard to grab Lundmark. Oops.

As for Quinn’s reasoning on why DeAngelo sat out, that’s better left unsaid. DeAngelo is the best defenseman they have. It would be a shame for him to waste his talent due to off ice issues. He has to know that. Who would you rather see? The highly skilled DeAngelo or Neal Pionk. Next question.

Hopefully, Quinn removes the handcuffs off Andersson. Time is wasting.