A Day of Reckoning? Pressure on Rangers to beat winless Coyotes with Vigneault’s job on the line 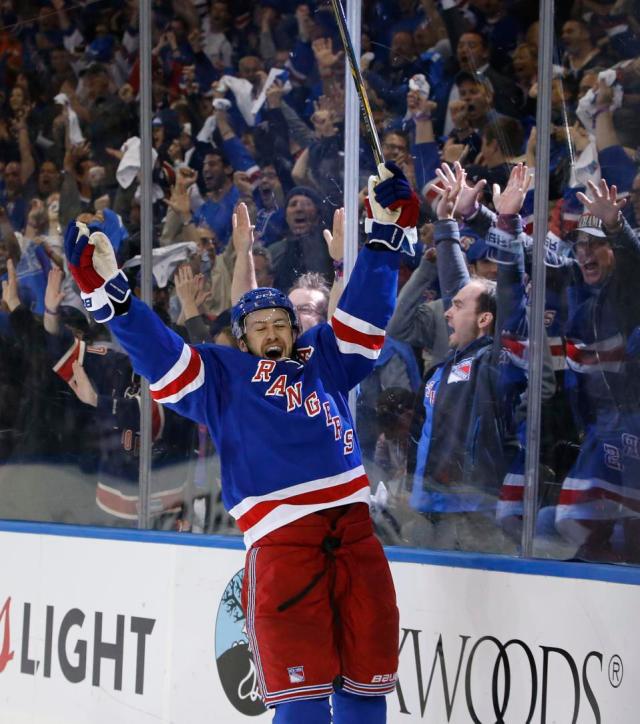 Derek Stepan returns to The Garden in what will be a emotional night. While Stepan’s new team aims for its first win, his old team is off to a poor start. Could the coach’s job be on yhd line? AP Photo by Kathy Willens/Getty Images

Technically speaking, it’s only the 11th game of the season. But when the Rangers host the Coyotes, a lot could be at stake.

Coming off another listless performance in which they were booed off home ice in a 4-1 loss to the Sharks, they find themselves in a 2-6-2 hole sitting last in the Metro and 15th in the East.

Pressure is mounting on the players and especially on the coach to turn it around. With a winless Arizona team in town, they need to win this game tonight.

If not, it could be the end for Alain Vigneault. A likable bench boss who has been a good fit with this team. Over the first four years, he guided them to a Stanley Cup Final, President’s Trophy and within a period of consecutive trips. They have been one of the NHL’s elite topping 100 points while making the playoffs seven consecutive years dating back to the John Tortorella days.

While Vigneault has come under fire for some questionable decision making with personnel, there’s enough veteran leadership to do better than two wins in the first 10 games.

With former top pivot and key piece Derek Stepan returning for what should be a emotional night, the microscope will be on the Rangers.

This isn’t what GM Jeff Gorton or Vigneault expected. Even with the roster changes that cost them Stepan and key backup Antti Raanta along with key leader Dan Girardi, they weren’t supposed to sink faster than The Titanic.

With 72 games remaining, there’s plenty of time to change the script. However, Vigneault might not survive. Losing to the Coyotes could be the day of reckoning. Cue Bane.

Derek Felix is sports blogger whose previous experience included separate stints at ESPN as a stat researcher for NHL and WNBA telecasts. The Staten Island native also interned for or hockey historian Stan Fischler and worked behind the scenes for MSG as a production assistant on New Jersey Devil telecasts. An avid New York sports fan who enjoys covering events, writing, concerts, movies and the outdoors, Derek has covered consecutive Staten Island Yankees NY Penn League championships in '05 and '06. He also scored Berkeley Carroll high school basketball games from '06-14 and provided an outlet for the Park Slope school's student athletes. Hitting Back gives them the publicity they deserve. In his free time, he also attends Ranger games and is a loyal St. John's alum with a sports management degree. The Battle Of New York administrator and chief editor can be followed below on Twitter and Facebook.
View all posts by Derek Felix →
This entry was posted in NYRangers and tagged Alain Vigneault, Coyotes, Derek Stepan, NYRangers. Bookmark the permalink.