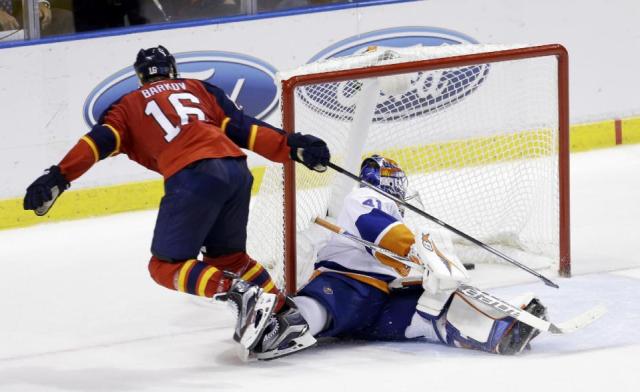 A Wild One: Aleksander Barkov pulls off a Forsberg in Round 5 making it nine consecutive shooters that scored in a wild Panthers shootout win over the Islanders. AP Photo by Alan Diaz/Getty Images

The Islanders and Panthers played perhaps the most exciting shootout ever. Don’t believe me? The first nine shooters scored. That’s right. Nine consecutive shooters beat the goaltenders. The Panthers prevailed 3-2 in the skill competition in a unbelievable conclusion.

”That’s the first time I’ve seen that,” Florida hero Aleksander Barkov said after his shot in Round 5 that beat Jaroslav Halak proved to be the winner. ”I think the fans were happy.”

For the Islanders, it was a missed opportunity. But they rallied from a two-goal deficit in the third on goals from Bridgeport recall Ryan Strome and Josh Bailey 3:03 apart. After two periods, they trailed 2-0 on goals from Brandon Pirri and Jussi Jokinen.

After an odd overtime that featured mostly 4-on-4 due to penalties, the Islanders and Panthers were destined for a shootout. And what a display of skill it was. Each skater took turns undressing the goalies. In this case, the Isles’ Halak and the Panthers’ Roberto Luongo.

First up was Pirri who calmly skated in and wristed one past Halak putting the Panthers ahead. Isles’ ace Frans Nielsen replied with his patented backhand top shelf.

In Round 2, Vincent Trocheck also beat Halak with a wrist shot to again put the Cats back up. But out came Kyle Okposo and he caught Luongo napping for an easy goal five-hole to even it.

The third round saw Nick Bjugstad also beat Halak with a wrister to make it 5-for-5. At that point, Islanders play-by-play man Howie Rose wondered along with all of the audience if a goalie would stop a shot. The answer was a resounding, ‘No.’ With the pressure to score, Islanders captain John Tavares deliberately walked in and slowed down before going to a nifty forehand tuck beating Luongo forcing extras.

At this point, you knew it was advantage shooters. Neither goalie showed much confidence. In Round 4, Jonathan Huberdeau who has trouble finishing in regulation went to a wrist shot that beat Halak for the fourth time. But with the Isles facing defeat, this time it was Bailey who delivered on his own wrister beating Luongo to make it eight straight shootout goals.

In the top of the 5th, Barkov actually tried something fancier. Rather than skate in and take the shot as the previous four Cats, he went to the classic Forsberg pulling off the backhand tuck to make it five in a row for the Panthers and nine in a row!

This time, the Isles went with Brock Nelson. The third-year forward was unable to beat Luongo who turned aside his point blank shot to finally give the Panthers a wild and crazy shootout win.

”I know it was very entertaining for the fans,” explained Panthers coach Gerard Gallant. ”We needed those two points and we got them. It’s been a tough stretch.”

”It just seemed like goals kept coming,” Islanders coach Jack Capuano said. ”Fortunately for them they got the one they needed.”

Derek Felix is sports blogger whose previous experience included separate stints at ESPN as a stat researcher for NHL and WNBA telecasts. The Staten Island native also interned for or hockey historian Stan Fischler and worked behind the scenes for MSG as a production assistant on New Jersey Devil telecasts. An avid New York sports fan who enjoys covering events, writing, concerts, movies and the outdoors, Derek has covered consecutive Staten Island Yankees NY Penn League championships in '05 and '06. He also scored Berkeley Carroll high school basketball games from '06-14 and provided an outlet for the Park Slope school's student athletes. Hitting Back gives them the publicity they deserve. In his free time, he also attends Ranger games and is a loyal St. John's alum with a sports management degree. The Battle Of New York administrator and chief editor can be followed below on Twitter and Facebook.
View all posts by Derek Felix →
This entry was posted in NY Islanders and tagged Aleksander Barkov, Brandon Pirri, Frans Nielsen, Islanders, Jaroslav Halak, John Tavares, Jonathan Huberdeau, Josh Bailey, Kyle Okposo, Nick Bjugstad, Panthers, Roberto Luongo, Ryan Strome, Vincent Trocheck. Bookmark the permalink.