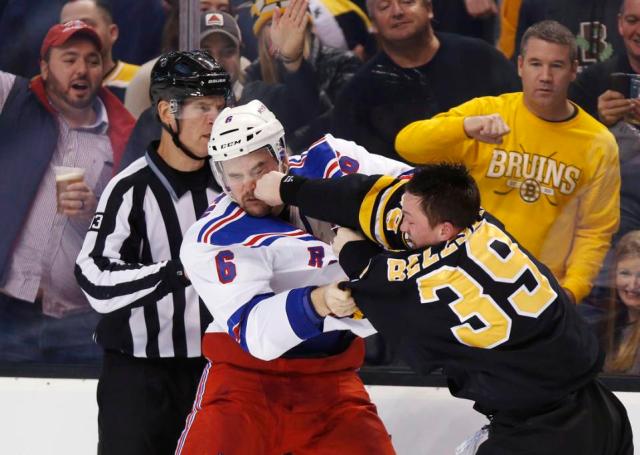 Dylan McIlrath takes a punch from Matt Belsekey during a fight in the second period. AP Photo by  Michael Dwyer/Getty Images

A loss of discipline sent the Rangers to a second straight defeat. Leading 3-2 on a power play goal from J.T. Miller, they fell apart in a disappointing 4-3 loss to the Bruins on Black Friday in a Thanksgiving Special on NBCSN.

Jesper Fast took a bad holding minor penalty with over five minutes remaining cost them dearly. Bruins second-year forward Ryan Spooner scored on the power play on a Loui Eriksson set up with 3:46 left in the contest. It was the B’s second power play goal. They converted two of three chances making the most of their opportunities.

Less than two minutes later, David Krejci got an unpredictable game-winner when his point shot took a funny deflection off Rangers forward Emerson Etem through a maze of players past Henrik Lundqvist with 1:43 remaining. Off a strong cycle, Boston outworked a make shift line that included Etem and Oscar Lindberg. Krejci’s ninth unassisted gave Boston the comeback victory at TD Garden.

The Blueshirts rebounded from an early Patrice Bergeron tally in the first period on goals from Lindberg (8th) and Nash (6th in last 4) 4:19 apart in the second period. The game turned when Bruins forward Matt Beleskey delivered a late hit on an unsuspecting Derek Stepan who went into the boards and down. That resulted in Dylan McIlrath seeking retribution by hammering Beleskey in a one-sided fight. Unfortunately, the silly instigator rule sent him to the box for 17 minutes (instigator and misconduct) handing Boston a power play.

Following some good passing, the Bruins cashed in thanks to a neat deflection from Brett Connolly in front on a Colin Miller point shot knotting the contest at 2-2 with 10:26 left in the second stanza. Connolly parked himself in front of Lundqvist and was able to get a stick on a good Miller shot to beat him. That was a theme for the Bruins who did a good job going to the net to score on one of the league’s best goalies.

The Rangers didn’t take many penalties. But when they did, they were unable to kill them off. Instead, it was the Bruins who had the right answer with a dogged worth ethic. They got the job done.

Despite a goal and assist from J.T. Miller, the Blueshirts were unable to bounce back from an ugly loss on Turkey Eve to the Canadiens. Miller put them in position when he was able to get a piece of a Keith Yandle point shot for a power play tally that gave the guests a 3-2 lead at 9:28 of the third. Miller got more time along with others after Stepan didn’t return due to broken ribs on the Beleskey hit that drew the ire of McIlrath. He’s out indefinitely.

Coach Alain Vigneault mixed up his lines once Stepan went out. He tried Miller with Kevin Hayes and the struggling Chris Kreider, who continues to baffle with uneven play. That Kreider didn’t register one shot and turned over the puck twice on a power play isn’t what’s expected. At this point more is expected of the 24-year old in his third year. He remains stuck at three goals in the team’s first 23 games. They need more from him.

Vigneault did make some changes off the Montreal disappointment reinserting McIlrath for Dan Boyle, who struggled on Wednesday. He also scratched Viktor Stalberg and put in Etem. Neither did much negative. Unfortunately, McIlrath stood up for Stepan and that idiotic instigator allowed the Bruins to tie it. Beleskey’s hit was questionable as it came late. Even though Stepan was prone and didn’t protect himself, it was ridiculous that refs Wes McCauley and Chris Rooney didn’t assess Beleskey a penalty other than the fighting major. It’s even more preposterous that McIlrath got an instigator for doing the right thing.

That’s what you get from a soft league that can’t distinguish what’s right and wrong. The bigger question is will we see McIlrath against the Flyers later today. Or will he disappear for Boyle until Christmas? That’s a question for the coach whose lineup decisions at times leave one puzzled.

Be that as it may, the Blueshirts have another game against the Flyers. It also is a matinee with a 1:30 start time. With Stepan out, it’ll be interesting to see what Vigneault does with the line combinations. He has the top line intact. But how he juggles the final three will go a long way to how the team performs over the next month. They lost one of their most dependable top six forwards. Stepan isn’t easily replaced in any facet.

With the schedule heating up, we’ll see what they’re made of. Lundqvist deserves a day off. He has played a lot so far. It’s time for Antti Raanta. Time to give Lundqvist a break. Something Vigneault hasn’t done much of due to Henrik’s hot start. He better soon.

Derek Felix is sports blogger whose previous experience included separate stints at ESPN as a stat researcher for NHL and WNBA telecasts. The Staten Island native also interned for or hockey historian Stan Fischler and worked behind the scenes for MSG as a production assistant on New Jersey Devil telecasts. An avid New York sports fan who enjoys covering events, writing, concerts, movies and the outdoors, Derek has covered consecutive Staten Island Yankees NY Penn League championships in '05 and '06. He also scored Berkeley Carroll high school basketball games from '06-14 and provided an outlet for the Park Slope school's student athletes. Hitting Back gives them the publicity they deserve. In his free time, he also attends Ranger games and is a loyal St. John's alum with a sports management degree. The Battle Of New York administrator and chief editor can be followed below on Twitter and Facebook.
View all posts by Derek Felix →
This entry was posted in NYRangers and tagged Alain Vigneault, Bruins, Chris Kreider, David Krejci, Derek Stepan, Dylan McIlrath, Emerson Etem, Henrik Lundqvist, Matt Beleskey, Oscar Lindberg, Rangers, Rick Nash. Bookmark the permalink.