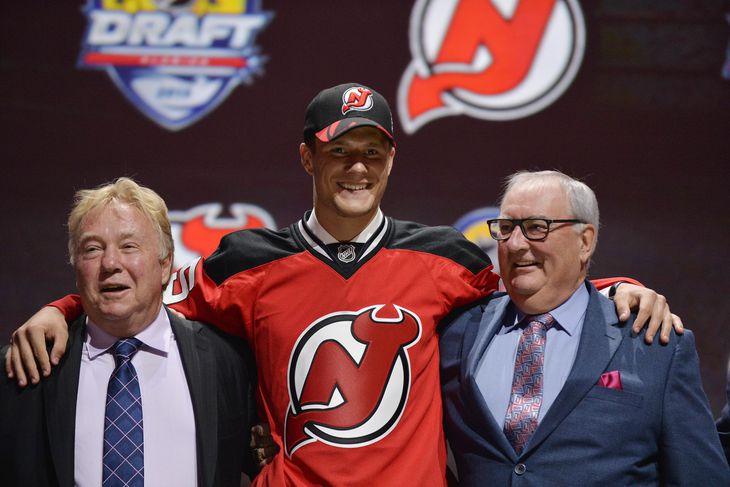 It’s not often when a scouting director being replaced is front-page news.  But then again, few scouting directors have had the career of David Conte, who was with the Devils for an incredible thirty-one seasons – or just one year fewer than the entire Devils franchise has been in New Jersey.  After being a scout and assistant director of player personnel in the early days under then-GM Max McNab (yes Conte was actually around pre-Lou Lamoriello, a fact that surprised me when I heard it today), Conte served as the team’s director of scouting for the last twenty-two years under Lou, becoming a pointman for drafting and scouting almost every important player in franchise history.

Perhaps with the sweeping changes in the Devils organization this offseason, Conte being let go was inevitable.  It’s still stunning to think just how much change has taken place in just one offseason – Lou out as GM, franchise icon Scott Stevens not being asked back onto the new coaching staff, fellow icon Martin Brodeur going back to St. Louis to continue his post-playing career in management there.  And now – after a simple but heartfelt press release today – parting ways with the 66-year old Conte, who was as much a part of the success of the 1994-2012 era as anyone.

“David and I have had numerous discussions regarding his future,” Shero said in a press release announcing the move. “Based on our conversations, I believe it is in the best interests of our organization for David to pursue other opportunities and to not renew his contract,. I would personally like to thank David Conte for his 31 years of service to the New Jersey Devils organization.

“His contributions to the success of the hockey operations department have been immense. The search for his successor will begin immediately.”

Where that search leads is anyone’s guess…I’m hoping it’s not one of the guys from Shero’s bad Pittsburgh drafts (remember Angelo Esposito?  Yuck…).  He could bring in someone from Nashville from his previous contacts there, but their forward drafting historically has been just as bad as ours was in the last decade.  Whoever Shero brings in likely won’t enjoy the success Conte did, recent dry spell with all non-defensemen aside.  Although he was still an assistant in 1990, he was certainly part of the decision making process when it came time to draft Martin Brodeur.  Other big successes followed, not all of them with high picks either.  Scott Niedermayer, Patrik Elias, Petr Sykora, Scott Gomez, Brian Rafalski, John Madden and Zach Parise are just some of the most high-profile successes, with Rafalski and Madden being UDFA signings.  Others like Bill Guerin, Willie Mitchell and Jason Smith had long, distinguished careers though they spent the majority of their NHL career elsewhere.  Arguably the Devils’ organization reached its zenith in 1995, when not only were they celebrating an NHL championship after the franchise’s first Stanley Cup, but also celebrated an AHL title in Albany, with a stacked roster filled with many draft picks who’d go on to have long careers in the NHL (Among others, Sergei Brylin spent time on both rosters that season and also went on to have his own distinguished career as a Devil).

Of course all good things must come to an end, and though the Devils have maintained a coda of building around defense with recent drafts that have churned out a majority of this team’s current and future blueline, they haven’t drafted a forward who’s made an impact at the NHL level since Adam Henrique in 2008.  Even Henrique for all his playoff heroics in 2012, is still just a borderline top six player.  And although Marty is the ultimate bragging right on any scout’s resume, they haven’t been able to draft NHL goalies since the early ’90’s (remember Ari Ahonen or JF Damphousse?  Both former first-round picks who never amounted to anything), although one-time UDFA signing Keith Kinkaid and current second-round pick MacKenzie Blackwood may finally give the team some organizational depth in goal.

Still I was resigned to hear this news, especially coming off a draft I think could be this team’s best in the last decade from top to bottom.  Conte himself has been around forever, and knew change was probably inevitable judging by his recent comments to beat writer Tom Gulutti:

“I’m not anticipating doing anything, but a lot of that depends on what Ray wants to do and I accept it all,” Conte said. There will never be an ounce of acrimony on my part. I’m so grateful to have been part of an organization that’s had this success and some of the great things that have happened and, more importantly, some of the great people I’ve met along the way.

“I met Scott Stevens when he was 18 years old.”

The bolded should serve as a fine coda to a distinguished tenure…I almost wrote career, but Conte may well remain in the NHL, especially since there are still teams that won’t be able to wait to throw their scouting director overboard to bring Conte in.  I don’t think he’s ready to retire at 66 anyway.

Like Loading...
This entry was posted in Devils and tagged Devils, Lou Lamoriello, Martin Brodeur. Bookmark the permalink.