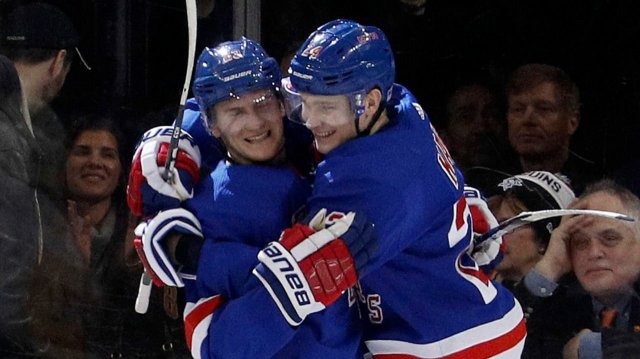 It took 16 games. Finally, Kaapo Kakko announced himself to the NHL. The number two pick of the 2019 Draft was sensational in recording his first career two goal game to highlight a thrilling Rangers 3-2 win over the Penguins in overtime.

That it came at the expense of the Pens made it more satisfying. A franchise that’s been gifted superstars Mario Lemieux, Jaromir Jagr, Evgeni Malkin and Sidney Crosby. They were without Crosby, whose status remains uncertain for their next game. However, Malkin played. Kris Letang did not. The great defenseman never can stay healthy.

It doesn’t matter. This was a good win for the younger Blueshirts over a quality opponent that’s used to missing players and still finding a way. Over the past week, we’ve seen the growth and maturity of the 18-year old Kakko. An emergency first-year player who is starting to show what the hype was all about. The powerful skating, strength and scoring touch are something to behold. He was the best player at MSG.

If Kakko starred by lighting up the Garden with two great goals including a thrilling overtime winner, then Adam Fox was the costar. The 21-year old smooth skating, right defenseman continues to improve in front of our eyes. In this one, he extended his point streak to five by recording a goal and wonderful primary assist that set up Kakko’s first overtime winner. He’s 2-4-6 over the hot stretch while forming a cohesive third pair with close USA World Junior Championship teammate Ryan Lindgren. They’re the Rangers’ best tandem right now. Both are 21 and growing in stature.

Not to be outdone, Alexandar Georgiev returned to the net after getting the past three games off. Back in as a starter for Henrik Lundqvist, the 23-year old Bulgarian was very good throughout. The only two goals he permitted came in a flat second that saw the Pens carry the play. Georgiev made some key stops en route to 30 for the game and his fourth win in eight games.

Without some point blank saves including one on Brian Dumoulin in the dying seconds of regulation, there is no big Kakko Moment. This was his night. He was dominant on many shifts including a monumental one where the Pens couldn’t get the puck away from him. He hounded it and nearly set up a go-ahead goal in the third period with the crowd buzzing. What an exciting player.

Kid never met a breakaway he didn't like. pic.twitter.com/LMN3p2Oqwu

The first period was as good a start as you can have. With the game still scoreless, Brendan Lemieux took a Tony DeAngelo pass in his own zone and made a great stretch pass that hit Kakko in stride for a clean breakaway. Once he moved in on Matt Murray, the dynamic kid from Finland went to his signature move by faking forehand and then going backhand deke around the Penguin starter’s outstretched pads. A beautiful tuck for his fifth of the season at 6:42.

What did you see in OT?

"Great pass by Foxy. It was easy for me." pic.twitter.com/mMDgpeE15d

I actually heard it on the radio called by Don LaGreca due to finishing my piece on Don Cherry and the toxic culture of social media. If you haven’t done so already, go read it. I got some very nice feedback from some followers including knowledgeable Canadian hockey fans. It was overwhelming. Just being able to interact with other people without it turning into a childish argument is progress. I think a lot of adults have a lot to learn.

The conclusion of the first was just as exciting. On a kind of a broken play where Filip Chytil lost the puck right to Artemiy Panarin, the Bread Man went to work and found a cutting Fox wide open for a laser short side, high glove on Murray for a 2-0 lead with 9.3 seconds remaining. It was another gem from Panarin, who tied the longest point streak of his career by extending to nine straight (4-9-13).

They are the hunters

WE ARE THE FOXES pic.twitter.com/vbNcUKpvnz

The Pens responded in the second period by getting two goals to tie the game up. The first one didn’t take long to materialize. On an extending shift from the Malkin line, he and Marcus Petterson combined to get the puck over to Justin Schultz. He skated in and from a tough angle was able to snap a wrist shot off the far bar and in at 1:13.

Malkin and Pettersson pick up the assists on the Schultz goal. pic.twitter.com/lfZKihIzKN

Over ten minutes later with Fox off for one of those annoying phantom hooks, a bad bounce allowed Dominik Simon to get the puck over for Jared McCann, who pounded it past Georgiev and home top shelf. His power play tally tied it up with 7:27 left in the stanza.

Saying it louder for the people in the back…

Despite the Pens holding a 11-7 edge in shots along with more puck possession, the score remained tied at two entering the third. In it, each team made it fun by using their skating to generate scoring chances. Neither sat back. There were a combined 20 shots with the Pens leading the way with a dozen to the Rangers’ eight.

While Georgiev held down the fort at his end, Murray did the same on the other. That included stoning Pavel Buchnevich on the doorstep and then turning away Brett Howden on a great Kakko feed. Both netminders were good. Murray finished with 24 saves.

In the three-on-three overtime, chaos ensued. It didn’t look good for the Rangers, whose three skaters were caught out for a long shift. But the Pens never could finish it off.

Instead, it was Buchnevich and Fox turning it around for a quick counterattack. As Fox carried the puck at center, the crowd anticipation was building. What followed was a brilliant centering pass for a Kakko tip in that won the game at 2:24 of OT. It touched off a nice celebration.

It was fitting that Kakko got the team’s first overtime win of the season. He was the best player and it was a game they deserved to win. He joined some exclusive company that includes some great names of 18-year old rookies to record a two goal game. Yes. Crosby and Patrik Laine are in that list. Nice job.

This was an enjoyable game with a nice result. Hopefully, they can build on it.

Been waiting for this one. pic.twitter.com/Qs02Z847rv