With just seven games remaining, the Rangers are closing in on a division title while chasing home ice. Currently second in the East with 101 points, they trail Montreal by a point with two games at hand. They enter tonight’s match at Winnipeg on a two-game losing streak. Having been badly outplayed this weekend by Boston and Washington, the Blueshirts look to get back in the win column with Henrik Lundqvist making his second start.

While they continue to battle for the conference’s top seed, it’s time to vote on the Steven McDonald Extra Effort Award. Named after former New York City police officer Steven McDonald, who was shot in the line of duty paralyzing him the prestigious award goes to the Ranger who goes above and beyond the call of duty. Last year’s winner was Mats Zuccarello.

This year, there are three candidates. Here are our choices. 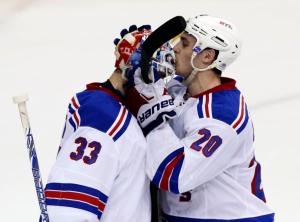 A.Cam Talbot-Forced into the spotlight when Lundqvist went down due to a sprained blood vessel, the league’s best backup stepped up going 16-4-3 with a 2.11 goals-against-average, .931 save percentage and two shutouts vaulting them into first place. Overall, Talbot’s 20-9-4 with a 2.21 GAA, .926 save percentage and five shutouts. 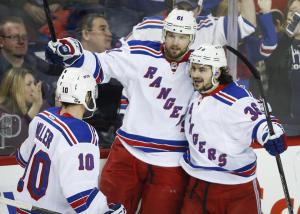 B.Rick Nash-Since the start, he’s been a constant. For the first four months, Nash was unstoppable putting up 37 goals and 58 points in the team’s first 60 games. A neck injury has limited him to three goals and seven points in 14 games this month. The team leader in goals (40), points (65), plus/minus (27), shorthanded goals (4) and game-winners (8) has been tremendous and should be up for the Selke. 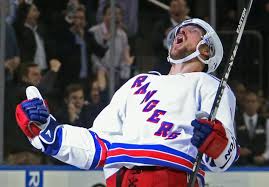 C.Kevin Klein-When Glen Sather traded Michael Del Zotto for Kevin Klein, no one could’ve predicted how well the former Predator defensive defenseman would play. A steady stay at home type with a low key approach, he’s busted out for a career high nine goals and 26 points while pacing all Blueshirts D in plus/minus (24). It’s no coincidence that the back end has struggled since he broke his arm. Undoubtedly, they’ll need a healthy Klein come postseason.

Derek Felix is sports blogger whose previous experience included separate stints at ESPN as a stat researcher for NHL and WNBA telecasts. The Staten Island native also interned for or hockey historian Stan Fischler and worked behind the scenes for MSG as a production assistant on New Jersey Devil telecasts. An avid New York sports fan who enjoys covering events, writing, concerts, movies and the outdoors, Derek has covered consecutive Staten Island Yankees NY Penn League championships in '05 and '06. He also scored Berkeley Carroll high school basketball games from '06-14 and provided an outlet for the Park Slope school's student athletes. Hitting Back gives them the publicity they deserve. In his free time, he also attends Ranger games and is a loyal St. John's alum with a sports management degree. The Battle Of New York administrator and chief editor can be followed below on Twitter and Facebook.
View all posts by Derek Felix →
This entry was posted in Battle News, NYRangers and tagged Cam Talbot, Kevin Klein, Rangers, Rick Nash, Steven McDonald. Bookmark the permalink.