Make it four in a row. The Rangers used a four goal third period to come from behind and defeat the Blue Jackets 5-3 last night at MSG.

They did some damage scoring three power play goals to complete a nice comeback win that got them back at .500 (7-7-2). Kevin Shattenkirk, Chris Kreider and Pavel Buchnevich notched big goals as they made the Blue Jackets pay for some undisciplined penalties.

I didn’t see the first due to one of the silliest and craziest things I’ve ever done. I left my debit card at the store where I work. I didn’t realize it until I was at the bank getting ready to take out money. The panic set in. Then I drove back in 20 minutes flat. Luckily, they had it. I couldn’t thank them enough.

On the way back, I flipped on Kenny Albert and Dave Maloney for the start of the second just in time to hear Artemi Panarin and Josh Anderson score to put Columbus up 2-0. The second sounded like one Henrik Lundqvist would’ve wanted back.

To their credit, the Rangers fought back thanks to some utter brilliance from J.T. Miller. On a rush up the left boards, he had the presence to send a one-handed backhand feed while down all the way to a wide open Michael Grabner, who beat Sergei Bobrovsky in front to get the crowd back in it. It was a huge momentum turning goal.

They spent the rest of the period pressing Columbus for the equalizer and nearly had it before time ran out. Miller fed Shattenkirk for a last second shot that deflected wide. Bobrovsky also made some tough saves.

The first of three Columbus penalties wound up in the back of the net. With Panarin off for high-sticking Ryan McDonagh, Shattenkirk took a Mats Zuccarello pass at the right point and let go of a perfect wrist shot that beat Bobrovsky through a great Kreider screen. That tied the score at two.

.@shattdeuces extended his point streak to five games tonight with a goal and assist. Hear what he had to say after tonight's #NYR win. pic.twitter.com/AHjFDanNFB

But with the momentum following a close call in the Columbus end, Boone Jenner outmuscled Shattenkirk to the net forcing Lundqvist into a save. The puck caromed behind the net where Brandon Dubinsky set up Oliver Bjorkstrand to put the Jackets back in front.

But a real good hit by Steven Kampfer on Zac Dalpe in terms neutral zone led to him retaliating with a elbow minor. That was the turning point. Such a bad penalty by a fourth liner had to infuriate John Tortorella.

As if to stick the knife in, the Rangers tied it again right off a good faceoff win by Mika Zibanejad. He won it back to Buchnevich for a quick shot that went off a Jacket body right to Kreider in front for a easy rebound goal. His fifth in the last six games.

With the crowd revved up, David Savard took a third straight bad penalty when he’s tripped up Grabner in the offensive zone. The look on Tortorella was priceless. His team basically imploded. 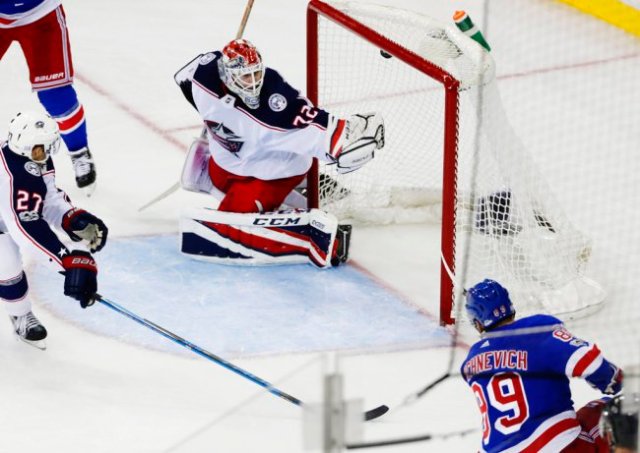 Pavel Buchnevich beats Sergei Bobrovsky on the power play for the game-winner in the third period of a Rangers comeback 5-3 win over th3 Blue Jackets. AP Photo via Getty Images

It took the Rangers just 12 seconds to score the go-ahead tally. On a wonderfully constructed play, Buchnevich and Zibanejad worked a give and go with Zibanejad finding a wide open Buchnevich with a great saucer backhand feed for a one-timer into a open side for his sixth coming with 8:33 left. Buchnevich celebrated with a cool right pump of the arm. His go to.

Columbus didn’t quit. They spent some time in the Ranger zone with some sustained pressure. But Lundqvist made a couple of big stops and his teammates got out of trouble.

With Bobrovsky pulled, Alain Vigneault wisely stuck his best two defensive forwards on with Zibanejad to protect the lead. Out came Grabner and Jesper Fast. They got the job done with Fast making a defensive play and pass to the speedy Grabner, who pushed the puck ahead to himself for a empty netter with 49 seconds remaining on a delayed call. It would’ve been a goal anyway.

All in all, a rewarding victory for a suddenly rejuvenated team that’s turned the page. Next up are the hated Bruins visiting the Garden on Rivalry Night tomorrow. That should be fun. The intense disdain between Boston and New York is well documented. Although it’s not what it once was in the 70’s, 80’s and even 90’s, no two cities hate each other more.

The Bruins come in playing well having beaten the Wild 5-3. They’re 6-4-3 and could be one of the teams the Rangers fight for the wildcard. They’ll be without Brad Marchand, who’s day to day. That sucks for my fantasy team. But it’s a rebuilding year. I’m kicking myself for not taking Clayton Keller. At least I have the Devil duo of Nico Hischier and Will Butcher along with Mikhail Sergachev.

It’s nice to see the Rangers respond to the poor start by stringing some good performances together. Since Vigneault was on the firing line, he’s done a much better job with the lines and even made a vet accountable with Brendan Smith sitting out a third straight due to his hideous play.

Kampfer and Nick Holden have been fine. Holden has actually worked well with McDonagh. He has points in the last two. The odd couple of Kampfer and Marc Staal are together. They were fine last night. Shattenkirk and Brady Skjei are a thing that should remain.

Onto the next one.

Play of the Game

#NYR got on he board with this @grabs40 🚨! Stay tuned to @MSGNetworks or https://t.co/TMLf6zaGIh for the 3rd period. pic.twitter.com/ODMAD3yejA