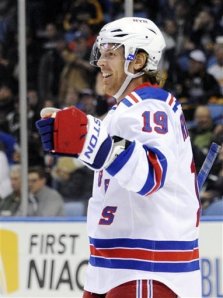 In a word, the shortened season was a nightmare for Brad Richards. He wasn’t consistent and looked a step behind. That led to a rift between him and John Tortorella. A coach he once flourished under winning a Conn Smythe and Stanley Cup in Tampa, suddenly decreased his ice-time and ultimately benched him in the second round against Boston. It had to hurt his pride. He wouldn’t be human if it didn’t.

When the Rangers fired Tortorella, talk focused on the players that turned on him. Henrik Lundqvist was the most vocal. He was non-committal to staying in New York past next summer forcing Glen Sather to take action. When the Rangers President and GM opted to keep Richards, it had to be a telltale sign that the veteran center went against his former coach. The club can still amnesty him next summer. At 33, he has something to prove. He sounds ready to play for Alain Vigneault.

“I had time at the start of the summer to reflect on last year and develop a game plan going forward,” Richards told New York Post Rangers beat writer Larry Brooks. “There were a number of things last year, starting with the uncertainty of the lockout, and there were times when a lot can snowball.

“Mentally, I can’t allow whatever struggles I’m going through to get to me. But last year’s in the past. I’ve dealt with that. I’m excited about this coming year and getting back to where I think my game should be.

“I know I can play the game. Sometimes I might have to defend myself a little bit to people who think I can’t play anymore. I’m very motivated. [Last season] kept me very hungry all summer.”

Despite his struggles, Richards still ranked third in team scoring with 34 points (11-23-34) in 46 games. He trailed only Derek Stepan (18-26-44) and Rick Nash (21-21-42). If he regains his form, he can still be an important player. It’s not like the club has a stud number one center. Stepan is coming off his best season but must prove he can do it over 82. He remains unsigned with the two sides continuing to negotiate a new deal. Figure it to be around what Adam Henrique got yesterday.

At 33, Richards should have some good hockey left. He’s one year removed from a 66-point ’11-12 (25-41-66) which included some clutch play in a tight seven-game Conference Semifinal win against Washington. He shouldn’t be written off. Even more, having him around for 2013-14 gives Vigneault some needed depth down the middle. Once Stepan signs, he’ll have the luxury of sending out a solid top three including former Jacket Derick Brassard, who led the team in the postseason with 12 points (2-10-12). Brian Boyle and Dominic Moore are better fits for the fourth line. Each can take faceoffs and kill penalties.

“I’m excited to have a difference voice [coaching the team] and a coach with a different view of how we should play that’s more focused on offense. It suits me and I think it suits everybody more on the whole team, to be honest,” added Richards.

“I know Alain a little bit and really like him as a person,” Richards said. “I don’t know him as a coach, but I’ve only heard good things about him from guys who played for him in Vancouver. I’m excited for this new chapter, this new voice and new view of how we’re going to play.”

Derek Felix is sports blogger whose previous experience included separate stints at ESPN as a stat researcher for NHL and WNBA telecasts. The Staten Island native also interned for or hockey historian Stan Fischler and worked behind the scenes for MSG as a production assistant on New Jersey Devil telecasts. An avid New York sports fan who enjoys covering events, writing, concerts, movies and the outdoors, Derek has covered consecutive Staten Island Yankees NY Penn League championships in '05 and '06. He also scored Berkeley Carroll high school basketball games from '06-14 and provided an outlet for the Park Slope school's student athletes. Hitting Back gives them the publicity they deserve. In his free time, he also attends Ranger games and is a loyal St. John's alum with a sports management degree. The Battle Of New York administrator and chief editor can be followed below on Twitter and Facebook.
View all posts by Derek Felix →
This entry was posted in NY Rangers. Bookmark the permalink.