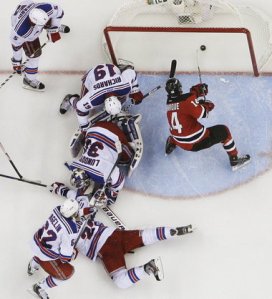 Henrique it’s over. The Devils have finally re-signed Adam Henrique. Per a tweet from the official Devils Twitter, the two sides reached agreement on a multi-year extension. Terms were disclosed.

Today we re-signed Adam #Henrique to a new multi-year contract. Please welcome Henrique back to #JerseysTeam!

A third round pick (82nd overall) in 2008, the 23-year old from Brantford Ontario has totaled 27 goals and 40 assists for 67 points in 117 NHL games. After an impressive rookie season that saw him finish third for the Calder and score the clinching goal against the Rangers in the Conference Final, he was inconsistent in his second year finishing with 11 goals and five assists in 42 contests.
UPDATE: Updating the terms on Henrique’s new contract. From James Mirtle:

Not sure I’d compare Henrique with Nazem Kadri. They’re different players. Kadri was a first round pick by Toronto in 2009. Thanks to the Leafs’ patience, he broke out in 2013 posting 44 points (18-26-44) in 48 games helping the Leafs reach the playoffs for the first time since ’04.  Over 99 games, he’s compiled 26 goals and 37 assists for 63 points. Ironically, he remains unsigned. So perhaps fans are speculating that he could get a similar contract to Henrique’s.

Henrique will earn a cap hit of $4 million per year. He’s signed through 2018-19. The Devils have made a long-term investment in the 2012 playoff hero. He’s clearly the most talented center they have on the roster. His development is crucial to the club’s future. It’s similar to Ranger center Derek Stepan, who also is restricted following a strong third year. Given what Henrique got and Edmonton’s Sam Gagner ($4.8 million cap hit through 2015-16) received, the cost just went up. Unless the two sides have a handshake agreement, it’s foolish on Glen Sather’s part to wait this long.

Derek Felix is sports blogger whose previous experience included separate stints at ESPN as a stat researcher for NHL and WNBA telecasts. The Staten Island native also interned for or hockey historian Stan Fischler and worked behind the scenes for MSG as a production assistant on New Jersey Devil telecasts. An avid New York sports fan who enjoys covering events, writing, concerts, movies and the outdoors, Derek has covered consecutive Staten Island Yankees NY Penn League championships in '05 and '06. He also scored Berkeley Carroll high school basketball games from '06-14 and provided an outlet for the Park Slope school's student athletes. Hitting Back gives them the publicity they deserve. In his free time, he also attends Ranger games and is a loyal St. John's alum with a sports management degree. The Battle Of New York administrator and chief editor can be followed below on Twitter and Facebook.
View all posts by Derek Felix →
This entry was posted in Battle News, Devils, NY Rangers. Bookmark the permalink.

1 Response to Henrique It’s Over