Vitali Kravtsov signs for one year with Traktor 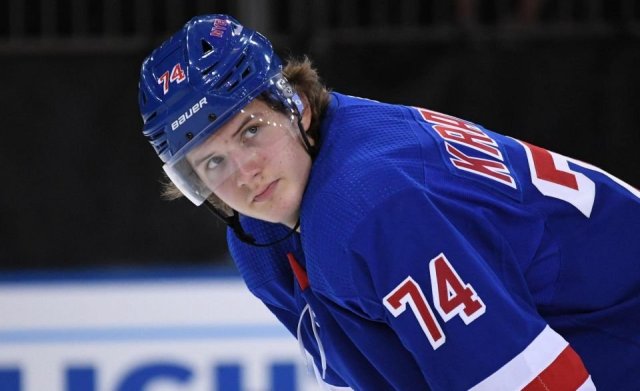 It's official! Vitaly Kravtsov loaned to Traktor Chelyabinsk in the KHL for the entire season, no re-call option. Great move for a kid who hasn't played since March. Get your kids on the ice. Development is key #NYR https://t.co/C8m0FFA8BI

In prospect news, Rangers former 2018 first round pick Vitali Kravtsov has signed with Chelyabinsk Traktor of the Kontinental Hockey League (KHL) for one year. The deal doesn’t include a recall clause.

It’s understandable why Kravtsov opted to play the 2020-21 season in Russia. Due to the COVID-19 pandemic, hockey won’t be restarting until the winter. With the NHL still in the second round of the playoffs, there won’t be a Stanley Cup winner until late September at the soonest. For a young player like Kravtsov, it makes sense to further develop with a team he’s familiar with at home.

Vitali #Kravtsov has signed a one-year deal with @HCTraktor1947. Traktor & @NYRangers agreed on a full season loan. So Kravtsov will play all 2020-21 season in #KHL. Btw, it is Kravtsov´s wish to spend all season in #KHLfi. #NYR #HockeyTwitter #NHL https://t.co/d83FjdBaB9

Both Steve Vogel and Russian insider Gillian Kemmerer had more on the 20-year old deciding to return to Traktor. It’s for the best. He probably wasn’t gonna to make the roster.

Re-upping this as #Kravtsov signs for the full @KHL season. Stability and minutes for this kid – doctor’s orders. https://t.co/lcmTeo1Opy

The more I read about this, the more I think the negotiations reg recalling Kravtsov are about him coming over once Traktor is eliminated, rather than after the KHL season ends on April 30th. Traktor and Kravtsov have a contract that ends April 30th, so that could be it #NYR https://t.co/4WZlRuHwVi

As much as we want to see him here, the situation is complex. If it were a normal year, the NHL Postseason would have wrapped up a couple of months ago along with the off-season which includes the NHL Draft and free agency. Instead, we have to wait until October 9 for the Rangers to make it official with prize prospect Alexis Lafreniere as the top pick. Don’t forget they have the Carolina first as well.

Considering that Europe can start earlier, it’s good for younger players such as Kravtsov and Lauri Pajunemi. That goes for most European prospects.

Another one to opt for Europe. Raska, 2020 draft eligible, played 7 games in the Czech Extraliga before moving to the QMJHL last year. This can improve his draft stock #NHLDraft https://t.co/fiYxsmrkN6

Adam Ruska is an 18-year old forward from the Czech Republic who is draft eligible this autumn. He played on the same team as Lafreniere for Rimouski Oceanic of the QMJHL. Not to be confused with 23-year old Rangers goalie prospect Adam Huska, who will likely share goalie duties in the AHL for Hartford with freshly signed Tyler Wall.

Don’t forget that any player who completes their season overseas can be recalled by the Rangers. Who knows. You might see Kravtsov by next Spring. Let’s hope so.

Derek Felix is sports blogger whose previous experience included separate stints at ESPN as a stat researcher for NHL and WNBA telecasts. The Staten Island native also interned for or hockey historian Stan Fischler and worked behind the scenes for MSG as a production assistant on New Jersey Devil telecasts. An avid New York sports fan who enjoys covering events, writing, concerts, movies and the outdoors, Derek has covered consecutive Staten Island Yankees NY Penn League championships in '05 and '06. He also scored Berkeley Carroll high school basketball games from '06-14 and provided an outlet for the Park Slope school's student athletes. Hitting Back gives them the publicity they deserve. In his free time, he also attends Ranger games and is a loyal St. John's alum with a sports management degree. The Battle Of Hudson administrator and chief editor can be followed below on Twitter and Facebook.
View all posts by Derek Felix →
This entry was posted in NYRangers and tagged Chelyabinsk Traktor, KHL, Lauri Pajunemi, prospect news, Rangers, Russia, Vitali Kravtsov. Bookmark the permalink.