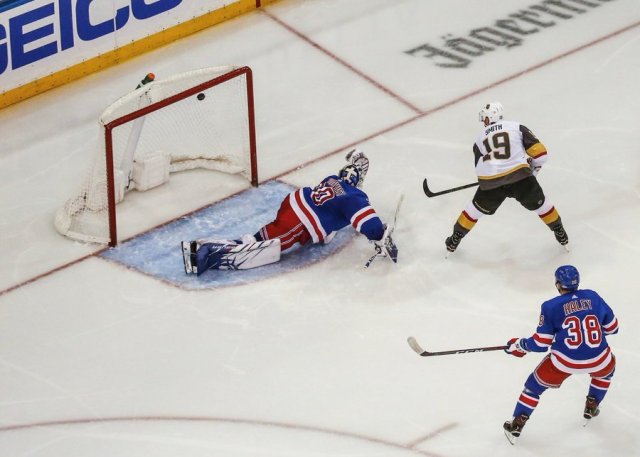 Reilly Smith flips a backhand past Henrik Lundqvist to convert a breakaway goal in a Golden Knights 4-1 win that cooled off the Rangers on Monday night. AP Photo by Vegas Golden Knights via Getty Images

Forget that five-game point streak. That’s over with. Forget the easy beatdown of a woeful Devils that got humiliated even worse at Buffalo. Will that be the end for John Hynes? I’ll leave that to Hasan.

Truthfully, I touched on it the other day. The Rangers got away with a C game at best by being sloppy and undisciplined due to the opponent. Had they faced better competition, it could’ve been ugly. But Alexandar Georgiev made the saves and the penalty kill scored two shorthanded goals.

Tonight, the competition picked up. The Rangers were unprepared for what the Golden Knights brought. They dominated the first half and humiliated the Blueshirts by scoring the game’s first four goals en route to a 4-1 win at Madison Square Garden.

What made it worse is David Quinn’s decision to go back to Henrik Lundqvist backfired. Instead of sticking with the hot hand in Georgiev, who made 33 saves for the shutout on Saturday, the second-year coach catered to Lundqvist. He had no one to blame for a hideous first goal that he put in himself at 1:34 when he mishandled an Alex Tuch shot and had both Tony DeAngelo and Libor Hajek make good defensive plays. It didn’t matter because he put the loose puck in himself. Replay confirmed the ugly start.

Sometimes, when this team gets off to bad starts, they implode. Well, it didn’t take long for that to happen. Following Lundqvist’s gaffe, Brady Skjei allowed a attacking Vegas player to get behind him. He took a holding the stick minor penalty 18 seconds following the first goal. This time, the penalty kill that was so good versus New Jersey allowed an easy transition that saw Tuch put away a Nate Schmidt feed at the doorstep for a two goal Vegas lead at 3:50.

Goals must be on sale tonight because @alextuch89 is buying in bulk 👌 pic.twitter.com/WKQte3epyM

It didn’t get any better. The Rangers continued to be sloppy due to a combination of poor puck management leading to turnovers and lax coverage. The Golden Knights fired shots from every angle, peppered Lundqvist for 17 shots. He did keep it at two.

Eventually, a couple of Vegas penalties gave the Blueshirts a chance to get back in it. That included a hard working shift by Brendan Lemieux, who got hooked down by Nicholas Roy. To no avail. The power play fired blanks throughout taking the collar in five chances. It’s not like they didn’t create shots. However, Malcolm Subban was sharp. Starting in place of the grieving Marc-Andre Fleury, who lost his father, this was the best game I’ve seen him play. He took away everything down low and had good rebound control. He finished with 29 saves to earn the game’s number two star.

It’s pretty sad that a guy who still hasn’t proven to be a steady backup in the league outplayed Lundqvist. But that’s exactly what happened. There are no excuses. Even if you’re the biggest Henrik apologist and understand that Vegas is good, this should have been a win. The team played poorly for too long before they finally awakened down four.

In the second period, the fourth line turned over the puck due to a horrible back pass. It was Brett Howden who tried one of those risky passes to the point that Jacob Trouba couldn’t handle. It trapped both him and Skjei to cause a clean breakaway for Brendan Smith’s brother Reilly Smith. He made no mistake by patiently going to a forehand deke and then roofing a backhand top shelf past Lundqvist, who could only lay down after being unable to come up with the save. Had he, maybe it could’ve swung the momentum. It was a excellent move and finish by Smith for a 3-0 lead at 4:44.

It got even worse when Kaapo Kakko hi-sticked Brayden McNabb. Unlike the Ranger power play which fired blanks all night to frustrate fans who went and those like myself who watched on TV, the Golden Knights made it 2-for-2 on a well executed Cody Glass pass for a Max Pacioretty finish on an open side at 6:20. Mark Stone was instrumental in setting the play up. He’s just a good hockey player. He doesn’t possess the skill of Artemiy Panarin, but is very smart.

Trailing by four, the Rangers really began to dictate the terms. They did some good things on the forecheck and generated opportunities. The problem was Subban wasn’t cooperating. He was making key stops and his defense did a sound job in front of him. They got their sticks on loose pucks and were stronger defensively. For a good portion, the guys in blue weren’t creating enough traffic in front. Something Joe Micheletti alluded to. When a goalie is going well, you got to make it more difficult.

The one instance where they did, it resulted in their lone goal on Subban. On a real good sustained forecheck from the make shift trio of Lemieux, Jesper Fast and Mika Zibanejad, they outworked the Knights along the boards. Eventually, Zibanejad came out with it and passed for Trouba, who wisely shot passed for an open Lemieux in front for a great redirection for his fourth goal with 4:45 left to give them hope. Lemieux was their most effective player.

Had they been able to get another goal before the second ended, we could’ve had a different game to recap. Maybe even a comeback like at Montreal. But the Rangers missed on some close calls including Strome passing for Panarin, who couldn’t quite put it away. It was that kind of night.

Vegas tried their darnest to get the Rangers back in the game. They had consecutive power plays on minors from Theodore and Pacioretty. While the man-advantage got a number of good looks, they were unable to convert. It was exasperating. You had Adam Fox miss wide later in the period which left him shaking his head in disbelief. That summed it up.

Zibanejad missed a wide open one in the waning seconds fron the same spot he scored on a Fox pass the other day. There were so many blanks fired that it looked like the gang that can’t shoot straight. They did fire 11 shots through, but Subban was up to the challenge to win his third consecutive decision. You can now make an argument that he’s been the better Subban. Scary thought, eh?

There also was a bit of comedy near the conclusion when McNabb knocked Zibanejad’s stick out while the Rangers had a power play. Strome decided to catch it and toss the stick to Zibanejad. An illegal play which resulted in a throwing the stick minor. At that point, I laughed. Not only was it amusing, but I couldn’t believe Quinn argued the call. He already was out of his mind doing one of those mercy Patrick Roy goalie pulls while trailing by three. I can’t stand that. It’s ridiculous.

Here’s a question for readers to ponder. Would Georgiev have made a difference? I’m not going to make any big conclusion here. I just wonder if perhaps Quinn outsmarted himself by not riding the hot hand. I’m not going to fault Lundqvist for the last three goals. Those were good plays. However, if he could’ve prevented Smith from scoring on the breakaway, that could’ve changed the momentum. Sometimes, you need your goalie to make a big save to spark the club. He didn’t get it done.

The Rangers overall were far too sloppy. Pavel Buchnevich had one of his befuddling games where he holds onto the puck too long and loses it due to being too predictable. He wound up with four giveaways and only 1:28 power play time while logging 14:14. This is why I find him so frustrating. He isn’t this superstar other blogs pretend he is. Until he finds consistency, I view him as talented but a tease.

The next game is Thursday at Columbus. So, who gets it. Oh, that’s right. It’s expected to be Georgiev. Then they’ll go to Lundqvist for the Canadiens on Friday. We’ll see how they respond.