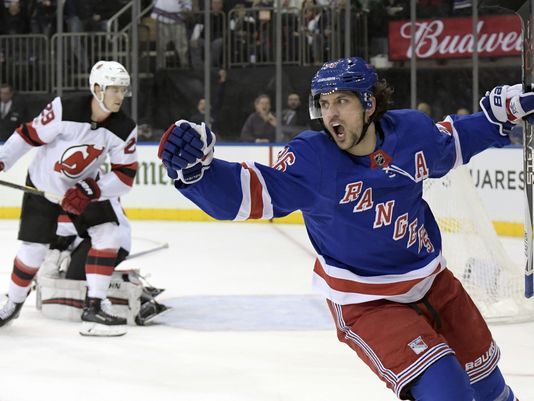 Tonight marks the return of Mats Zuccarello at The Garden. One of the most popular Rangers, who went from a small role under former coach John Tortorella, to a primary one under Alain Vigneault, will be the opponent later.

It’ll still be weird to see Zuccarello in another jersey wearing his familiar Number 36 for the Wild. He was instrumental in helping the ’13-14 team reach the Stanley Cup Final. Playing on a cohesive third line with Derick Brassard and Benoit Pouliot, the pint sized Norwegian brought it. It didn’t matter about his size. He had a gigantic heart and wore his emotions on his sleeves.

He wasn’t only a playmaking right wing who made teammates better. But a hard nosed warrior that could dish it out as well as take it. Zucc as he is affectionately known by MSG and just about everyone including Dallas fans who took to him last Spring, will certainly be saluted by the Rangers during what should be an emotional game. There’ll be a video tribute and the usual acknowledgement from former teammates including close friend Henrik Lundqvist, who’ll start in net. Will they have some battles in the crease?

One thing about Zuccarello. He never shied away from going to the dirty areas to score. Though he was always more of a set up man due to his high IQ and unselfish nature, he’s always carried himself so much bigger in stature than the generous 5-8 he’s listed at. Like most small players, he’s strong and tough. You have to be to make it in the NHL.

If I could use one word to describe Zucc, it would be resilient. Who could ever forget the Ryan McDonagh shot he took off the helmet versus Pittsburgh in the 2015 first round that knocked him out of the playoffs? It’s still amazing that he came back from a brain contusion and hairline fracture that almost ended his career. He had to relearn how to speak thanks to a speech therapist.

Somehow, he came back like nothing happened. In ’15-16, he paced the team in scoring with a career high 26 goals and 61 points. Having done the unthinkable, he was nominated for the Bill Masterton Trophy. He should’ve won it over ageless wonder Jaromir Jagr. But what can you do? It was a bit perplexing that Zuccarello didn’t win the award.

A heart and soul player who led the Rangers in scoring four different seasons including the memorable ’13-14 when they rallied from a 3-1 second round series deficit to beat the Penguin for the first time, he’s someone that’s easy to admire for how hard he plays the game. He became a team leader and was someone who loved being a Blueshirt. When he was finally traded last February 23, it was tough on everybody.

Even after an injury sidelined him most of the rest of the regular season, he came back and nearly led the Stars to a second round upset of eventual Cup champion St. Louis. His 11 points (4-7-11) tied him with Tyler Seguin for the team lead in the postseason.

After not re-upping with Dallas, who I still believe made a mistake, Zuccarello wound up signing with Minnesota for five years and $30 million. He went from making an average cap hit of $4.5 million as one of the better bargains to earning $6 million annually. The raise was well deserved. Even though I’m not sure how he’ll look by the end of that contract, you know he’ll give it his all.

So far, it’s been a rough go for Zucc and the Wild. They’re 9-11-3 this far in a very competitive Central Division. Even though they’ve struggled, Minnesota has played a little better recently. They enter 3-0-2 in the last five with points in five straight. Zuccarello has picked it up lately with four points (1-3-4) in his last three games. Overall, he’s played in 19 games for the Wild and is 4-7-11 with a minus-seven rating so far. Five of his 11 points have come via the power play.

Will he score on Lundqvist after having dinner with his former teammate’s family over the weekend? It wouldn’t surprise me. Zucc is that kind of player you root for and love. But he is the opponent tonight for a younger team that’s still trying to find consistency following a wild rally from a 4-0 deficit to stun Montreal 6-5 on Saturday.

For his Rangers career, Zuccarello had 113 goals with 239 assists for a total of 352 points in 509 games. He also had 215 penalty minutes due to his passion. It’s why he’s so beloved and will receive quite an ovation in half an hour. His best postseason was in the 2014 run when he had five goals and eight helpers for 13 points. That tied him with former teammate Chris Kreider for fifth that Spring.

Without Zucc, Brassard and Pouliot, there’s no comeback against the hated Pens. Ditto for Lundqvist, who was at his absolute best the last three games. Having emotional leader Martin St. Louis was truly inspiring following the tragic loss of his Mom France. It was poetic that he’d score the first goal on Mother’s Day in Game Six when MSG shook literally. I was there. Ditto for Brad Richards, who scored the series clincher in Game Seven from St. Louis. It was storybook. Even if that team ultimately didn’t win a championship due to losing to a better Kings roster that also had the benefit of some calls.

Now, it’ll be Zuccarello versus his old team at The Garden. He’ll probably shed some tears. Who will cry more? Him or Hank? Updating this post, from the great Wild reporter Sarah McLellan:

#NYR fans gathered at #mnwild’s end as Zuccarello takes to the ice for warmups to chants of “Zuuuuuuc.” pic.twitter.com/Cfo6AntgDf

What a cool moment. Clock hits zero to end warmups. Zuccarello chants floating through the building. Zuccarello stays out passing with Hartman. After Hartman leaves the ice, Zuccarello waves to the crowd.

In regards to the Rangers, who enter play 10-9-2 through the quarter mark, Mika Zibanejad will miss his 13th consecutive game. However, he did practice in a white jersey and will do one more tomorrow with him expected back Wednesday on Turkey Eve. He wouldn’t give away what the mysterious upper body injury was. Though we have a pretty good idea by now. Especially given Zibanejad’s concussion history.

As expected, Boo Nieves was recalled to replace the injured Greg McKegg to center the fourth line. If he goes back down, he’ll need to clear waivers. I can’t imagine any team claiming him. Micheal Haley already cleared and stayed up with the team even playing if you can call less than three minutes of ice time that. Yikes.

David Quinn has decided to give Brady Skjei and Jacob Trouba another chance as the top pair. Even though both defensemen struggled at times on goals against the other night, he liked the way they responded. Skjei did record two assists including a important one on Brendan Lemieux’s tying shorthanded goal. Trouba got the winner off a Ryan Strome face-off win through a good Kreider screen. We’ll see how it goes.

I am not a fan of the Libor Hajek and Tony DeAngelo pair. But that’s what it is for now. Ryan Lindgren and Adam Fox have been the most consistent since being put together. They’re basically the second pair. I guess we’ll find out how long the renewed Skjei-Trouba partnership lasts.

That’s gonna do it for now. I’ll have a game review later. It should be interesting.