Lias Andersson (with Brendan Lemieux above) has been handled poorly by the Rangers organization. AP Photo via Getty Images

Imagine having the foresight to see ahead and plan for the future. This is exactly what the Rangers did in the summer of 2017 when they traded Derek Stepan before his no move clause kicked in. General Manager Jeff Gorton packaged Antti Raanta with Stepan to the Coyotes in exchange for Arizona’s first round pick that became Lias Andersson at number seven and defenseman Tony DeAngelo.

That deal was consummated on June 23, 2017. At the time, it was a move that made sense. Following a disappointing second round series loss to Ottawa, it looked like the end of the window for that core to win under coach Alain Vigneault. It was an admission that the time had come and gone for a cohesive group that gave Garden Faithful some great moments.

Stepan was a big part of that. He centered one of the top two lines on the ’13-14 team that reached the Stanley Cup, and gave us a signature moment in a dramatic second round comeback from 3-1 down to stun the Caps.

Since we are in November, it feels somewhat appropriate for this Guns N’Roses line from one of my favorite songs, “November Rain.”

And we both know hearts can change

And it’s hard to hold a candle

In the cold November rain

Meanwhile, Brassard has been well traveled since his Big Game Brass days on Broadway. He’s now with the Islanders after going from the Senators to Pens to Panthers to Avalanche in very nomadic fashion. Zuccarello went from a rental with the Stars to signing with the Wild. Boyle has been all over the map since he set up Moore for the clinching goal that sent the Rangers to their first Cup Final in 20 years. He played for the Lightning, Maple Leafs, Devils where he became an inspiring story after overcoming Leukemia. Then the Predators and now the Panthers, who he scored his third goal for during Sunday’s 6-5 shootout win over the current Rangers. Yandle is a teammate. McDonagh is a key defenseman on the Lightning. Also a former captain.

To say things have changed would be understating it for the current Blueshirts under second-year coach David Quinn. In rebuild mode during Year Two, they’ve been up and down thus far literally. As the 7-6-2 record indicates, they’re the definition of mediocre. Not to diminish the early positive returns from Artemiy Panarin. It’s a work in progress.

There have been some bright spots over the first 15 games. We’ve seen the improvement of DeAngelo, whose ability to jump into the play and contribute has him ranked ninth among defensemen in scoring with 13 points (5-8-13). A net positive for the 24-year old who came on last season following a number of healthy scratches. He’s now established himself as a trustworthy top four defenseman, who can play the power play. Defense is still an area he must improve on.

He’s far from alone there. Featuring a few first-year players including Adam Fox, Libor Hajek and Ryan Lindgren on the back end, the Rangers are very young. The offense is coming for Fox, who Gorton wisely acquired the rights to from Carolina for a couple of draft picks. He’s got points in four straight entering tomorrow night’s home match against the Sidney Crosby less Penguins. Of the younger kids, Fox and Lindgren are the steadiest defensemen in their end. Lindgren just recorded his first NHL goal on Sunday. Hajek (2 assists) still is a little inconsistent despite the skating and skill he brings.

The positive side is Quinn is willing to give these guys some rope. That way they can learn from their mistakes. If only that applied to everyone. While we’ve seen 2019 second overall pick Kaapo Kakko start to find his footing with his fourth goal in the 6-5 shootout loss to the Panthers, there’s been nothing for Andersson. The 21-year old center the organization selected as part of the Stepan trade, remains stuck on the fourth line. He hardly plays enough under Quinn, who seems to prefer sophomore pivot Brett Howden. He centers the third line and is way more trusted by the coaching staff.

Nothing against Howden, who had a decent rookie season last year with 23 points (6-17-23) in 66 contests. But what is he? A good skater with a high IQ that allows him to kill penalties, the 21-year old from Calgary receives an average ice time of 15:45 per game. Over that span, he’s even gotten an opportunity to center the second line. A failed experiment that didn’t last long. So far, he has two goals and two assists in 15 games. They’ve treated him fairly.

They haven’t done right by Andersson, who was left answering more questions following yesterday’s match in which he didn’t even receive eight minutes. Quinn said it was just the flow of the game. Kind of a cop out. He’s used that same line before when Andersson doesn’t play enough. It’s a poor excuse. Why does he average 9:54 a night with about two minutes coming on the penalty kill?

What is the plan for Andersson? Is there one? Or is he stuck in a bad numbers game where the organization favors Howden due to trying to justify a trade with the Lightning? You know. The one that sent not only former captain Ryan McDonagh to Tampa, but JT Miller as well. Even if he was redirected to Vancouver, Miller seems to be doing real well in his new home.

The full trade was McDonagh and Miller in exchange for Howden, Hajek, now ex-Ranger Vladislav Namestnikov (Nick Ebert and 2021 4th Rd Pick), 2018 first round pick Nils Lundkvist along with conditional second pick Karl Henriksson, who looks like a steal. Overall, it could turn out to be a good trade in favor of the Blueshirts. Especially if Hajek improves and Howden. But it hinges on prospects Lundkvist and Henriksson. They could have a higher upside.

It’ll be interesting to see how things develop over time. When it comes to rebuilding, patience is required. Here’s the rub. In 81 NHL games, Howden has totaled eight goals and 19 assists for 27 points. That’s almost a full season. He hasn’t improved yet. Not if you’re basing it off what we’ve seen. He certainly works hard enough. But it comes down to production. He is getting every chance by the organization. Notice I didn’t say Quinn. I believe it’s the organization that wants Howden to succeed.

I want every young Ranger to. But not at the expense of Andersson, who they thought was worth taking seventh overall over two years ago. They liked him better than Casey Mittlestadt, who has more of a defined role on the Sabres. Martin Necas, Nick Suzuki and Robert Thomas were all available. Those are players with more skill than Andersson, whose tenacity and leadership qualities the Rangers liked. It’s not like he didn’t have a good World Junior Championship. Or did they forget his six goal, seven point performance to lead Sweden to silver. The medal he chucked over the glass in frustration.

Of course, the Rangers also selected Filip Chytil at number 21 of the same round. A player with a higher ceiling due to his unique combination of skating and uncanny ability to finish. The goal he scored on Sunday where he went around one player and snapped a perfect wrist shot gave him four goals in six games since his recall from Hartford.

While Chytil has looked like a different player after not making the roster out of camp, Andersson can’t escape jail. He remains centering the fourth line which now consists of Greg McKegg and plugger Brendan Smith, who’s been better than expected in a dual role where he doubles as a penalty killing defenseman. Yet people complain about that.

The same way they’re celebrating the demise of Don Cherry, who made an off color remark about wearing a poppy that was misconstrued due to how poorly he worded it in support of Veterans. How ironic that he’d lose his job on Remembrance Day. This is how intolerant society is becoming. I doubt he cares. He’s said far worse and is an 85-year old man, whose dedication to the sport and great Canadian servicemen will continue without hypocrite Ron MacLean and the hideous Sportsnet that caved in to the public outcry.

They should’ve just done it amicably a couple of years ago without it turning into a circus like the basketball team that plays at MSG. That’s my only take on the controversial matter. Things can always be handled better. They just aren’t anymore due to the overly sensitive PC culture on social media. I might be spending less time there.

Regarding Andersson, something has to give. Either they start playing him with better players on at least the third line, or shop him. This disturbing trend can’t continue. He’s being treated with kid gloves. It’s as if he’s never played hockey before. Something he’s done most of his life. This is why I don’t fully trust the Ranger organization when it comes to development. They don’t know what they’re doing. They’ve not only hurt Andersson’s confidence, but his trade value. 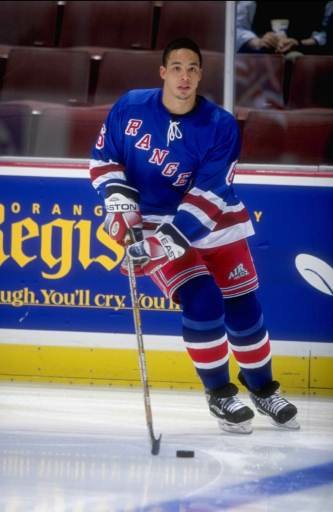 Manny Malhotra was handled similarly by a dysfunctional Rangers organization once before becoming a solid NHL player elsewhere. AP Photo via Getty Images

It reminds me of what the awful management did to another high first round pick in Manny Malhotra. He was treated similarly. Even after winning a Calder Cup with Hartford. I bet he couldn’t wait to escape that toxic environment. Even if it took until Dallas moved him to Columbus to get settled into a checking center role where he became a reliable face-off guy and penalty killer, Malhotra turned into a well respected NHL player who went on to a successful career.

History seems to be repeating itself. It really shouldn’t. This is a Rebuild. Andersson deserved to center the third line over Howden based on preseason. Instead, he’s persona non grata. Either play him and see if he can perform or free him from this chaotic madness.