Game #13: A welcome sight for Lundqvist against lowly Red Wings 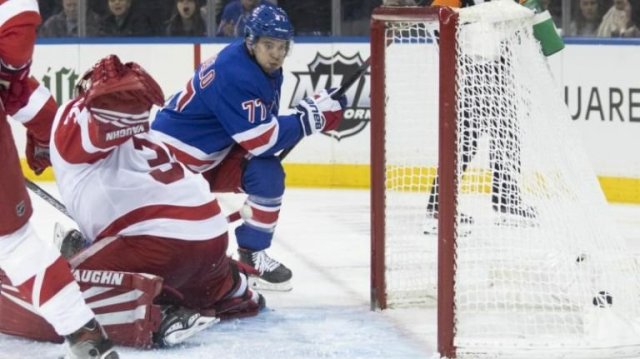 It’s hard to know what to expect. Following Monday’s disaster to Ottawa, you had to figure there would be a better effort. Sure enough, the Rangers delivered on that promise by methodically beating the lowly Red Wings 5-1 last night at MSG on Wednesday Night hockey.

After the game, NBCSN wisely aired the movie, The Russian Five covering the special connection the five Russian hockey players had while eventually starring for the Red Wings to help win consecutive Stanley Cups in ’96-97 and ’97-98. I enjoyed every minute of it. Highly recommended to any passionate hockey fan.

As for the game, there really isn’t a lot to say. The Rangers did what they had to do against a team that’s in worse shape than them. Detroit might boast a good first line featuring captain Dylan Larkin, Anthony Mantha and Tyler Bertuzzi. However, they are so incomplete, it’s sad. Having to trot out fallen veteran Jimmy Howard in net with Jonathan Bernier as the other goalie is hard for coach Jeff Blashill. They are a long way from competing. Even with promising defenseman Filip Hronek and Andreas Athanasiou, there really isn’t much. Yzerman has his work cut out.

This isn’t like that feel good win on my birthday when Pat Verbeek beat Detroit in overtime on a power play goal. That feels like a lifetime ago. So did all the classic matchups between Howard and Henrik Lundqvist. Normally, they go toe to toe like two heavyweights. The game goes to overtime or a shootout with the final score 2-1. Not on Wednesday. Howard entered with a career record of 10-3-3 vs the Blueshirts with a 1.77 GAA and .948 save percentage. But he’s not that goalie this year.

It showed. There were a couple of leaks. Following a scoreless first period that put some fans and even a couple of whiny beat writers to sleep, the Rangers got a early power play in the second. Pavel Buchnevich passed down low for Brendan Lemieux, who did the grunt work to set up Tony DeAngelo for his fifth at 4:25. Tony Dee continues to impress. The five goals are one more than he had all of last season. He is continuing to silence the doubters.

Less than a couple of minutes later, DeAngelo stepped up in the neutral zone to create a two-on-one. Buchnevich took the puck and waited before passing across for Chris Kreider, who this time was able to beat Howard from a bad angle for his third at 6:04. He didn’t exactly fire the shot quickly. Howard has enough time to make the save, but just couldn’t. It was a soft goal and good luck for Kreider, who was appreciative of the pass from Buchnevich (2 🍎) and credited Lundqvist for a strong game.

Kreids: “It was a good response. We took what we did for 11 minutes at the start of the game the other night and were able to do it a little longer.” pic.twitter.com/DHOfHnWFO8

Another Red Wing penalty led to a second Blueshirts power play goal. This time, Adam Fox took an Artemiy Panarin pass at the left point and fired a wide wrist shot that had the good fortune of going off Ryan Strome’s shoulder and in for a 3-0 lead. That’s how it goes for Strome, who can do no wrong. He continues to play well while centering the top line with Panarin and Jesper Fast. He had two more points in the win. This isn’t a fluke. He’s putting himself in position to succeed. They oughta consider re-signing him. He adds that key ingredient most of the roster lacks.

Leading by three and totally in control, a brutal mistake allowed the Red Wings to get some life. A bad pinch from Libor Hajek resulted in Detroit coming out of their zone with a two-on-one. It’s what happened next that was even worse. Jacob Trouba barely touched Athanasiou, who went by like he was a ghost to dish across to Valtteri Filppula for an easy put away to again keep Lundqvist without a shutout. Here’s how it looked and sounded as called by Doc Emrick.

Mantha made the play to trap Hajek and Filppula and Athanasiou worked a give and go. I cannot believe how soft Trouba was. He made no attempt to check him. It was dizzying. It was very disappointing. At least it was only one bad moment. He’s better than this. He’s been outperformed by Neal Pionk. A guy that was ran out of the building because he was being used in a crazy role. I’d still do the trade 100 out of 100 times. Trouba needs to perform up to expectation. He isn’t cheap. I’m not going to mention the salary.

For a while following that goal in Filppula’s 500th game as a Red Wing, they had most of the play. It was Detroit with the puck possession putting the Rangers on the defensive. Lucky for them, Lundqvist was good. He came up with some big saves to keep the lead at two. All 12 saves he made in the period were important.

Cheers to your first as a Ranger, Kegger. pic.twitter.com/Jjv9vnOEI3

The Wings hung around in the third for a bit. A bad tripping penalty by Micheal Haley gave them a power play. However, it was the Blueshirts who made the most of it. A Howard misplay allowed Greg McKegg to score a shorthanded goal from Brett Howden and Trouba at 8:44. It was his first as a Ranger. Inserted into the lineup for Lias Andersson, he shouldn’t come out when the team visits Raleigh to face his former team tonight. I would scratch Haley. Andersson needs to play. Enough of these head games.

It was also the return for Dylan McIlrath. The former first round pick was called up by the Red Wings from Grand Rapids to replace injured vet Trevor Daley. He was okay in 13 minutes. However, McIlrath was caught on for a power play goal and one at even strength. He’s a good team guy. It’s too bad he never reached his full potential. Injuries played a role for sure. So too did the ridiculous treatment he got from Alain Vigneault. But he won a Calder Cup in Grand Rapids and seems happy. That’s cool.

As usually happens in a 4-1 game, the Rangers sat back. They allowed Lundqvist to take care of the rest. He stopped all 16 Detroit shots in the final period to net the game’s first star. We’ll probably see him again against Carolina. That should be a much better game. The Hurricanes are coming off a disappointing loss to the Devils.

We’ll see what that brings.

BREAD WITH THE EMPTY NETTER pic.twitter.com/uCx1IqSrFo

The keeper of the hat. pic.twitter.com/6R7Boduj7b