As we finally approach the end of a long August that feels like an eternity, September means hockey is around the corner. After a whole lot of nothing aside from unsigned players and organizations posturing due to the dysfunctional salary cap system, we can now set our sights on the upcoming month that will include Rookie Prospect Tournaments, training camp, preseason and final rosters.

So while other teams and their pricey Group II free agents scramble to get deals done, the primary focus in the metropolitan area is one of great anticipation and excitement. The Devils will feature top pick Jack Hughes while the Hudson rival Rangers will star second pick Kaapo Kakko.

It truly is a new chapter in the Hudson Rivalry. Two franchise players who can change the dynamic for both franchises by making them relevant again. It might not happen right away. Even with the Newark and Manhattan side adding key pieces to their brand new toys, the playoffs are far from a certainty.

Believe me, P.K. Subban adds a lot of pizzazz to what’s been a bland rivalry since Martin Brodeur left New Jersey. There hasn’t been this kind of buzz since Marty battled Henrik Lundqvist in the 2012 Eastern Conference Final. One I’d rather forget. For Hasan, it was a moment the Devils and Brodeur had waited for. Even if it didn’t result in the ultimate prize, they got revenge thanks to Adam Henrique. Ironically, Doc Emrick had the call.

Even though Lundqvist won the Vezina and would later guide the Rangers to their first Stanley Cup appearance in 20 years, it didn’t have a happy ending. They suffered a similar fate to the hated Kings that the Devils did. I think ours was more cruel due to the blown leads and overtime futility at the obnoxious Staples Center. Has there ever been a more annoying arena? I don’t need to hear Cartman scream, “Go Kings Go,” a zillion times.

Fast forward five years later and 2014 feels like a lifetime ago. What’s fitting is the Kings stink and are stuck with an aging Ilya Kovalchuk. That has to bring a smile to Hasan’s face. While our teams have the next generation’s stars ready to unleash a new installment between The Rock and MSG a Path Train ride away, Los Angeles will likely be one of the NHL’s worst teams. It couldn’t happen to a nicer franchise.

So, as we move forward to what’s in store this year, let the great debate begin. As I proposed on our new Twitter account, who would you rather have to build around? If you haven’t already, please give us a follow @BattleofHudson and cast your vote. Not that I expect any objective opinions on the two young kids.

Who do you want if you could build one of the two Hudson rivals?

How successful will each be in their rookie season? I feel it largely depends on how quickly both Hughes and Kakko adjust to the best hockey league in the world. It also could hinge on who they play with. Here are a couple of hypotheticals.

If Hughes is the number one center for New Jersey, does he play with Taylor Hall and Kyle Palmieri, or will he slot in on a second line behind Nico Hischier with Nikita Gusev and Wayne Simmonds/Jesper Bratt?

Assuming Mika Zibanejad is the top center, does Kakko find himself on the right wing with Artemi Panarin on the left side, or will he start on the second line with Chris Kreider and Filip Chytil/Ryan Strome?

These are some interesting questions. What about the size difference? Kakko is approximately 6-2, 180 while Hughes is 5-10, 170. How much weight did they put on? Does Kakko’s physical strength make him more NHL ready? Or does that really matter in today’s speed oriented game geared towards creative players like Hughes? 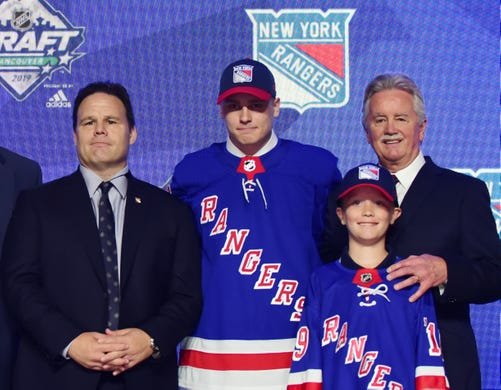 It’s sure to be a healthy debate for years. With both on opposite sides of the spectrum in a heightened rivalry, they’ll be compared. It’s what fans and media do. Even if it is unfair, that’s what happens when two players of this magnitude go 1-2 and get thrown into the fire literally.

Don’t forget they’re teenagers. It might not come right away. Both teams had good offseasons to improve their chances in a very competitive Metropolitan Division. The Capitals, Islanders, Penguins, Hurricanes and Blue Jackets all made the playoffs last season. Only Columbus could suffer a serious drop off due to key departures. The other four teams should all be good. Factor in the expected improvement of the Flyers and it’s a tough division to call.

How much will Subban and Wayne Simmonds add to the Devils? Is Gusev another Panarin? Only time shall tell.

What about Jacob Trouba? How much impact can he have on the Rangers defensively? How good is Adam Fox and what about Vitali Kravtsov? If you go down the line and include Chytil, Brett Howden, Lias Andersson and Libor Hajek, the Blueshirts are the younger roster with more question marks.

Both clubs have similar questions in goal. For now, each should go with proven veterans. On Broadway, that’s Lundqvist. In Newark, it’s Cory Schneider, who might have to fend off a serious challenge from Mackenzie Blackwood. Lundqvist can be managed due to Alexandar Georgiev. But Georgiev must perform adequately or perhaps Igor Shesterkin plays himself into the conversation. However, it’s unrealistic to expect a guy who flourished for one of the KHL’s best teams in St. Petersburg SKA to jump right in when the situation is very different along with the game.

If you could select one player, who would it be and why? Is it the American in Hughes with the boyish looks and charm that looks like a home run as a franchise center? Or is it the power forward in the Finnish Kakko, who can dominate shifts by playing a similar style to one of the game’s greats in Jaromir Jagr?