Panarin chooses the Rangers over Islanders 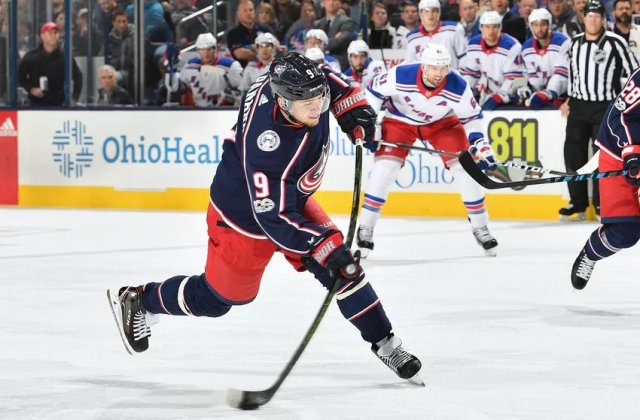 Twelve hours ago, it was looking pretty bleak for the Rangers in their pursuit of Artemi Panarin. The bitter rival Islanders had the inside track to landing the high scoring Russian forward by offering more money. Even the Blue Jackets made a last ditch effort to keep Panarin by going to $13 million for an eight year max before midnight.

In the end, the 27-year old Panarin decided he wanted Manhattan over Brooklyn or Long Island. Perhaps he used the oldest trick in the book. Panarin played the field against each other. He used both the Panthers and Islanders for leverage to squeeze a little more out of the Rangers.

That’s the name of the game. When it comes to unrestricted free agency, it’s in the player’s hands. They dictate what happens. Especially when you have as many interested suitors.

There’s no question Panarin is a legit first line talent who makes teammates around him better. That’s what the Rangers are banking on. Is it worth the risk over the long-term? We’re about to find out. It’s now official.

The term is $11.6 million AAV over seven years. So, he left money on the table to sign with the Rangers. It’s where he wanted to be. It’s seven years worth $81.5 million.

In four years with the Blackhawks and Blue Jackets, Panarin has totaled 320 points over 322 career games. More a playmaker than a finisher, the Bread Man has scored 116 goals while handing out 204 assists. A superb skater with excellent vision, he should be a big power play weapon.

A strong puck possession player, it’s no surprise that he’s averaged a 54.5 Corsi over his first four NHL seasons. It’s also not shocking how he’s been used. Panarin is a above average offensive player, but not the best defensively. So, it stands to reason that he’s averaged a ridiculous 74.0 percent for offensive zone starts compared to only 26.0 in the defensive zone. That shouldn’t change on Broadway.

What kind of impact will an elite first line forward have on his new Ranger teammates? Coming off a career high 87 points in which he posted 28 goals and 59 assists with Columbus, he’s in the prime of his career. What’s even better is he’s only completed four long NHL season, which means he should have more peak years left.

By comparison, Chris Kreider has played over six seasons and totaled 460 games along with 77 postseason games. With the Panarin addition, it could spell the end of an era for the Blueshirts. Kreider is the last big name forward left over from the big runs in 2012, ’14 and ’15. The original ’09 first round pick stolen at number 19 has been a true warrior for this team.

Maybe the big, strong power forward with tremendous speed and skill hasn’t hit the projected numbers I believe he could. The 30-goal mark and 70 points. However, a strong possession player who sacrifices so much by doing the grunt work in front of the net, will be missed.

If this really is it, the 28-year old Kreider was a popular Ranger who gave fans some great moments. A year away from unrestricted status, it looks like he could be dealt to clear room. He has a year left at a bargain price of $4.625 million. The next contract he signs will come out between $6.5 to 7.25 million on average. It’s fair market value for the two-time 28-goal scorer who’s eclipsed 50 points twice.

I wish they could keep him. But there’s no way they’re going to put themselves in another Kevin Hayes or Mats Zuccarello situation. It doesn’t make sense. If he goes, No. 20 will be missed. He was one of those core players during the fun era started by John Tortorella and ended by Alain Vigneault, who flourished alongside American buddy and linemate Derek Stepan. Their chemistry was undeniable. I wonder if the Coyotes would consider a reunion. They just added Phil Kessel. So, it’s unlikely. Colorado could be a good fit for Kreider, who could supply the secondary scoring on a Cup contender. The Rangers almost traded him at the NHL Draft last week for the Avalanche’s first round pick. Instead, they took Alex Newhook at number 16.

While we wait and see what the next move is from GM Jeff Gorton and Team President John Davidson, it’s an exciting time for Ranger fans. They got their guy and didn’t cave in. It’s still overpayment for a very good player, whose playoffs helped. He had five goals and six helpers in two rounds for Columbus.

How does a top line of Panarin-Mika Zibanejad-Kaapo Kakko strike you? It probably won’t happen right away due to key RFA Pavel Buchnevich, who has formed solid chemistry with Zibanejad. But eventually, Kakko should be on the top line with Buchnevich sliding down to a second line with potentially Vitali Kravtsov and Filip Chytil.

There’s still the issue of who is their second center behind Zibanejad. Chytil is more effective on the wing. Kravtsov is brand new. Lias Andersson has to prove he belongs in the top nine with competition coming from Brett Howden. Ryan Strome can shift to center if needed. But I prefer him on the right side.

The bottom line is the Rangers just got a lot more interesting. There will be plenty of excitement surrounding them this Autumn. For now, we have to see what else they have planned. They still must pay defenseman Jacob Trouba a lot of money. Combined with Panarin, that’s an estimated 19 million. They will still have room for Buchnevich, Tony DeAngelo and Brendan Lemieux. A key players who could help replace what Kreider brought. Though he doesn’t possess the high end skill, Lemieux plays the game with a physical edge that fans love. It’s up to him to improve his skating.

While this is a great day for the Rangers, it’s gotta be a somber one for the Islanders, who struck out on both Panarin and Sergei Bobrovsky, who inked a seven year deal worth $70 million with the Panthers. What happens if Anders Lee decides to leave to the rumored Canadiens after being second fiddle? The same for Robin Lehner.

You have to laugh. Wayne Simmonds signed for a year, $5 million with the Devils. A good move by New Jersey. We’ll have more on the craziness of the frenzy later.