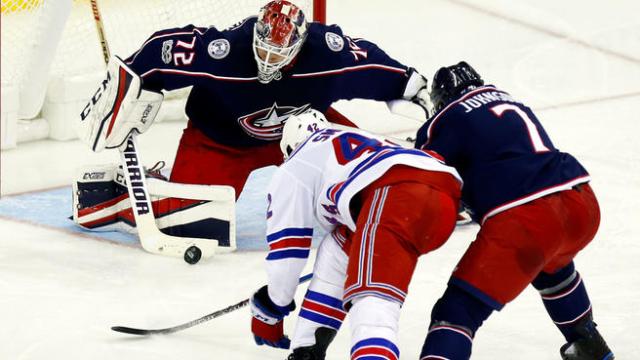 Sergei Bobrovsky signed on the dotted line with the Panthers as expected.

Day 1 is in the books. Not the books legendary Mets radio play by play man Howie Rose refers to when the Mets actually win a ballgame. But the Free Agent Frenzy had plenty of action and even some shockers.

The biggest fish was Artemi Panarin, who chose the Rangers over the Islanders for less money. Not that it makes a difference. The Bread Man got paid. That makes the Blueshirts big winners on July 1. Now comes the big pressure of delivering in the Big Apple. He’s got the next seven years to get it done.

As far as the Islanders, I have no idea what they’re thinking. I can understand chasing after Russian tandem Panarin and Sergei Bobrovsky, who wound up where everyone predicted. The two-time Vezina winner is the newest Panthers starting goalie, scoring a cool $10 million average over the next seven years. He is joined by Noel Acciari, Brett Connolly and Anton Stralman on a Florida team intent on returning to the playoffs under coach Joel Quenneville.

The Isles fascination could’ve cost them another captain. But thankfully, Anders Lee remained loyal by patiently waiting before signing a brand new seven-year contract worth a fair AAV of $7 million. That’s exactly what he deserved due to the market. It increased due to teammate Brock Nelson and Kevin Hayes getting paid last month. So, Lee stays with the only organization he knows.

The puzzling aspect is why the Islanders were so cold to heroic number one goalie Robin Lehner. By only offering the Masterton Trophy winners two years at $5 million per, they totally disrespected the Vezina finalist. It’s no wonder he said, ‘Thanks, but no thanks.’ Instead, he oddly agreed to a one year deal worth the same $5 million with the Blackhawks. The same team that also has Corey Crawford. Wow. Nobody saw that coming.

Bob McKenzie had reported that the Isles were fascinated with Semyon Varlamov. Why? I have no clue. When healthy, he’s capable of being a good number one goalie. However, that’s a big if. So, why did GM Lou Lamoriello sign Varlamov to a four-year deal worth $5 million AAV. Why would they sign him for that length? It’s astonishing. They have Thomas Greiss for another year while top Russian goalie prospect Ilya Sorokin has another year to go with CSKA Moscow in the KHL. Linus Soderstrom has spent the last two seasons with HV71 Jonkoping of the Swedish Elite League.

The Devils made a sensible move by reaching agreement with veteran power forward Wayne Simmonds for one year, $5 million. If he can get back to being totally healthy, that seems like a good gamble by GM Ray Shero. Simmonds has something to prove. He plays the game the way it’s meant to be played by getting his jersey dirty and scoring garbage goals on the power play. He stands up for teammates and is tough. That’s the kind of guy I wouldn’t have minded in a Blueshirt. Oh well. I guess he’ll torment us like usual.

The biggest fireworks were delivered by the Canadiens in the form of a rare offer sheet. They signed restricted free agent Sebastian Aho to a front loaded five-year contract worth a reported $42.3 million. It averages out to $8.454 million.

The Canadiens have announced that they have tendered an offer sheet to restricted free agent Sebastian Aho of the Carolina Hurricanes. The proposed contract is for five years, with an average annual value of $8.454 million.#GoHabsGo

Will we match the offer sheet for Sebastian Aho?

There’s the question of whether the 21-year old Carolina Hurricanes center who put up over a point-per-game going 30-53-83 in 82 games, really wants to play in Montreal. He is a bright young star that’ll only get better. It’s no wonder the Hurricanes had a little fun on Twitter with that poll above. As if they won’t match. They have seven days.

Offer sheets are frowned upon. However, there’s nothing in the rulebook that says you can’t do it. I thought the Rangers should have considered it with Lightning Group II free agent center Brayden Point. Some wondered if Mitch Marner might get tendered an offer sheet. He wants the moon. Why not? He put up 94 points.

The Maple Leafs were very aggressive today by swinging a pair of cost cutting deals that should help them keep Marner. First, they traded defenseman Nikita Zaitsev, Connor Brown and Michael Carcone to the Senators for Cody Ceci, Ben Harpur, Aaron Luchuk and a 2020 third round pick.

Toronto then made a wise move to shore up the blueline by acquiring offensive right defenseman Tyson Barrie, RFA forward Alexander Kerfoot and a 2020 sixth round pick from the Avalanche for center Nazem Kadri, Calle Rosen and a 2020 third. While most think the Leafs fleeced the Avs, Kadri is that perfect tenacious two-way center Colorado lacks. He’s on a cap friendly deal ($4.5 million AAV) thru 2022. Barrie is entering his final year and became expendable due to the surplus of good D the Avalanche have. Cale Makar is at the top of the list of Calder candidates. It’ll be interesting to follow the path of both teams next season.

Vancouver inked a trio of defensemen. Former Winnipeg Jet Tyler Myers agreed to a five-year contract worth an AAV of $6 million. They also added Jordie Benn for two years and $4 million. Oscar Fantenberg was signed for a year at $850,000. The Canucks made sure to lock up proven veteran leader Alex Edler for two years at an AAV of $6 million through 2021. With Quinn Hughes ready to patrol the back end, Vancouver could improve. Aside from Calder winner Elias Pettersson, Brock Boeser, Bo Horvat and newest Canuck JT Miller, they have a good system.

The Stars got veteran Corey Perry for a year at $1.5 million. If he can provide a spark like he once did as a star for the Ducks, that’s low risk. Adding both Perry and Joe Pavelski to a nucleus of Tyler Seguin, Jamie Benn, Alex Radulov, Roope Hintz, John Klingberg, Miro Heiskanen and Esa Lindell solidifies them. Especially if Vezina runner-up Ben Bishop can stay healthy.

I like the Joonas Donskoi signing by Colorado too. They gave him nearly $4 million on average for over four years. So, they certainly overpaid. But Donskoi is the kind of high character player that can make a difference on a Cup contender. Those are the types you need to win.

The Sharks didn’t wait on restricted free agent forward Timo Meier. They signed him for four years at an AAV of $6 million. He’ll only improve. I thought the Capitals made two under the radar moves by adding depth forwards Richard Panik (4 for $11 million) and Garnet Hathaway (4 years, $6 million). Solid additions.

Then, you have the Pens continuing to do crazy moves that define logic. Brandon Tanev is a solid checking center. But why the heck did they go six years for the former Jet? It’s a bit mystifying. He gets $3.5 million AAV to provide for Pittsburgh what he did for Winnipeg. After unloading Phil Kessel for Alex Galchenyuk, they sure have changed the look of their roster. Is it better? I don’t think so.

After striking out on Panarin, the Blue Jackets gave Gustav Nyquist four years at an AAV of $5.5 million. While he’s a solid secondary scorer, consistency has been an issue which is why the Red Wings gave up on him. We’ll see if a change of scenery can spark Nyquist the way it did Tomas Tatar.

Former Islander Valtteri Filppula decided to go back to Detroit for a multi-year deal worth a bargain price of $6 million. He was a valuable asset to the Isles who could be missed. He scored some big goals in helping them reach the second round.

I don’t quite get why Florida went three years on Stralman. He’s been hurt more often the past couple of seasons with Tampa. Three for $16.5 million seems one too many years. I certainly respect Stralman for the player he is. He knows how to play the position. That should help a suspect blueline.

Carolina was wise enough to bring back Petr Mrazek on a reasonable two year contract worth an average of $3.125 million.

Mike Smith traded in his Calgary jersey for an Edmonton one. I guess he likes Alberta. Had Cam Talbot not been dealt from the Oilers to the Flyers, it basically would’ve been like a trade between blood rivals. It’ll be interesting to follow.

With the day winding down, I’m sure the activity will slow down with Independence Day on Thursday. I’ll keep you posted on any big news.