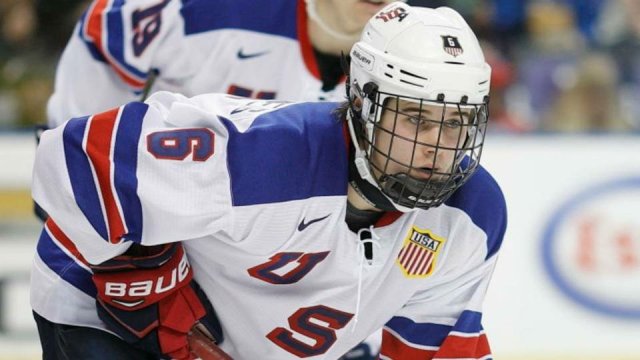 It was quarterfinal day at the World Championships in Slovakia. Two of the four games went to overtime. Three were decided by a goal.

That included Team USA against Russia. A game won by the more skilled Russians, 4-3. It’s not surprising that they lost the quarter.

Gusev had a goal and two assists while Kaprizov notched a goal in the win. Mikhail Sergachev also went 1-2-3. Mikhail Grigorenko tallied.

In a losing effort, Jack Hughes had his best game of the tournament. He picked up two assists, finishing plus-2 with two shots and a takeaway in 12:52 of ice-time. He set up Noah Hanifin for one American goal. Ranger defenseman Brady Skjei had the other goal for Team USA.

The projected top pick also was involved in leading USA sniper Alex DeBrincat’s seventh that cut the deficit to 4-3 with 2:50 left in regulation. He fed Patrick Kane, who threaded the needle across for a perfect DeBrincat one-timer past Vasilevskiy to give the Americans a chance late. Hughes was in the right place looking for a deflection on the goal. For his effort, he was awarded with Player of the Game.

Playing his best game of the tournament, top NHL prospect Jack Hughes is named Player of the Game for USA.

Team USA was unable to tie the game in the closing moments, allowing Russia to hold on. They advanced to the semifinals where they’ll meet Finland. They were 5-4 overtime winners over rival Sweden in come from behind fashion.

The other semifinal will feature Canada against Czech Republic. It almost didn’t happen. The Canadians needed a last second tying goal from Damon Severson to force overtime against pesky Switzerland. After having his first shot blocked, the Devil defenseman had the puck come right back to him for a shot that trickled past Swiss netminder Leonardo Genoni with only 0.4 seconds remaining.

In the new three-on-three format that lasts 10 minutes, Mark Stone won it when he tipped in a brilliant Pierre-Luc Dubois pass into an open net to convert a two-on-one. That gave Canada a thrilling 3-2 comeback victory over a heartbroken Switzerland. They’ll next face the Czech Republic, who ousted Germany 5-1.

Most encouraging is how Hughes performed against tough competition. He received lots of praise for how he played in an elimination game.

Jack Hughes was a big part of USA's toughest game of the tournament. He looked like a pro today with his reads and his effort. He was hard on pucks, getting his stick under guys and made confident plays. Two assists against the best team in the tournament by a mile.

The knock on the smaller Hughes is that he could be pushed around. That wasn’t the case today. He was very good and definitely helped himself. It’ll be interesting to see what the Devils decide next month. They can fill the center slot with Hughes or go with size and strength in Kaapo Kakko.

Whoever they choose will give the Hudson rival Rangers a good consolation prize. See you at the Draft.

Derek Felix is sports blogger whose previous experience included separate stints at ESPN as a stat researcher for NHL and WNBA telecasts. The Staten Island native also interned for or hockey historian Stan Fischler and worked behind the scenes for MSG as a production assistant on New Jersey Devil telecasts. An avid New York sports fan who enjoys covering events, writing, concerts, movies and the outdoors, Derek has covered consecutive Staten Island Yankees NY Penn League championships in '05 and '06. He also scored Berkeley Carroll high school basketball games from '06-14 and provided an outlet for the Park Slope school's student athletes. Hitting Back gives them the publicity they deserve. In his free time, he also attends Ranger games and is a loyal St. John's alum with a sports management degree. The Battle Of Hudson administrator and chief editor can be followed below on Twitter and Facebook.
View all posts by Derek Felix →
This entry was posted in Prospect Watch and tagged Alex DeBrincat, Brady Skjei, Canada, Damon Severson, Devils, Jack Hughes, Kaapo Kakko, Mark Stone, Noah Hanifin, Patrick Kane, Rangers, Russia, Switzerland, Team USA, World Championships. Bookmark the permalink.