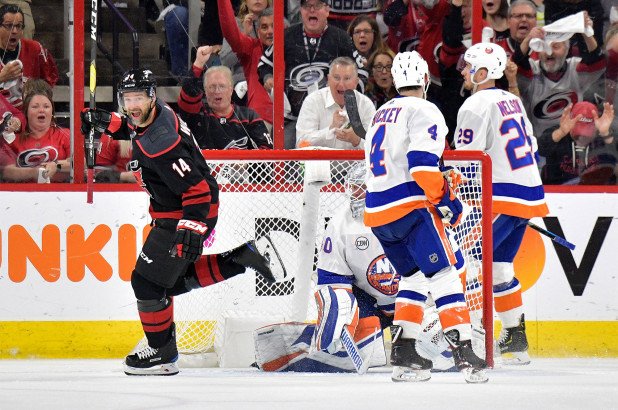 Tonight, the Eastern Conference Final begins. It features the Bruins and Hurricanes. They’re the two survivors left standing from a tremendous NHL Playoffs.

While quite a few predicted the Bruins to reach this point if the Lightning failed, nobody had the Hurricanes playing for a chance to reach the Stanley Cup Final. They got here by coming back to beat the Capitals in seven and sweeping the Islanders.

Boston had to dig deep by beating Toronto the final two games and then taking the last three from Columbus to prevail in six. So, they sure earned it. Their road proved to be tougher than Carolina, who didn’t miss a beat after veteran backup Curtis McIlhinney replaced Petr Mrazek for the remainder of the Metro Division Final. Mrazek could be back for Game One.

There’s an interesting contrast between the two teams. Boston possesses more skill when you throw in David Pastrnak on that top line with Bergeron and super pest Marchand. Charlie McAvoy has covered a lot for Chara. He’s serving a one game suspension tonight for his illegal check to the head of Josh Anderson, who accepted his apology during a warm exchange. Charlie Coyle and Marcus Johansson have provided scoring balance along with Jake DeBrusk and fourth line checker Sean Kuraly.

Carolina does it more by committee like their coach Rod Brind’Amour. They have gotten contributions up and down the lineup despite losing players. Aho, Teuvo Teravainen and rookie Andrei Svechnikov are the offensive leaders with veterans Staal and Williams key cogs along with rookie Foegle. Game Seven hero Brock McGinn will never have to buy another drink in Raleigh. Nino Niederreiter did in his former team last round. Dougie Hamilton, Brett Pesce and Justin Faulk all provide help on the back end.

In net, the edge should go to Rask, who’s playing the best hockey of his career. Without him standing on his head, the Bruins don’t get past the Blue Jackets. He’s been to two Stanley Cups with one as a backup behind Tim Thomas in 2011, and one as a starter in 2013. This is his first time back to this round. You know he’d love to win one as a starter and silence the critics up in Boston. He’s your leading Conn Smythe Trophy candidate entering the Conference Finals.

If he is back, Mrazek has played as well as he ever has. He’s been making the clutch stops and seems to have settled in as the Hurricanes starter. Hard to believe considering how much he struggled as a rental for the Flyers last year. He had one good year in Detroit. If he can find his rhythm, then the Canes have a puncher’s chance. He doesn’t have to match Rask. That’s up to the Carolina offense.

Conventional wisdom says Bruins in 6. Unconventional says Hurricanes in 7. Even though I’m leaning towards Boston, don’t count out Carolina. They’re very resilient and play like Brind’Amour, who led them to their only Cup in 2006. Nothing this postseason has made much sense. Expect the unexpected.