Stars, Zuccarello have one more shot 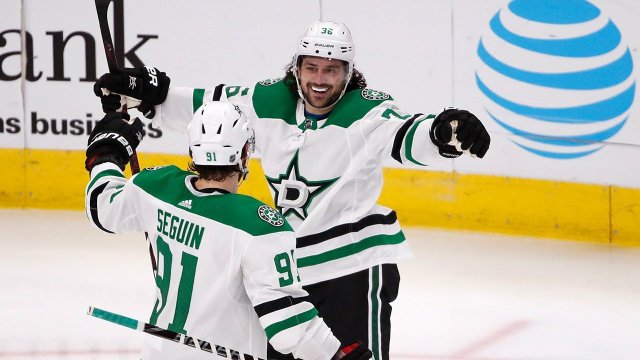 Mats Zuccarello (above congratulating Tyler Seguin) and the Stars have one more chance to make the Conference Finals against the Blues and help the Rangers. AP Photo via Getty Images.

With a golden opportunity to advance to the Western Conference Final, the Stars lost at home 4-1 to the Blues in Game Six yesterday. For Mats Zuccarello and his new team, they have one more shot tomorrow night in St. Louis.

Zuccarello has seven assists in the second round series. He recorded number seven on Tyler Seguin’s power play goal that tied Sunday’s game. But after the first period, Dallas was outscored 3-0 by a desperate St. Louis.

David Perron notched the game decider on a one-timer that beat Ben Bishop short side with 4:36 left in period two. Oskar Sundqvist made the perfect pass across for Perron’s winner. The third line center is a good player for interim coach Craig Berube. He has been all year following missing time due to the cheap shot he took from Brad Marchand in preseason. He was robbed by Bishop in the third period of Game Five of the potential tying goal. The Pens gave him away for Ryan Reaves with a first round pick for Reaves and a second round pick in 2017. Hard to believe.

In the third period yesterday, the Blues tacked on two goals including a strange one from Blues leading finisher Jaden Schwartz that made it 3-1. He scored his eighth of the postseason while Bishop was down in pain from a hard Colton Parayko shot he stopped. Unable to get to his feet, Bishop could only watch as Alex Steen passed for a Schwartz redirection that gave the Blues a key insurance marker with 12:23 remaining.

Of course, some wondered if the play should’ve been blown dead. However, Bishop was able to continue. He did give up a breakaway goal to Sammy Blais 33 seconds later before exiting the game for backup Anton Khudobin. Had Parayko’s shot hit Bishop in the mask, it would’ve been an automatic stoppage. It hit him in the upper chest.

So, a very good series will need seven to decide who advances to the Final Four. It’s definitely been the type of series any hockey fan can appreciate. If Bishop is healthy for Game Seven, I believe he can steal it. He stole Game Five with 38 saves. The road team has fared well. It should be interesting to see who prevails.

Zucc has certainly done his part. He’s been a tremendous addition for the Stars. He’s been the same playmaker who’s brought experience to a team that hasn’t had much recent postseason success. You have to go back to 2008 for the last time the Stars made the Conference Finals. A guy by the name of Brad Richards was on that club. He would later sign a contract with the Rangers and help lead them to two Conference Final appearances and a Stanley Cup Final in three years.

The Rangers already own two first round picks in June. A Dallas win tomorrow can make it three. Considering that GM Jeff Gorton used one of his second round picks to acquire and sign defenseman Adam Fox, it would be nice to recoup another first round pick. That way he can consider using it and the Winnipeg first to move into the top 10 and try to grab American finisher Cole Caufield.

Either way, we shall see what happens.

Derek Felix is sports blogger whose previous experience included separate stints at ESPN as a stat researcher for NHL and WNBA telecasts. The Staten Island native also interned for or hockey historian Stan Fischler and worked behind the scenes for MSG as a production assistant on New Jersey Devil telecasts. An avid New York sports fan who enjoys covering events, writing, concerts, movies and the outdoors, Derek has covered consecutive Staten Island Yankees NY Penn League championships in '05 and '06. He also scored Berkeley Carroll high school basketball games from '06-14 and provided an outlet for the Park Slope school's student athletes. Hitting Back gives them the publicity they deserve. In his free time, he also attends Ranger games and is a loyal St. John's alum with a sports management degree. The Battle Of Hudson administrator and chief editor can be followed below on Twitter and Facebook.
View all posts by Derek Felix →
This entry was posted in NHL Playoffs and tagged 2019 NHL Playoffs, Ben Bishop, Blues, Brad Richards, Cole Caufield, Colton Parayko, Jaden Schwartz, Jeff Gorton, Mats Zuccarello, Rangers, Stars, Tyler Seguin. Bookmark the permalink.