Official: Sather to step down as Team President 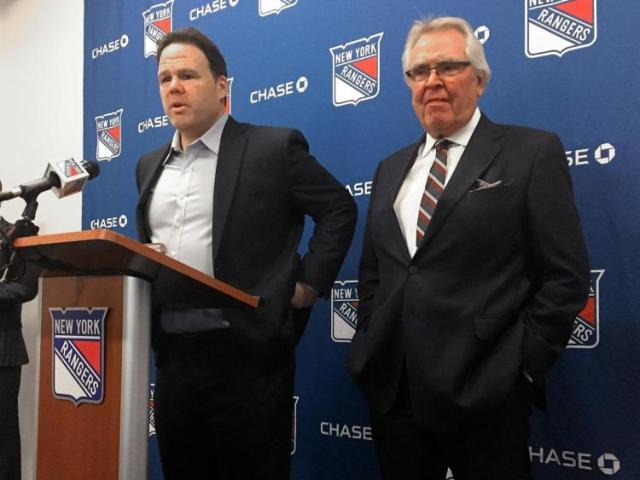 Last night, TSN’s Bob McKenzie reported that this could be it for Glen Sather as Team President. Here is the key information.

Is Glen Sather stepping down as president of NYR? Multiple sources suggest it’s likely to happen in the near future, that this is Sather’s call and that he would still be an advisor to James Dolan, executive chairman and CEO of MSG, but NYR would be looking for a new president.

It wouldn’t be a surprise. Slats is getting up there. Since relinquishing his role as Rangers GM, which went to Jeff Gorton, he hasn’t been as involved in the team’s daily transactions. However, he’s lent a voice to Gorton including signing off on the rebuild that included a public team letter addressing the fans.

UPDATE: Sather confirmed to Larry Brooks of the NY Post that he is stepping aside. He will still be in an advisory role to CEO James Dolan at MSG. Here’s a look back at his 19 years as both Team President and GM:

As much criticism as he’s received over the years, Sather rebuilt the team following the lockout to turn them into one of the NHL’s better clubs. He molded the first roster that got back to the playoffs by surrounding Jaromir Jagr with Czechs Martin Rucinsky, Martin Straka, Petr Prucha, Marek Malik and Michal Rozsival. Brendan Shanahan was signed the following year.

Signing Michael Nylander was a smart move. He centered Straka and Jagr in ’05-06 when No. 68 set new franchise single season marks in goals (54), points (123), power play goals (24) and shots on goal (368). His nine game-winners matched Mark Messier and Don Murdoch for the most in a single season.

Sather also made underrated moves like adding Steve Rucchin and Petr Sykora to help that team succeed. Even though they were swept by the Devils in the first round, a new era was born thanks to former 2000 seventh round pick Henrik Lundqvist. It’s hard to believe at 37, the franchise leader in wins (449) and shutouts (63) is still here. The only Vezina a Ranger goalie has won since John Vanbiesbrouck in 1986. Lundqvist won it in 2012 by winning a career best 39 games with a 1.97 GAA, .930 save percentage and eight shutouts.

Ultimately, the teams Sather constructed fell just shy of their goal. They lost in the Stanley Cup Final to the Kings in 2014 and fell in seven games to the Lightning in the Eastern Conference Final in 2015. He took big risks by going all in on Rick Nash, Martin St. Louis and Keith Yandle. Even though those teams didn’t win the Cup, those were the right moves. Ditto for signing Marian Gaborik and Brad Richards with the latter playing a key role in helping the Rangers rally from a 3-1 deficit to beat the Penguins in 2014. Richards scored and set up big goals in 2012 when the team made its first trip to the Conference Finals since 1997. Gaborik had a huge goal in sudden death set up by Richards, who also had the primary assist on St. Louis’ series clincher versus Pittsburgh two years later.

There were tough decisions like choosing Dan Girardi and Marc Staal over captain Ryan Callahan, who was dealt for St. Louis with two first round picks. Viewed as overpayment. Without St. Louis, there’s no run in 2014. How about that overtime winner he scored to beat the Canadiens in Game 4? Top shelf. It’s too bad they didn’t win in the two years with him.

Key young players like Callahan, Brandon Dubinsky and Artem Anisimov were integral parts of the team becoming a contender. So too were under the radar team guys such as Brian Boyle, Brandon Prust and the controversial Sean Avery. It’s hard to believe that was so long ago.
Chris Drury was brought in one summer with Scott Gomez. Even though it didn’t work out the way they envisioned, Slats made perhaps his best deal when he got Montreal to take Gomez that resulted in the team stealing away future captain Ryan McDonagh. A trade that haunted Montreal, particularly in the ’14 Conference Final when McDonagh dominated them.

There were smart moves like signing former Blackhawks first round pick Kevin Hayes and landing virtual unknown Mats Zuccarello, who only became one of the most popular players in team history. It’s sad to think he’s now on Dallas trying to help lift the Stars to a run. Ditto for Hayes with Winnipeg where he’s formed a dynamic duo with emerging star Kyle Connor.

Meanwhile, McDonagh has been brilliant in his first full season in Tampa. He’s over 40 points and chasing the Bud Light Plus/Minus title. At last check, I think he was plus-38. It’s odd how you have Mac, Cally, Danny G, Anton Stralman and J.T. Miller all chasing a Cup with the President’s Trophy winning Lightning, who have won 60 games. Yikes.

There are always up and downs when you look at what Sather has done since replacing Neil Smith. It’s easy to forget how bad a situation Smith left him. However, hiring Ron Low and Bryan Trottier were unmitigated disasters. The Eric Lindros trade was a calculated risk. It was working in Year One until Lindros had his bell rung in San Jose. Right around the same time I relocated to Bristol at ESPN. I can still recall watching them get pulverized by the Coyotes on New Year’s Eve at the trailer. Wow.

Had Lindros stayed healthy, it could’ve been a different story altogether. Instead, he wasn’t the same following the concussion. However, he still wound up a point-per-game producing 37 goals with 36 assists for 73 points over 72 games in ’00-01. Lindros centered the FLY Line that season flanked by Theo Fleury and Mike York. If only Fleury didn’t have all his off ice issues due to being sexually abused in juniors. Sickening. I’m so glad he was able to survive, make a full recovery and become the strong person he is today. I still have a photo of us saved from meeting him at a book signing.

You can also point towards some of the Sather epic fails during that awful error. I misspelled it intentionally. Signing Vlad Malakhov over Mathieu Schneider. The Bobby Holik disaster. The Mike Dunham (Doneham) trade after Mike Richter got hurt. Drafting Al Montoya. At the time, they didn’t know what they had in Lundqvist. That draft sucked. Bringing back Alexei Kovalev. It didn’t work out for him here. Then, they traded him to Montreal for an awful return of Jozef Balej, Garth Murray and Bruce Graham. Who? Exactly. Dave Karpa (Krappa), Igor Ulanov, Darius Kasparaitis (Kasparminus), Scott Fraser.

It’s too bad Pavel Bure got hurt because he would’ve been great. The explosiveness was still there before Mike Danton ended his career in preseason. So much went wrong with those teams. Even Messier II didn’t work. But he did get a memorable send off which I was at when The Garden rocked. The Dan Blackburn freak injury that finished his career was typical Rangers luck. Stefan Cherneski?

The regrettable Brian Leetch trade without even getting his consent and moving him on his birthday. Holy moly. Jarkko Immonen, Max Kondratiev (became Sykora), and draft picks that became Lauri Korpikoski and Michael Sauer. It didn’t exactly work out. He also gave away Korpikoski for Enver Lisin. What about taking Hugh Jessiman over Zach Parise? Yikes.

I guess had the team won a Cup in the window between ’12-15, Sather would be viewed differently. Derek Stepan, Michael Del Zotto, Callahan and Dubinsky all had success here. So did Fedor Tyutin before he was moved for Nikolai Zherdev. Stralman was one of Slats’ best signings. He also became one of his biggest mistakes, letting him go to Tampa while bringing in Dan Boyle.

Sather’s health is rumored to be declining. Hopefully, he’s getting all the help he needs. On an emotional day for my family where we lost our aunt on my Mom’s side, I can sure relate.

Sather indicated that he wouldn’t be doing this if the organization was in turmoil. He’s happy with the direction under Gorton with assistant GM Chris Drury. He will assist them in the search for a new Team President, which they hope to have in place by the Draft.

His one regret is that they didn’t win the Cup, referencing the three gut wrenching overtimes at Los Angeles.

Adam Fox Update: Correcting one thing I said regarding Hobey Baker finalist Adam Fox, who plans to return for his senior year at Harvard. He has to play it out before he can become a unrestricted free agent next summer.

If at that point he doesn’t sign with Carolina, then he will go on the market in 2020. I still don’t know if I would give up anything for his rights. See the Sabres and Jimmy Vesey. That guaranteed nothing.