My thoughts on the Steven McDonald Award 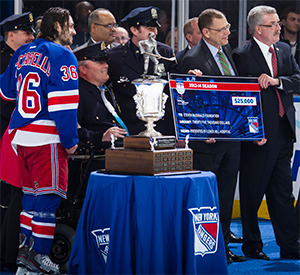 In about half an hour, the Rangers will introduce Steven McDonald’s family to the crowd at MSG. They’ll get a standing ovation as always on an emotional night. It’ll be loud and what all 41 home games should be, but for a very different reason.

The Steven McDonald Award has been in existence since 1987-88 in honor of former police officer Steven McDonald, who was shot in the line of duty paralyzing him from the neck down.

The former NYPD detective became a true inspiration for this city. Despite needing a ventilator to breathe after becoming a quadriplegic due to the serious nature of his injuries, he stayed strong for nearly 30 years until his death on Jan. 10, 2017.

It’s astonishing to think how much he means to New York City. He forgave the shooter, who was only 15 at the time. Ironically, Shavon Jones died in a motorcycle incident after serving nine years in prison. He called McDonald to apologize.

No matter what, it’s a sad story. The Rangers created the prestigious award over 30 years ago. It recognizes the Ranger who goes above and beyond the call of duty. A check of $25,000 is presented to the winner, which is then donated to the Steven McDonald Foundation.

In 10 minutes, son Conor and wife Patti will carry on the proud tradition. Sergeant McDonald will announce the 2018-19 winner. It’ll be another special moment at The Garden.

It’s expected to be Mika Zibanejad. The team’s leading scorer has had a tremendous season setting careers highs in goals (30), assists (42) and points (72). He’s the first Ranger to register 30 goals and 70 points since Marian Gaborik.

I believe the 25-year old center is a worthy choice. A future captain, he’s certainly put in the work and become a true number one center. However, he’s also the Team MVP.

For that reason, I voted for Vladislav Namestnikov. When I think of what the award symbolizes, it’s not about the most talented player or even the best one. Last year, fans voted for Henrik Lundqvist. I voted for Kevin Hayes because I felt he was the player who gave everything and was the most consistent.

This is a award that once went to Jed Ortmeyer. That’s the kinda player who should win. It’s hard to fathom that Jesper Fast has never won it before. He epitomizes what it’s all about.

That’s how I feel about Namestnikov, who might not have the fancy numbers. He’s just given a consistent effort after his one appearance in the Quinn Bin. I know he won’t win. But he definitely should get votes.

There’s also a game against Ottawa. I may or may not recap it. That doesn’t matter. What’s more important is what’s about to happen on the ice before. That Matters most!

Derek Felix is sports blogger whose previous experience included separate stints at ESPN as a stat researcher for NHL and WNBA telecasts. The Staten Island native also interned for or hockey historian Stan Fischler and worked behind the scenes for MSG as a production assistant on New Jersey Devil telecasts. An avid New York sports fan who enjoys covering events, writing, concerts, movies and the outdoors, Derek has covered consecutive Staten Island Yankees NY Penn League championships in '05 and '06. He also scored Berkeley Carroll high school basketball games from '06-14 and provided an outlet for the Park Slope school's student athletes. Hitting Back gives them the publicity they deserve. In his free time, he also attends Ranger games and is a loyal St. John's alum with a sports management degree. The Battle Of Hudson administrator and chief editor can be followed below on Twitter and Facebook.
View all posts by Derek Felix →
This entry was posted in NYRangers and tagged Conor McDonald, Extra Effort Award, Jed Ortmeyer, Mika Zibanejad, Patti McDonald, Rangers, Steven McDonald, Vladislav Namestnikov. Bookmark the permalink.