Game #67: Athanasiou beats Lundqvist in the shootout to deal Rangers another tough loss

When the Rangers and Red Wings get together, there’s always one guarantee. Henrik Lundqvist and Jimmy Howard will have a goalie duel that is decided by a goal. It also usually requires extras.

That was the case tonight with Howard getting the better of Lundqvist in the shootout. He stopped all three shooters and had a bit of luck when Pavel Buchnevich hit the goalpost. That allowed the host Red Wings to prevail over the Rangers 3-2 at Little Caesars Arena. 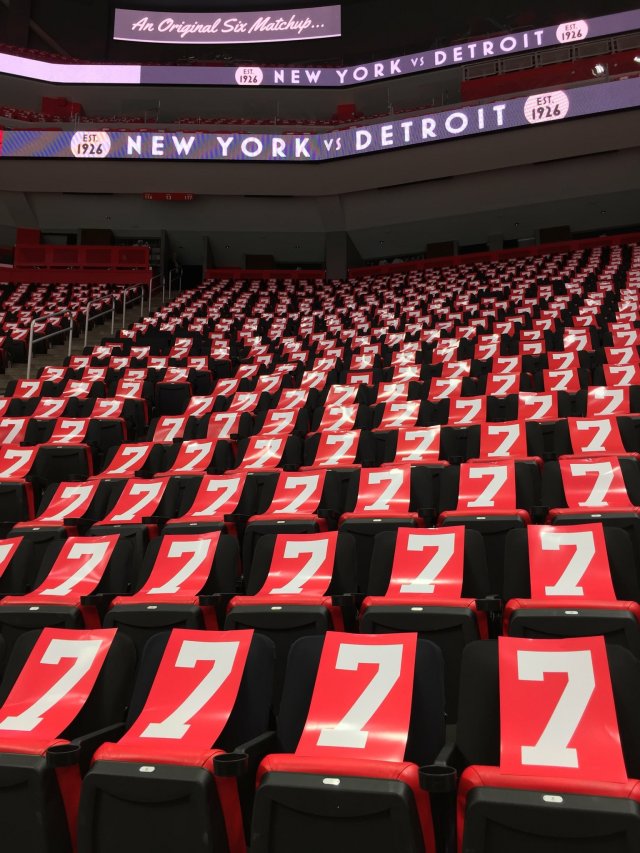 The Red Wings honored Ted Lindsay with the Number 7 on their jerseys and seats. AP Photo via Getty Images courtesy NYRangers.

The story before the game was Detroit honoring legend Ted Lindsay, who passed away at age 93 earlier this week. A big part of the famed Production Line that included Sid Abel and Gordie Howe, Lindsay was a terrific player who helped the Red Wings win four Stanley Cups between 1950 to 1955. He won the Art Ross once and was a NHL First All-Star a remarkable eight times.

The Red Wings all wore a special No. 7 patch on their jerseys during the game. Here is a nice video tribute they put up on their Twitter account.

Tonight we honor, we remember and we celebrate Ted Lindsay. #RIP7 pic.twitter.com/kPmsLiL8fL

On a emotional night, maybe it was fitting that they got a big performance from one of their young players. Andreas Anathasiou was their best player. A streaky scorer, the talented forward with the game breaking speed and world class shot recorded a goal, assist and the shootout winner for the Red Wings.

The Rangers had trouble dealing with his speed in transition. With the game tied in the third period, a near miss at one end by Brett Howden lead to Athanasiou coming on a two-on-one the other way and sniping his 23rd high glove on Lundqvist at 6:15. On the play, Tony DeAngelo got caught after having his rebound blocked. That left only Brady Skjei back. He gave Lundqvist the shot, but Athanasiou has a excellent one and flat out didn’t miss.

Andreas Athanasiou with the snipe and salute to Ted Lindsay after the goal pic.twitter.com/bXwjgnBwOy

In a back and forth game that saw Lundqvist have to stop 40 shots in regulation (43 of 45 overall), Buchnevich was flying all night. Having already gotten the Rangers’ first goal thanks to a great effort for a second and third rebound past Howard, he took a good Brendan Lemieux feed and broke in on the Detroit netminder and threw a backhand upstairs that Howard only got a piece of for his career high 15th goal with 5:31 left.

The pass by @blemieux22.The goal from Pavel Buchnevich.

It was a great scoring play. Both DeAngelo and Lemieux got assists with the former Winnipeg Jet recording his first career two assist game. He’s fit in nicely since coming over as part of the Kevin Hayes trade that netted the Rangers a first round pick. Lemieux seems to have some chemistry with Buchnevich. Two totally different players in terms of skill and style, the Rangers’ Odd Couple work well together. They definitely looked good on a third line with Howden, who just cannot catch a break.

“We’re a competitive group… I don’t think there’s any time in the game when we’re going to quit. That’s kind of what we’re trying to build towards.” – Brendan Lemieux pic.twitter.com/GZAmiIUuBi

Speaking of which, Howden had another good opportunity to win the game in overtime. However, he couldn’t finish. There’s no questioning the effort the rookie center puts in. At some point, he needs to score a goal. Hopefully, before the season runs out. There’s still 15 games remaining including a MSG rematch versus the Winged Wheel.

Of note, coach David Quinn didn’t play Chris Kreider much at all in the third. Unsatisfied with the alternate captain, he sent him out for a four-on-four shift, and gave Kreider a turn with little used 2017 first round pick Lias Andersson on a make shift fourth line with Jimmy Vesey. Why Andersson received less than nine minutes of ice-time is beyond me. It’s puzzling. What’s the point if he’s barely gonna play?

The three-on-three was unbelievable. Both teams created chances. Buchnevich made a bid for his first career hat trick, but Howard closed the door on a five-hole try. Athanasiou had another great rush, but was denied by Lundqvist, who also stoned Bertuzzi with his team still trailing at a crucial point of the third prior to Buchnevich tying matters.

A big reason why we're in OT? This guy. 👇 #NYR pic.twitter.com/GZpAZ96xcm

Without Kevin Shattenkirk, who was a healthy scratch, Quinn went with Mika Zibanejad, DeAngelo and Buchnevich in the shootout. No one was able to solve Howard, who got the lone goal he needed from who else but Athanasiou on a good shot that beat Lundqvist five-hole in the top of the second.

Following DeAngelo getting stopped by Howard, Lundqvist made a last ditch diving pad save to rob a grinning Tyler Bertuzzi, who couldn’t believe it. That left it up to Buchnevich. The Rangers’ best player on the night moved in and had Howard beaten, but his wrist shot rang off the post to give the Red Wings the victory.

The best part of the game was listening to an aggravated Zibanejad, who’s sick of losing. That’s six straight losses (0-2-4). Listen to the frustration. He’s not having it.

Hear from Mika after tonight’s game about the #NYR effort and Buch’s big game. pic.twitter.com/XQFqDTXZls

Notes: Shattenkirk, Fredrik Claesson and Connor Brickley sat out. … Red Wings were without leading scorer Dylan Larkin and top D Mike Green, who’s out for the remainder of the season with a virus. … Howard finished with 32 saves and went 3-for-3 in the skill competition to pick up his first win since Valentine’s Day. … In a eye popping statistic that won’t make the coaching staff happy, NYR got killed on face-offs losing 67 percent of them to the Wings (43-and-21). The combination of Athanasiou and Luke Glendening went 31-and-8. How bad was it? Zibanejad won 7 and lost 13. Ryan Strome lost 11 of 16. Andersson went 3-and-6. … Shots were 45-34 Detroit and shot attempts were 84-50. Way too many with the loss of so many draws contributing. Until they address this key area, it’ll continue to be problematic going forward. … Next up for the Rangers (27-27-13) are the Devils on Saturday night at MSG. I won’t be around for that.

Derek Felix is sports blogger whose previous experience included separate stints at ESPN as a stat researcher for NHL and WNBA telecasts. The Staten Island native also interned for or hockey historian Stan Fischler and worked behind the scenes for MSG as a production assistant on New Jersey Devil telecasts. An avid New York sports fan who enjoys covering events, writing, concerts, movies and the outdoors, Derek has covered consecutive Staten Island Yankees NY Penn League championships in '05 and '06. He also scored Berkeley Carroll high school basketball games from '06-14 and provided an outlet for the Park Slope school's student athletes. Hitting Back gives them the publicity they deserve. In his free time, he also attends Ranger games and is a loyal St. John's alum with a sports management degree. The Battle Of Hudson administrator and chief editor can be followed below on Twitter and Facebook.
View all posts by Derek Felix →
This entry was posted in NYRangers and tagged Andreas Athanasiou, Brendan Lemieux, Brett Howden, Henrik Lundqvist, Jimmy Howard, Lias Andersson, Mika Zibanejad, No. 7, Pavel Buchnevich, Production Line, Rangers, Red Wings, Ted Lindsay, Tony DeAngelo, Tyler Bertuzzi. Bookmark the permalink.