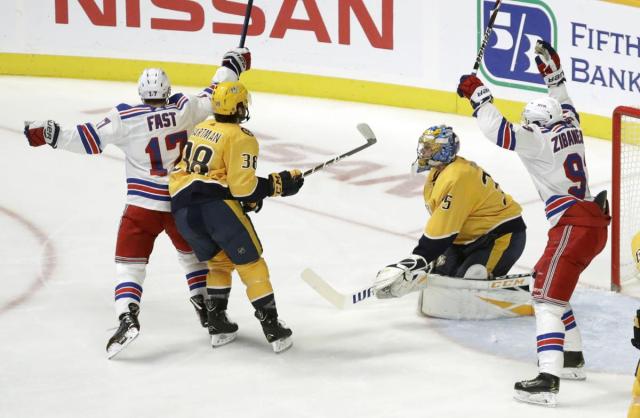 Jesper Fast celebrates one of his two goals with Mika Zibanejad in a Rangers 4-3 road win over Nashville. AP Photo via Getty Images

I’ll be honest. I wasn’t expecting a whole lot going into Nashville. Anyone who’s followed this team knows how much of a disaster they’ve been on the road. On paper, it seemed like a mismatch. Maybe for that reason, I was more focused on the Canada vs Czech Republic game in the World Junior Championship. Plus the big clash between Team USA and Sweden, which lived up to the hype thanks to an amazing comeback by our country in a 5-4 overtime loss.

.@VallysView & @AnsonCarterLA have the breakdown of why the Kreider-Zibanejad-Fast line worked so well in the win over Nashville. #NYR pic.twitter.com/SeK072yidD

Sometimes, when you least expect it, your teams rise to the occasion to surprise you. That is exactly the scenario that played out in Nashville. The Rangers showed a lot of character and heart in coming back for a well deserved 4-3 road win over the Predators. Even more significant is that it was their first road victory in regulation.

Look who they did it against. I know the Predators have been struggling. But they’re a very good team that should be in the hunt next Spring. They just got back Viktor Arvidsson and P.K. Subban. One would think they’ll come out of the funk they’re in soon. It didn’t happen on Saturday night due to a relentless bunch of scrappy Blueshirts, who refused to lose.

Maybe the best thing for them was to get away from MSG. All the frustrating overtime losses had left our players at a loss for words with John Giannone. One look at Henrik Lundqvist the other night and I remarked that they should remove all sharp objects away from him. Haha. Kevin Hayes sounded even worse following the faceoff screw job. Considering that I saw an even worse screw job last night in the St. John’s/Seton Hall game, I’m becoming numb. That btw was the worst officiated game I’ve ever seen. Nothing else needs to be said.

The road can present unique challenges for teams at this point of the season. We’re almost at the halfway point. Now, we’ll see what this team is made of. With the playoffs moving So Far Away like a classic Dire Straits song, most of these players are playing for jobs. Pride is on the line. Whether their futures are in the Big Apple, or another NHL city, they know what the situation is.

The Rangers got back a couple of key players. Both Jesper Fast and Cody McLeod returned to the lineup. The second player I was surprised about. But I forgot that when McLeod plays, the team has a good record. I believe they improved to 12-5-0 with him in the lineup. Strange coincidence? Or does his veteran presence on the bench have a positive influence on the guys? I’ll leave that for you to decide.

I guess it isn’t too surprising that the club sent Lias Andersson down to Hartford. He needs to play more minutes, and won’t here. So, it makes plenty of sense. Encouraging was that the 2017 first round pick showed improvement recently. But I don’t want him buried on the fourth line. The picture could be a lot clearer following the February 25 trade deadline.

I didn’t see much of the first two periods, and only caught the key parts of the third period comeback. I’ll just say that what we got was nice. Finally, a team that made the most of its breaks and did to a good opponent what’s happened far too often since both Fast and McLeod went down. Maybe it’s not a off occurrence that Fast’s imprints were all over the win. He recorded three points, including the game-winner on a well executed play by all five skaters.

Mika Zibanejad had been a bit cool lately. His plus/minus has suffered going up against the opposition’s best. But tonight, he had a great game recording a career high four assists. That included the primary helper on Fast’s second of the game. A perfect centering feed from behind the net for a quick Fast one-timer that beat Pekka Rinne with 12:25 left in regulation. Three of Zibanejad’s four assists were primary. He’s having a much better year at five-on-five than last season. He’s on pace for more assists and a new career high in points. That contract which pays him an average cap hit of $5.35 million thru 2022 looks like a bargain. Especially when you consider that the Penguins gave Jake Guentzel a five-year extension worth a AAV of $6 million. That’s insanity. What the heck do you think Kevin Hayes (assist to extend point streak to nine) is gonna ask for? What about Chris Kreider, who is up to 20 goals a year away from unrestricted status?

For the pro Artemi Panarin crowd who want to see this regime overpay a good playmaking left wing into his 30’s, taking care of their own should be a higher priority. Hayes is making the decision very difficult. It’s a good thing Filip Chytil can shift to center if Hayes does go. Otherwise, I would definitely re-sign him. But the cost continues to go up. It’s no longer going to be $6.25 million AAV. It could be closer to $7 million for him. What the heck do you think Panarin is gonna cost? Same for Mark Stone. I believe the organization should go after a good defenseman over a perimeter oriented Russian forward, who’ll likely see his point production drop here. D is a more pressing need.

Marc Staal continues to be the best defenseman they got. He’s continuing to improve with and without the puck both defensively and now offensively. He scored his third of the season by coming out of his own end following a good defensive play, and making a smart pinch for the tying goal from Fast and Zibanejad at 4:23 of the third. This is the best he’s looked since 2012. He’s more confident at reading and reacting. Similar to how he played under John Tortorella. He really could be movable if a contender comes calling.

Two of the three Nashville goals came via the power play on a pair from veteran Nick Bonino. That means the Rangers had the edge five-on-five, outscoring the Predators 3-1. The shots were also tighter with it favoring the Preds 27-20. But Kevin Fiala got the only tally at even strength.

Lundqvist outdueled Rinne to finish with 34 saves. Rinne only had 18 on 22 shots. That had to feel good for our goalie, who hasn’t been getting wins. He looked a lot calmer in the postgame, heaping praise on his teammates.

I want to comment on one other thing that annoyed me. That dirty bastard Zac Rinaldo got away with a sneaky high hit from the blind side on Zibanejad late in the second. He’s such a poor excuse of a hockey player. How is he even still employed? Of course when McLeod had words with him, he didn’t fight. He’s a piece of garbage! This guy has been pulling these cheap shots forever. It doesn’t matter if it’s the Flyers, Coyotes and now the Predators. It’s ridiculous. Of course, there was no call. It better be reviewed by NHL Player Safety. He better be suspended.

Derek Felix is sports blogger whose previous experience included separate stints at ESPN as a stat researcher for NHL and WNBA telecasts. The Staten Island native also interned for or hockey historian Stan Fischler and worked behind the scenes for MSG as a production assistant on New Jersey Devil telecasts. An avid New York sports fan who enjoys covering events, writing, concerts, movies and the outdoors, Derek has covered consecutive Staten Island Yankees NY Penn League championships in '05 and '06. He also scored Berkeley Carroll high school basketball games from '06-14 and provided an outlet for the Park Slope school's student athletes. Hitting Back gives them the publicity they deserve. In his free time, he also attends Ranger games and is a loyal St. John's alum with a sports management degree. The Battle Of New York administrator and chief editor can be followed below on Twitter and Facebook.
View all posts by Derek Felix →
This entry was posted in NYRangers and tagged Chris Kreider, Cody McLeod, Henrik Lundqvist, Jesper Fast, Kevin Fiala, Kevin Hayes, Marc Staal, Mika Zibanejad, Nick Bonino, Pekka Rinne, Predators, Rangers. Bookmark the permalink.