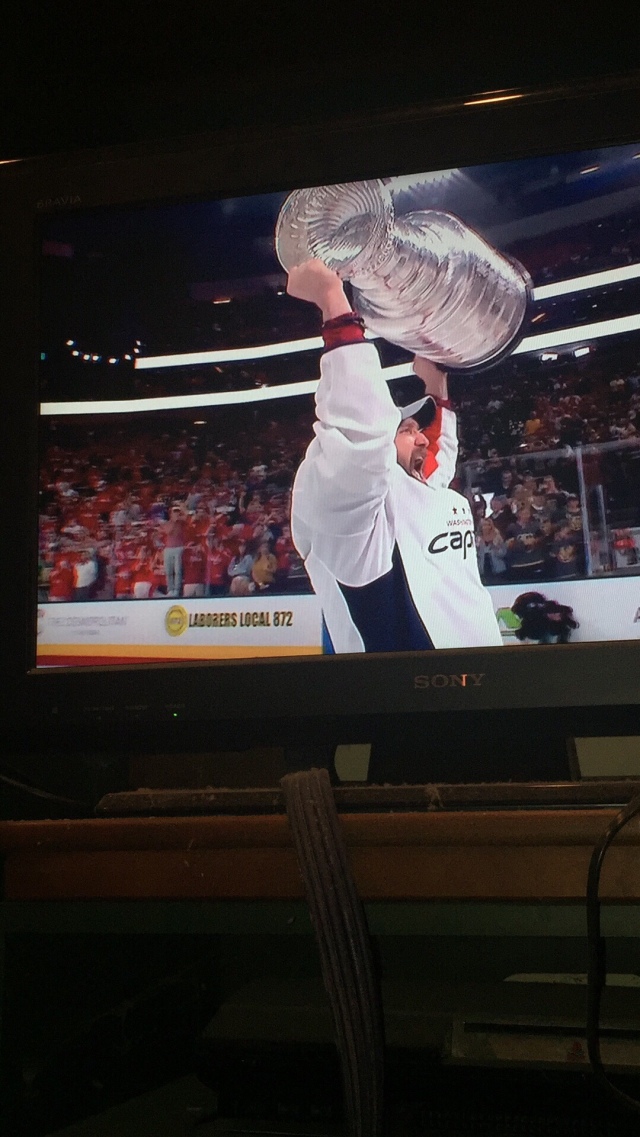 It took only five games. But getting the fourth one against the Golden Knights proved difficult for the Capitals. Led by their captain, they fought back after falling behind a goal to stun Vegas 4-3 in Game Five to capture their first ever Stanley Cup.

Alexander Ovechkin is finally a Stanley Cup champion. The game’s most electrifying superstar scored a franchise playoff record 15th goal to lead the postseason. He was magnificent during the Caps’ run. Playing a more complete game that included hustling back defensively, selling out to block shots and leading by example, the Great Eight is the most deserving player I can think of to win Lord Stanley. The passion he plays with and how excited he gets for teammates’ success is second to none.

It’s truly great to see Ovechkin silence the critics, who had him pegged based off past Washington playoff failures. The thing that got lost in those defeats is he always performed well. They just didn’t have the right cast until now. Of course, nobody saw it coming. Not after they won the Metropolitan Division. Not when they fell behind 2-0 to Columbus in the first round. They weren’t good enough to be in the same class as the Penguins, Lightning or Bruins. I didn’t see it. I was proven wrong as were many pundits.

Congrats to the Washington Capitals and their fans, who waited over 40 years for this moment. Many of the sea of red made the trip to Vegas to see their team stage a nice comeback to make history. Goals by unsung heroes Devante Smith-Pelly and Lars Eller turned a one-goal deficit in the third period into a one-goal lead.

It was that kind of team effort that personified these Caps. From top to bottom, everyone contributed. All four lines and three defense pairs were involved. When it wasn’t Ovechkin or leading scorer Evgeny Kuznetsov, there was Tom Wilson scoring and setting up big goals while playing on the edge with a freight train of monster hits that crushed the Golden Knights defense. He did the same thing to the Lightning in the Conference Final. If it wasn’t Nicklas Backstrom or T.J. Oshie making plays, it was rookie Jakub Vrana scoring a huge breakaway goal top shelf past Marc-Andre Fleury to put the Capitals up 1-0 in the second period.

Throughout the run, you had key pickup Michael Kempny scoring and setting up goals while paired with leading scoring D John Carlson. A move nobody gave much thought to. The Caps gave up a third round pick to Chicago. Who knew? The same can be echoed for veteran Brooks Orpik. Supposedly ‘washed up,’ the proven physical blueliner who had the only Cup on the roster with the Pens, was a tower of strength in a more limited role on the third pair. He even scored in this series and it was great keep and shot that allowed Smith-Pelly to tie the score with 10:08 left.

As fate would have it, Eller would get the Stanley Cup clincher 2:31 later. The first ever player from Denmark to get his name on the trophy also had the biggest goal in Game Three of the first round. His overtime winner against the Blue Jackets flipped the script. He was splendid in a second line role when Backstrom missed a few games. He won key draws and logged big minutes under winning coach Barry Trotz. He played power play and killed penalties. He was the most indispensable Cap. It was fitting that he got the tip in front from Brett Connolly and Andre Burakovsky with 7:37 remaining.

Braden Holtby made 28 saves with many enormous when his team trailed following consecutive Knights tallies from David Perron and Reilly Smith. Holtby was at his best keeping a more determined Vegas at bay. Without him, the series goes back to D.C. Who knows what could’ve happened if there was a Game Six.

The Caps were relentless to get it done last night. They did it by sending the expansion Golden Knights to their first four-game losing streak in its inaugural season. A special one that’ll be remembered despite the final outcome. They played their butts off for coach Gerard Gallant. The Caps earned it.

Even though the Vegas show closed at T-Mobile Arena on Thursday night, they have nothing to be ashamed of. Nobody could’ve predicted this for a first year franchise built from scratch. I’ve seen way too many sourpusses rain on their parade. They took players other teams didn’t want and turned into a division winner, who wouldn’t be denied in conquering the West.

They embarrassed the Kings behind Fleury and the top line of William Karlsson, Smith and Jonathan Marchessault. They then beat a good Sharks team in a hard fought six before stunning the hockey world by wearing down Winnipeg in five. That’s a helluva run. They got beat by a better team. Despite that, most of the games were competitive. Even Game Four was misleading. For nearly two games, nothing went in for Vegas. That was despite better play until things imploded following a few goalposts and close calls. Sometimes, the hockey gods can be cruel. They were on the Caps’ side.

The on ice Cup presentation included fireworks as fan favorite Gary Bettman presented Ovechkin with the Conn Smythe and then the sweetest trophy in all of sports. It was truly a magic moment to behold. A screaming Ovi for all to see cheering like a kid with glee. It finally was his time to shine along with his team. The last one standing. Well deserved.