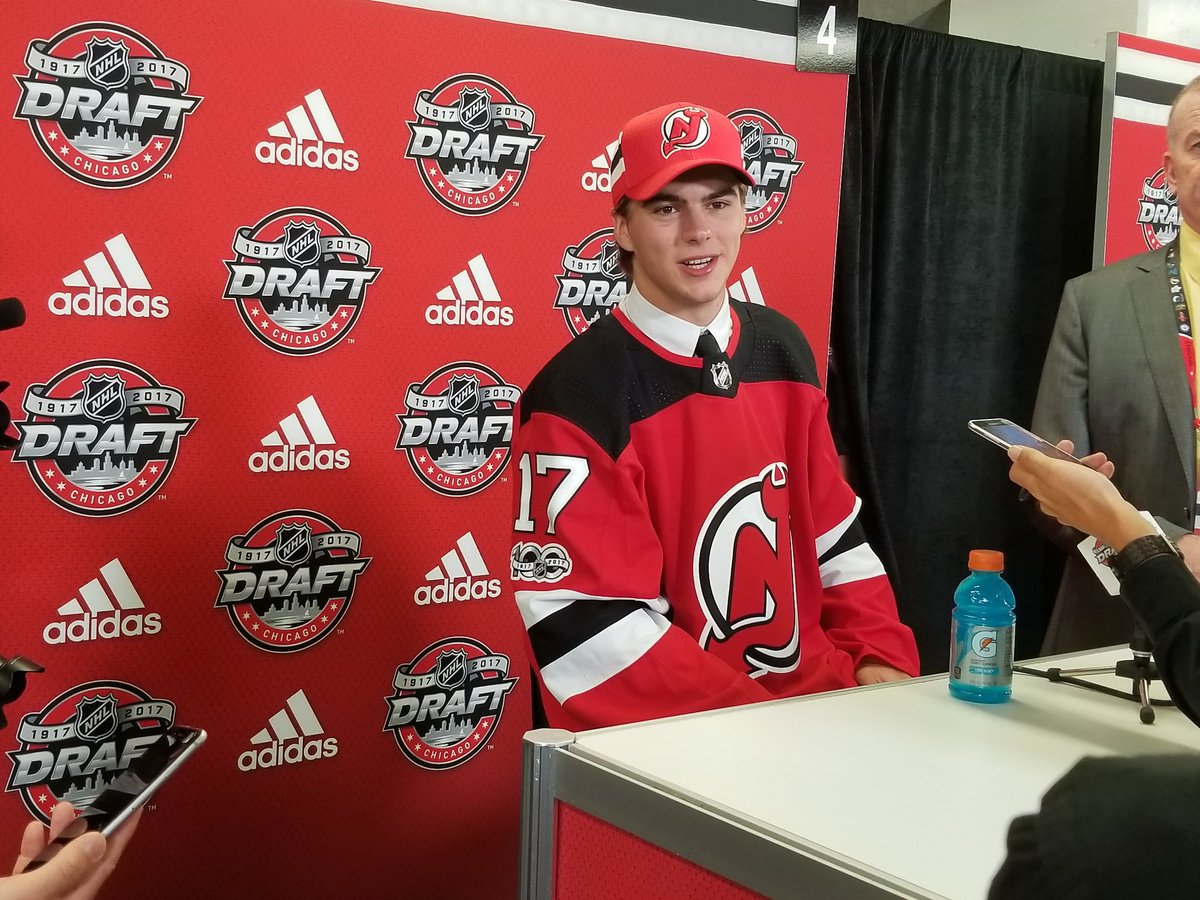 After nearly two months of speculation, rumors and hype – finally it was time for Ray Shero and the Devils to choose between Nico or Nolan.  Although the initial pre-draft hype had Wheat Kings center Nolan Patrick being the top-rated prospect in the 2017 NHL Draft, most of the ranking lists had shifted over to the shift-y Swiss center Nico Hischier of the Halifax Mooseheads being #1 toward the end.  In recent days the whispers of Shero and his scouting staff leaning towards Nico started to leak out so it was little surprise when the Devils’ GM went to the podium to officially announce Hischier as the top pick of this draft and the newest New Jersey Devil.

Of course that meant that Patrick went to the division rival Philadelphia Flyers at #2, adding another dimension to an already hot rivalry – though one that’ll have to wait till mid-January to heat up on the ice, since in its infinite wisdom the NHL packed all four Devil-Flyer games into a one-month stretch from mid-January (more than three months into the season) to mid-February.  Being drafted #1-2 and playing with division rivals ensure that Nolan and Nico will always be compared.  Of course tonight for both these young men, they’re just excited over the opportunities that lay ahead.

Coming soon to The Battle of the Turnpike. #DevilsDraft pic.twitter.com/H7X4dzR0xs

For Hischier, the first Swiss player to ever be drafted #1, it’s been a meteoric rise since the wintertime when he was ranked as a mid first-rounder until an outstanding WJC (seven points in five games against top competition) and a terrific first season in the QMJHL for Halifax (38 goals-48 assists-86 points in 57 games) rocketed him up the rankings, first on a par with Patrick, and then slightly above him.  Perhaps the only serious question about the offensively gifted and speedy Hischier – besides the obvious skepticism about him only being in the spotlight for one season – is whether his skillset will ultimately translate as a center or as a wing at the highest level.  Of course his size isn’t a disqualifier in today’s NHL of being a pivot and one of the Devils’ main needs is for a franchise center.  You can watch YouTube for a number of highlights, here’s the best of his WJC in the wintertime (Hischier’s #18 for the Swiss):

In addition to all his tangibles, one intangible reason to like the newest Devil is his sense of humor and command of the English language.  During the pre-draft interview with the team, at one point someone with the organization – making light of the catfish-throwing during the Stanley Cup Finals – joked with the youngster that if you threw a catfish on the ice we’d pick you #1.  Hischier didn’t say anything until after the interview ended and they asked if he had any questions, then he said ‘Where can I buy a catfish?’

There hasn’t been a lot to be excited about as a Devil fan in recent years but this young man’s imminent arrival in a Devil uniform hopefully will signal the way out of the wilderness the team’s been in the last few years since the 2012 Stanley Cup Finals (was that really just five years ago?  Seems like longer with everything that’s happened with the team since then).