Complete Effort gets Rangers back in it, Take Game Three 4-1, Sens lead series 2-1 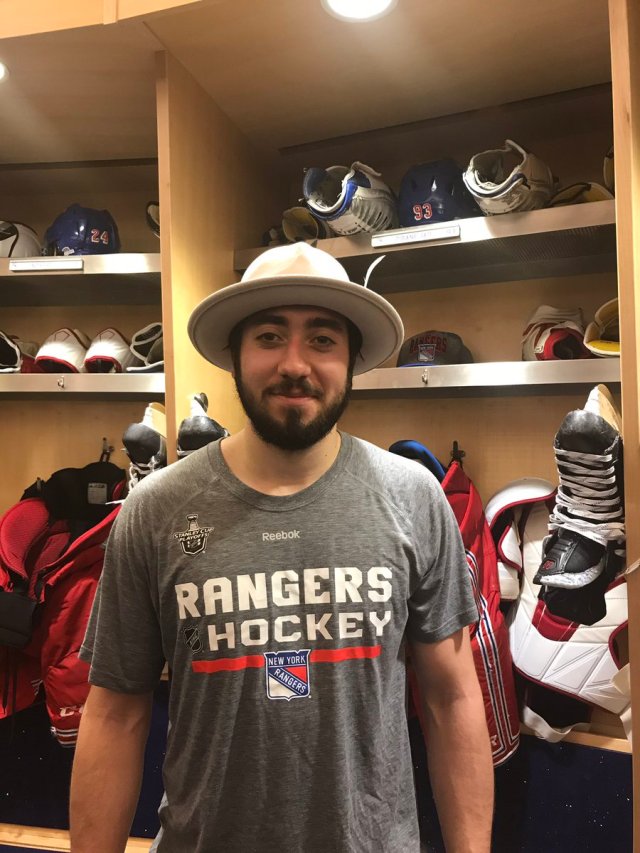 A proud Mika Zibanejad dons the Broadway Hat after a dominant effort in which he set up Mats Zuccarello early and led by example in a big 4-1 win for the Rangers who took Game 3 against the Senators to get back in the series. AP Photo via Getty Images courtesy NYRangers.

All it takes a little push back. The Rangers were successful in Game 3 due to that. They came out and took it to the Senators prevailing in a must have game 4-1 at a loud MSG. They now trail the Atlantic Division second round series 2-1 with a pivotal Game 4 Thursday. Win and the series is all tied. That will be the tough one to get. Figure the Sens to play with more urgency.

From the outset, the Rangers were hungrier to the puck and made crisp tape to tape passes getting through the neutral zone with ease. It resulted in an early goal from Mats Zuccarello. On a smart second effort play by defenseman Dan Girardi, he pushed the puck off the wall to an on rushing Mika Zibanejad. Flying all night, the former Senator went around the net beating Ben Harpur before coming out and catching the Sens puck watching. That allowed him to find a trailing Zuccarello for an easy one-timer past Craig Anderson to set the tone at 5:31.

Did you 💤 that!? Zibanejad to Zucc for the first #Blueshirts 🚨! pic.twitter.com/WBA8wH25Zf

Playing with a lot of purpose, the Blueshirts continued to swarm the Senators. They kept them pinned in their end for long stretches. The ice was indeed tilted. With Ottawa having issues with a relentless forecheck, it was only a matter of time before they fell behind by two. Anderson had made some big stops. He was particularly good at denying Zibanejad, who was easily the Rangers’ best player. He could’ve had a hat trick but settled for a primary assist with six shots, 10 attempts and three hits all in what was likely his best night as a Ranger.

In the series, Anderson has struggled at playing pucks when he’s come out of the net. He nearly cost his team Game 2 when his turnover almost resulted in Rick Nash winning it in overtime, only to be saved by Kyle Turris. In Game 3, another Anderson miscue wasn’t as fortunate. On a great keep by Zuccarello with his team changing, he moved the puck behind the net past the Ottawa D. Michael Grabner pounced on it and stuffed home a wrap around at 13:24 for a two-goal lead. It was Grabner’s fourth of the postseason, tying him for the team lead with Brady Skjei. Playing on a third line with Jesper Fast and Kevin Hayes, he was effective making good defensive reads and getting a big goal which proved to be the game-winner.

A big part of the Rangers win was their willingness to play physical. They didn’t back down delivering a few big hits along the way. One such instance came when Tanner Glass combined with J.T. Miller to to cleanly take out Zack Smith, who landed awkwardly into the boards. The gritty Ottawa forward never returned taking just three shifts (1:50). That put Ottawa down a center who’s an effective player who wins draws and plays that physical style.

In a game where Rangers coach Alain Vigneault reinserted Glass for Pavel Buchnevich playing him on a fourth line with Miller and Oscar Lindberg, it worked out well.  They were effective at getting pucks in and recovering to cycle and generate chances. It allowed Vigneault to comfortably roll four lines without any concern.

He also got the hint and played cohesive D pair Skjei and Brendan Smith more than struggling tandem Marc Staal and Nick Holden. It worked out well with the blue line more effective. Ryan McDonagh and partner Girardi had strong games with the captain logging a team high 26:52 in 32 shifts. Girardi was splendid with an assist and a few big hits with a plus-one in 29 big shifts logging 20:00.

The Rangers could easily have been up more after the first period after out-shooting the Senators 15-5. It was 15-3 before a silly Derek Stepan back pass to no one resulted in Erik Karlsson getting one last shot on a sharp Henrik Lundqvist, who didn’t have to stand on his head in finishing with 26 saves.

As expected, the second was choppier. The Sens made more of an effort to get pucks in and step up their forecheck. But despite more pressure, they were unable to get anything by Lundqvist when they needed to. Defensively, the Rangers stuck with it by boxing out in front allowing their goalie to see the shots unlike a disastrous Game 2. In particular, Girardi did a better job in this area as did teammates. Forwards also came back harder. There wasn’t the looseness we got on Saturday.

They knew what was at stake. They also was opportunistic. With Karlsson caught on a pinch colliding with a teammate, it resulted in Stepan passing for Rick Nash on a two-on-one. Using Stepan as a decoy, Nash fired a laser past Anderson short side high glove for a huge third goal with 7:49 remaining. It was his first of the series and got him into it. Stepan recorded his second point also notching a shorthanded goal last game. A positive sign.

In a period where the Sens got more opportunities, Lundqvist was there stopping 11 of 12 shots. Prior to Ottawa scoring from guess who, a great shift by the fourth line resulted in a Lindberg goal. The play was made by Glass in the neutral zone with an attacking Miller using his superb skating to undress Ottawa’s defense and then center for a wide open Lindberg in front for an easy put away that made it 4-0 with 1:43 left.

But before you could relax, there was that man Jean-Gabriel Pageau once again being a thorn in the side by getting to a great no look Bobby Ryan feed and scoring his fifth in two games just 32 seconds later to cut it to 4-1 with 1:11 remaining. Ryan made the whole play by catching McDonagh puck watching behind the net and making a great pass for an open Pageau, who finished in front. He really is a gnat. He’s been the Sens’ best forward by far.

That was it for the scoring. Despite some great individual efforts from Zibanejad, who used his speed and elusiveness during a couple of instances to get by stationary Ottawa D and force Anderson into some tough saves. Honestly, Anderson kept it from being a blowout. He was really good. He faced the higher quality chances and made some big stops to finish with 26 saves. The Rangers out-shot the Senators 30-27.

Even though they held a 10-6 edge in the third, the Sens never did get any great looks on Lundqvist, who saw the puck and stopped it. That included a couple on dangerous shooter Kyle Turris and one on Karlsson from way out which he easily covered. One such Karlsson blast never made it. He ripped on from the point that caught Ryan flush in the hip where there’s no padding. He limped off to the locker room and didn’t return.

So, Ottawa lost two forwards. Smith and Ryan. It’ll be interesting to see what Ottawa coach Guy Boucher has to say about their status. Don’t expect anything until tomorrow at the soonest. Ryan didn’t look good. Smith didn’t return after being hobbled. So, it’s possible the Sens might have to use reinforcements. Does that mean Tom Pyatt or even Chris Neil? Would they consider talented first round pick Colin White, who helped Team USA win gold at the World Juniors? We’ll see.

For the Rangers, they stuck to the game plan making it harder on the Sens. It resulted in them protecting home ice. The home team has won all three games in the series. Now, the Rangers need to repeat it on Thursday. Do it and it becomes a best two-of-three with the pressure shifting to the Senators.

Notes: Attempts were 56-54 Rangers. In the first, it was a dominant 26-12 setting the tone. … The hits went in favor of the Senatoes 34-31 with four apiece from Tommy Wingels and a invisible Derick Brassard, who remains without a point in the series. Girardi and Staal paced the Blueshirts with four each. Both were better. Staal in less ice-time (16:17) went plus-two. Outside of his failure to take Pageau, McDonagh was fantastic finishing with three shots in six attempts with two blocked shots while going plus-one in 32 shifts-26:52. … On the flip side, Karlsson had an off night finishing minus-three in 26 shifts-23:42 despite four shots in 12 attempts. Ottawa shooter Mike Hoffman was also minus-three. … Rangers blocked 19 shots compared to the Senators’ 11. Smith paced them with three while Cody Ceci had five for Ottawa. … Rangers held an edge in face-offs 29-28 with Stepan a more effective 7-and-3. Pageau paced the Sens going 14-and-6.

Mika gets the #Blueshirts Broadway Hat and adds the next piece to the puzzle! pic.twitter.com/gcrd4OrCp4

"We came out strong." – @zuccarello36 after he scored for the #Blueshirts in Game 3. pic.twitter.com/RksxujaYpC

Kovy Returns to MSG and hears the cheers. 🙂