Nick Holden raises his arms and gets ready to celebrate Mika Zibanejad’s clutch overtime winner to give the Rangers a well deserved 3-2 win in Game 5 over the Canadiens. They lead the series 3-2 with Game 6 at MSG Saturday. AP Photo via Getty Images courtesy NYRangers.

I still cannot contain my excitement over this game. The Rangers got it done. They dominated overtime in one of the toughest buildings to pull out a huge 3-2 overtime win over the Canadiens at Bell Centre. Mika Zibanejad’s goal at 14:22 of the first OT was the heroic game-winner stunning a packed crowd of over 21,000 in Montreal.

The Blueshirts now lead the emotional and intense best-of-seven first round series 3-2 with Game 6 in their building on Saturday night with a chance to advance. Game time is 8 PM at what should be a very enthusiastic MSG.

They are up because they earned it. Twice, they fought back from one-goal deficits against a very stingy Canadiens team. In what was a wild emotional roller coaster of a first period, the Rangers fell behind twice.

Almost every game has been hard fought with physical battles all over the ice. This was no exception. Before Lehkonen’s goal that opened the scoring, Rangers defenseman Brendan Smith had seen enough of Andrew Shaw. With Steve Ott getting two whacks at Lundqvist during a scrum, Smith took matters into his own hands and fought Shaw. Both went off for five-minute fighting majors. Advantage Montreal.

In one of the craziest series I’ve seen in a long time, the refs and linesmen continue to let everything go. But there have also been some mistakes. Take for example the penalty Max Pacioretty drew on Kevin Hayes. He was two feet offside when Hayes got called for holding the stick. Something MSG’s Joe Micheletti picked up right away. It was a bogus call that went in the Habs’ favor.

What transpired next was insanity. First, the Rangers tied the game thanks to one of their best forwards in the series Jesper Fast. On a real good defensive play by Zibanejad, he was able to create a two-on-one getting leading Fast in on Carey Price. Fast surprised him by going five-hole for a shorthanded goal at 15:56. A well executed play by both forwards with Fast so deserving. He’s getting rewarded for all his hustle.

But as only they can do, the Rangers gave it right back. Only 24 seconds later, the little ball of hate Brendan Gallagher took a Andrei Markov pass and skated into the slot and fired a wrist shot through traffic past Lundqvist with Tomas Plekanec in front. Amazingly, it was Gallagher’s first of the series. He’s been a dominant player for the Habs by creating all kinds of chaos. Legal or illegal, he plays the game hard. On the same power play, he got away with a high-stick to Ryan McDonagh following a clean check. That’s how it’s been called. But that came prior to Fast’s shorty.

Despite being out-shot 14-9, the Rangers trailed by one. They can thank Lundqvist for the second period. Most of it was exclusively Montreal due to consecutive power plays. Both McDonagh (slashing) and Mats Zuccarello (high-sticking) lost their discipline to hand the dangerous Habs man-advantage two golden chances to break the game open. It never happened. Lundqvist (10 second period saves) played a big part as did the penalty killers with superb efforts from McDonagh, Dan Girardi, Marc Staal, Brendan Smith and even Nick Holden.

They wouldn’t have got it done without help from the forwards. Particularly Rick Nash, who had was dominant throughout in what’s been his best series as a Ranger. He was outstanding. Not surprisingly, Nash found a way to set up Brady Skjei’s second of the series coming with 1:32 remaining in the period. Make no mistake about it. They were in that position due to Lundqvist, who really has shined in the big match-up with Price. He’s faced more shots and chances but has come through like the star he’s been on Broadway.

Late in the second, the Rangers were able to somehow tie it. They did it through hard work. On a very good cycle from Jimmy Vesey, he drew two Habs to him up high including Markov to push the puck down low to Nash. Nash came out and got a tough shot on Price that leaked out to an open Skjei, who deposited the momentum shifting goal that tied the score before intermission. It was a terrific play by both Nash and Vesey, who have really worked well together since being moved to the first line with Derek Stepan.

The third was tight as a drum. It had to be. Neither team wanted to make a mistake. In a period where each killed off a penalty, it was Lundqvist who made the save of the game robbing Pacioretty on a breakaway with over seven minutes left. Pacioretty was able to get free on a Markov bouncing pass behind Smith and came in. He shot low but Lundqvist kicked it out to preserve a 2-2 tie.

HUGE stop by Henrik to keep the game tied for the #Blueshirts! Stay tuned to @MSGNetworks for OT action coming soon! pic.twitter.com/nYz8vjqPat

Miller took a bad slashing minor with 5:47 remaining. But a determined bunch of Blueshirts never gave a inch. As time wound down, it was apparent to everyone in the building Game 5 was destined for overtime. Much like Game 2 which the Habs came back and won, the nervousness and anxiety kicked in as the buzzer sounded.

In sudden death, it was unlike Game 2. In that one, it was all Habs and they got the win deservedly so. This time, it was a more calm and confident Rangers who came out ready. They used their speed and took away the neutral zone from the Canadiens. Kind of a role reversal.

The OT was so lopsided that if the Rangers didn’t find a way to score, eventually you know the Canadiens would’ve come back the other way and won it. They were outstanding. Strong defensive performances from top tandem McDonagh and Girardi really stood out. Whether it was Girardi throwing a ferocious hit or McDonagh laying out for a huge block, they were terrific. They also had better breakouts and pinched effectively creating issues for the Habs.

Girardi had a open one-timer off a good forecheck forcing Price to make a glove save a few minutes in. Rookie Pavel Buchnevich was dangerous on a couple of shifts. But he couldn’t get one past Price, who made so many big stops in sudden death including a nice pad stop on a tough low shot by Nash, leaving no rebound for Stepan.

Zibanejad created the best opportunity. On a relentless cycle, he came out with the puck and had Chris Kreider wide open in front. He made the pass across but Kreider fanned on the shot. He was too anxious. That’s the kind of series it’s been for him. Minutes later, Vesey came flying into the Habs zone and skated around Markov inside and missed wide on a pointblank chance with Price dead to rights.

Even Holden got a couple of shots through and showed more confidence in his game. But if he hadn’t recovered on a hiccups, we might not be talking about a win. Thankfully, he recovered. He also drove the net and collided with Price drawing boos from the home crowd who wanted goalie interference. The Habs only got three shots on Lundqvist. None dangerous. They were completely bottled up.

As fate had it, Kreider and Zibanejad got another chance. Off an Alexei Emelin turnover in the neutral zone, Kreider gained the zone and threw a pass that deflected off Emelin’s stick right to Zibanejad in front where he finished into an open side for a stunning 3-2 win in sudden death.

ZIBANEJAD WINS IT IN OVERTIME!!! Watch it here! #Blueshirts lead the series 3-2! pic.twitter.com/5jWMr53L4G

Out poured excited teammates to celebrate Zibanejad’s clutch OT winner. It was by far his best game. He wasn’t too bad in Game 4 either. It was nice to see a good guy get the winner. And he did out of hard work. It was also nice to have Kreider back. He set it up. He needed to be a factor and was.

When it comes down to it, this is how the Rangers must play. Vigneault rolled his four balanced lines and reaped the rewards. That included Fast with Oscar Lindberg and Michael Grabner. Lindberg was again a factor on some shifts in the OT. Vigneault gets a ton of credit for making the lineup change by reinserting Buchnevich for Tanner Glass. Glass did nothing wrong. But putting Buchnevich in and redoing the four lines has given his team the right mix of speed and balance.

Lundqvist made 34 saves for a well deserved victory. Price stopped 33 of 36 in defeat. Now, the Rangers try to finish it off at home Saturday. We’ll see if they have the cajones. 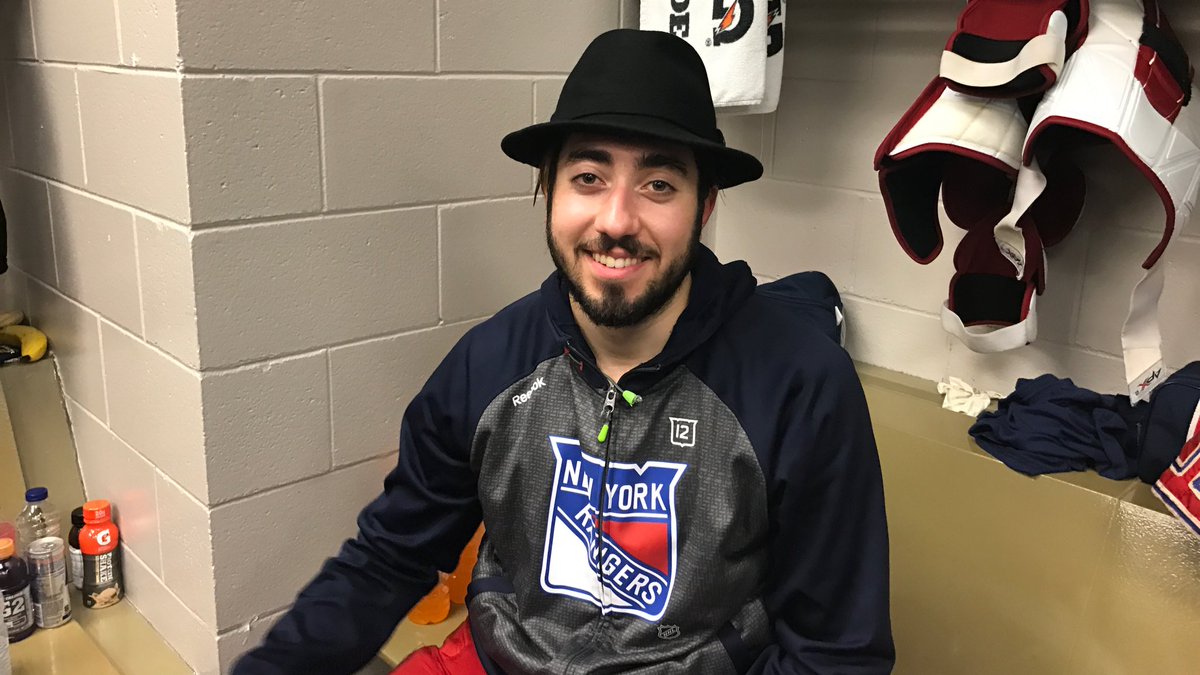 2nd Star-Henrik Lundqvist, Rangers (34 saves including his biggest on Pacioretty with the game hanging in the balance)

See the reaction in the #Blueshirts locker room after the OT win! pic.twitter.com/jC69v40L6X

Hear what @HLundqvist30 had to say after his 34-save performance for the #Blueshirts in Game 5. pic.twitter.com/WROGK83LWp