What determines a coach’s challenge? 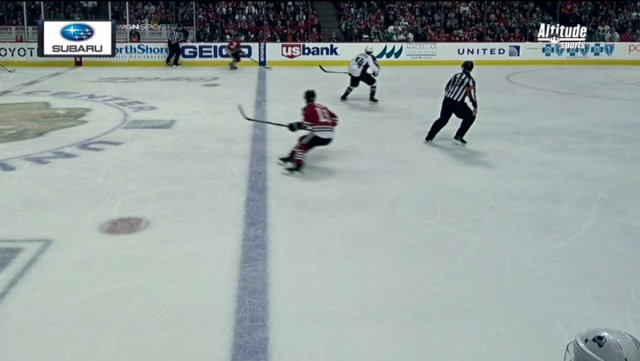 Controversy surrounded a Jonathan Toews goal which was upheld by video review despite a valid offside challenge by the Avalanche who fell apart losing 6-3 to the Blackhawks. AP Photo via Getty Images courtesy Ryan Boulding.

As I sit here ready for bed, I am proposing a question to hockey fans. What determines a coach’s challenge? The reason for this is how controversial some of the NHL rulings have been following challenges.

Take for example during the Blackhawks’ furious rally in the final half of the third period in a stunning 6-3 win against the Avalanche (well maybe not). Trailing by two, Chicago captain Jonathan Toews got the second redirection for a goal which made it 3-2 with 9:43 remaining. The Avalanche immediately challenged for offside.

I didn’t get to see the replay until all the NCAA college basketball games were over. But by catching the highlights on NHL Network hosted by the wonderful Kelly Nash, I knew right away that Colorado had a good challenge which should’ve resulted in the goal being reversed. Even the Hawks’ announcers were in agreement that Toews didn’t get back in time to tag up before Richard Panik entered the zone with the puck on the blue line. However, as only the powers that be could do, they confirmed the call on the ice which meant it was a good goal.

Much to the disbelief of the Colorado bench, they never recovered. Let’s be clear here. They are a very bad team. The worst in the league. But that shouldn’t excuse the officials and Toronto from blowing the call. Here was the explanation handed out to CSN’s Tracey Myers who does a splendid job covering the Hawks:

Need further proof that the NHL messed up despite the cheesy standard explanation? Ryan Boulding of Avalanche website media relations provides it in this Gif:

You make the call? A blind person could do a better job. Of course, being that it’s the Avalanche and they are brutal, it went from 3-1 Colorado to 4-3 Chicago in a 34-second span. Goals from Panik and Artemi Panarin followed up Toews’ controversial goal. The Hawks captain would score one more for his 20th giving him 10 seasons of 20 goals or more. A Marcus Kruger empty netter was the final bookkeeping.

The Blackhawks clinched the playoffs with their win and a Calgary win over the Kings. They are now up to 99 points leading the slumping Wild by seven for the Central Division and the West’s top spot. Minnesota lost again despite rallying from a four-goal deficit before losing 5-4 at Winnipeg for their season high fifth straight loss- leaving coach Bruce Boudreau at a loss for words.

Can you blame him? I am not sure what’s happened there. But they looked like a mess against the Rangers even though they won by a goal 3-2 on Saturday in St. Paul. A game which saw the Wild come undisciplined with some unnecessary slashing minor penalties from a couple of their leaders. Congrats to Eric Staal on playing his 1,000th career game. Good for him having a great bounce back year. His 24 goals and 54 points rank second behind teammate Mikael Granlund. Staal’s seven game-winning goals lead the team.

Getting back to the original subject, why is there so much confusion on video reviews? Is it the technology they have available? Having the refs look at replays on I-Pad minis isn’t great. But what about Toronto? In some cases, it is hard to determine if a play can be overturned. Especially when it comes to an original ruling for say No Goal on the ice. Even with the benefit of replays, they don’t always have every conceivable angle or feed. Sometimes, you can tell if it should be overturned.

But we also know from the league standard that if there isn’t clear evidence, they won’t overturn a call. What is puzzling is when you have Gifs and videos like the one above that show Toews not onside which would make the whole play offside. Somehow, the original call stood. Based on what? The explanation was hideous.

What if this happens in the NHL Playoffs at a crucial moment in a game? That’s why there is growing concern. Some of the offside challenges take forever to figure out. It slows up the game which definitely can hurt momentum and frustrate fans. Of course, they want to get each call right.

I’ve been consistent in pointing out that I believe they need to make adjustments to the coach’s challenge. Especially when it pertains to offside. If it’s a millimeter off, then it’s a waste of time. In my view, that shouldn’t matter. If it’s clear as day, then by all means use the technology to overturn a call made on the ice.

I’m also not a big proponent of a coach losing their timeout for not winning a challenge. It really puts them in a tough bind. Do they challenge and take the chance of getting it wrong and losing their timeout or do they save the timeout for an icing when players are exhausted? I feel an extra timeout should be added. Especially during the postseason. Imagine you’re deadlocked and in the third overtime and you have to decide between using the timeout to rest your players or save it just in case. You can see the dilemma.

When it comes down to it, the coach’s challenge is good because it makes the game more interesting. There are instances where it’s good to have it like on goaltender interference. Though the standard remains inconsistent. The onus is still on the refs to make the right call. That means being in the proper position.

The feeling of seeing a team get the shaft like Colorado did Sunday night isn’t good. No matter how bad they are, the idea is to get it right. They clearly were screwed and momentum swung in Chicago’s favor. That’s not how it should work.

With that, my two cents is done. Onto another debate.

Derek Felix is sports blogger whose previous experience included separate stints at ESPN as a stat researcher for NHL and WNBA telecasts. The Staten Island native also interned for or hockey historian Stan Fischler and worked behind the scenes for MSG as a production assistant on New Jersey Devil telecasts. An avid New York sports fan who enjoys covering events, writing, concerts, movies and the outdoors, Derek has covered consecutive Staten Island Yankees NY Penn League championships in '05 and '06. He also scored Berkeley Carroll high school basketball games from '06-14 and provided an outlet for the Park Slope school's student athletes. Hitting Back gives them the publicity they deserve. In his free time, he also attends Ranger games and is a loyal St. John's alum with a sports management degree. The Battle Of New York administrator and chief editor can be followed below on Twitter and Facebook.
View all posts by Derek Felix →
This entry was posted in Column and tagged Avalanche, Blackhawks, Bruce Boudreau, coach's challenge, Eric Staal, Hockey, Jonathan Toews, Kelly Nash, NHL, NHL Network, refs, Richard Panik, Toronto, video review, Wild. Bookmark the permalink.

1 Response to What determines a coach’s challenge?