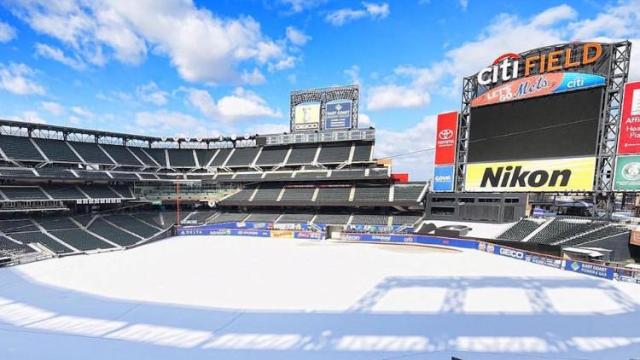 The rumored 2018 NHL Winter Classic is expected to be played at Citi Field. Home of the Mets where the Sabres would host the Rangers. AP Photo via Getty Images courtesy SNYRangers.

The rumors have been circulating for a while regarding next year’s Winter Classic. It looks like the Rangers and Sabres will likely be playing at Citi Field in January 2018. If true, it would be the first Winter Classic for Buffalo since its inception when they hosted the Penguins in its 2008 debut on New Years Day. A game won by Sidney Crosby in a shootout at Ralph Wilson Stadium with snow falling.

If it is confirmed by the NHL, the Sabres would be the home team in Queens. You gotta love it. Similar to how the Rangers were the road team in the Coors Light Stadium Series at Yankee Stadium with separate games against the Islanders and Devils, they would be guests despite more of a local following. The only time they participated in the Winter Classic was 2012 when they defeated the Flyers 3-2 at Citizens Bank Park in Philadelphia. A game which was memorable for Mike Rupp scoring twice and Henrik Lundqvist preserving the win by stopping Daniel Briere on a penalty shot with 19.6 seconds remaining.

2018 would mark the 10th ever NHL Winter Classic. A classic outdoor pond hockey game hosted in a variety of historic baseball stadiums such as Fenway Park, Wrigley Field and Busch Stadium along with football stadiums such as Ralph Wilson, Heinz Field and Michigan Stadium. The visiting team has won six of the nine games. Two have been decided in a shootout and one in overtime.

The idea of having the Sabres in the game is cool. Young American Jack Eichel is one of the game’s brightest new stars. In his second season, the 20-year old center who went second overall in the famed 2015 NHL Draft which saw the Oilers grab Connor McDavid first overall has been on fire in the second half. Since the All-Star break, Eichel has 27 points (8-19-27). After having a recent 11-game point streak (5-11-16) snapped, he’s responded with two goals and an assist in Buffalo’s last two games.

Featuring Eichel in the big game is great. The Sabres are still in the process of rebuilding. They have some good young players including defenseman Rasmus Ristolainen, Jake McCabe along with forwards Evander Kane, Kyle Okposo, Ryan O’Reilly and Sam Reinhart. By next calendar year, 2016 first round pick Alex Nylander should be a part of it.

The Rangers’ biggest star remains Henrik Lundqvist. Even in the twilight of a brilliant career that’s seen him win 30-or-more games for the 11th time and crack the top 10 all-time with his 404th career win, he’s their most marketable player. With a young nucleus that includes Kevin Hayes, Chris Kreider, J.T. Miller, Ryan McDonagh, Brady Skjei, Derek Stepan, Mika Zibanejad, Mats Zuccarello along with youngsters Pavel Buchnevich and Jimmy Vesey, the Blueshirts should remain competitive in a tough Metro Division.

With Lundqvist and current Buffalo starter Robin Lehner, it could be an all Swedish affair in goal. The biggest selling point is Eichel, who will get the chance to be in the spotlight with the Sabres in front of a national audience.

Citi Field is a nice venue. A better stadium than Shea. So, it should be a unique setting. I wonder if notorious Rangers fan Matt Harvey will be on hand to drop the ceremonial first puck with David Wright. We’ll see.

As for the Islanders not getting the game, I actually like the idea of Buffalo hosting. But I can definitely see how this might stick in the craw of Islander fans. Especially with uncertainty surrounding their current venue Barclays Center. There’s even been talk about building a new arena adjacent to Citi Field in Queens. Hopefully, the Islanders will get things figured out so their long-term future remains in New York.

Derek Felix is sports blogger whose previous experience included separate stints at ESPN as a stat researcher for NHL and WNBA telecasts. The Staten Island native also interned for or hockey historian Stan Fischler and worked behind the scenes for MSG as a production assistant on New Jersey Devil telecasts. An avid New York sports fan who enjoys covering events, writing, concerts, movies and the outdoors, Derek has covered consecutive Staten Island Yankees NY Penn League championships in '05 and '06. He also scored Berkeley Carroll high school basketball games from '06-14 and provided an outlet for the Park Slope school's student athletes. Hitting Back gives them the publicity they deserve. In his free time, he also attends Ranger games and is a loyal St. John's alum with a sports management degree. The Battle Of New York administrator and chief editor can be followed below on Twitter and Facebook.
View all posts by Derek Felix →
This entry was posted in Battle News and tagged Citi Field, David Wright, Henrik Lundqvist, Jack Eichel, Matt Harvey, Rangers, rumor, Sabres, Winter Classic. Bookmark the permalink.