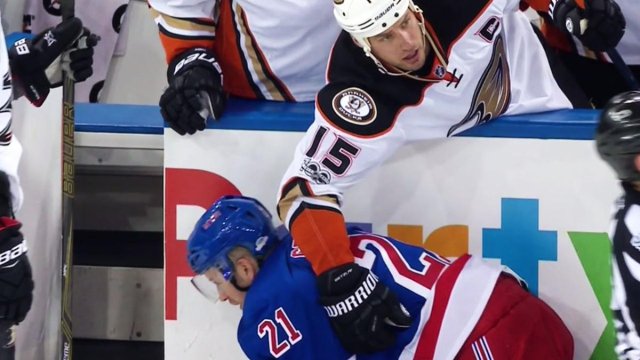 Ryan Getzlaf helps Derek Stepan get up after he was knocked down from behind by Logan Shaw. A cool moment during Tuesday’s game between the Rangers and Ducks at The Garden. AP Photo via Getty Images courtesy Sportsnet.

During the third period of a Rangers 4-1 win over the Ducks at Madison Square Garden, Derek Stepan was hit hard by Anaheim’s Logan Shaw right into the boards. As he struggled to get to his feet, there was Anaheim captain Ryan Getzlaf doing Stepan a solid by helping him get up and out of the way of a scrum that ensued near the benches.

It was a cool moment. Here was Stepan in a prone position as players came together following the Shaw hit which went undetected. As Jimmy Vesey came to his aid leading to matching roughs, Getzlaf made sure Stepan didn’t suffer any further injury. It was a gentlemanly display by a player who exhibits class. Here is the video and call from MSG’s Sam Rosen and Joe Micheletti:

In a game where players are giving it their all and battling, this was one of those great moments that makes hockey special. On You Can Play Project night, it was fitting.

Kudos to you, Mr. Getzlaf.

Derek Felix is sports blogger whose previous experience included separate stints at ESPN as a stat researcher for NHL and WNBA telecasts. The Staten Island native also interned for or hockey historian Stan Fischler and worked behind the scenes for MSG as a production assistant on New Jersey Devil telecasts. An avid New York sports fan who enjoys covering events, writing, concerts, movies and the outdoors, Derek has covered consecutive Staten Island Yankees NY Penn League championships in '05 and '06. He also scored Berkeley Carroll high school basketball games from '06-14 and provided an outlet for the Park Slope school's student athletes. Hitting Back gives them the publicity they deserve. In his free time, he also attends Ranger games and is a loyal St. John's alum with a sports management degree. The Battle Of New York administrator and chief editor can be followed below on Twitter and Facebook.
View all posts by Derek Felix →
This entry was posted in NYRangers and tagged Cool Moment, Derek Stepan, Ducks, Logan Shaw, Rangers, Ryan Getzlaf, You Can Play. Bookmark the permalink.