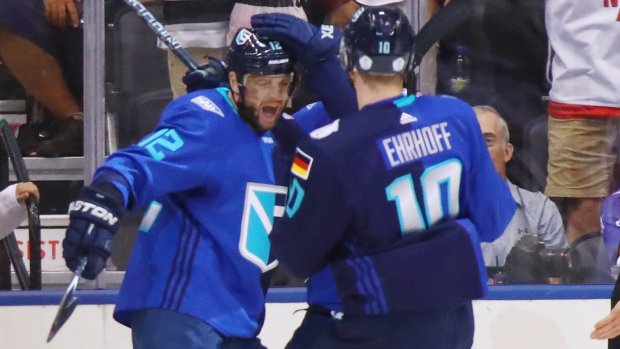 There was so much build up for the first game of the World Cup of Hockey. A tournament born in ’96 which proved to be a memorable moment for American hockey with Team USA backstopped by tournament MVP Mike Richter stunning Canada in a compelling three game series, it’s back 20 years later in Toronto.

Unlike ’04 when it wasn’t as big a deal, this one feels like it. The anticipation. Clearly, fans are as is ESPN, which last had real hockey 12 years ago. For whatever reason, the 2016 version of Team USA wasn’t. After looking sharp in tune ups, they mailed it in- losing in dismal fashion to Team Europe 3-0 at Air Canada Centre.

Was it the early start time? Hardly. All we know is one team was ready to play while the other forgot to set the alarm clock. The aggressive and physical nature of coach John Tortorella’s Americans was seriously lacking. It led to a very disappointing uneven performance that can’t be explained. Defensemen pinched as did forwards at inopportune times, resulting in costly turnovers. Europe’s first two goals were a direct result of such chaos.

The first goal came off the stick of Slovakian sniper Marian Gaborik. He was the recipient of a great Frans Nielsen feed off a two-on-one. It happened in an instant with Ryan McDonagh caught up ice and Derek Stepan going to sleep defensively. Lazy back checking allowed the crafty Nielsen to create the odd-man rush and make a sweet dish in front for Gaborik, who beat American starter Jonathan Quick. Mats Zuccarello started the play in his own end by catching his Ranger teammate McDonagh with a quick outlet for Nielsen which led directly to the tournament’s first goal.

It was a tough first two periods for Quick. The 2012 Conn Smythe winner gave up three goals on nine shots. Sadly, none were his fault. The second European goal was another dreadful USA mistake. That it came from rating Hart winner Patrick Kane epitomized the emptiness in their game. He made a foolish pinch and got trapped along the boards by Tobias Rieder causing a ridiculous two-on-none break. Oilers’ youngster Leon Draisaitl was only too happy to work a perfect give-and-go with Nino Niederreiter allowing Draisaitl to get the return feed for an easy tap in past Quick.

Even when they did appear to score on a power play, it didn’t go their way. After firing some blanks, James van Riemsdyk had a puck go off his chest past Europe starter Jaroslav Halak. To the naked eye, it looked like he deliberately did it. So, Europe challenged. Interestingly, one angle appeared to show the puck bounce off Stepan’s helmet in front which looked like a good goal. But they had no luck. The goal was waved off keeping the game 2-0. After a couple of other good looks on the man-advantage with in particular T.J. Oshie missing on great set ups along with captain Joe Pavelski, they fell asleep late in the second on Europe’s third goal.

On an excuse me wrist shot from Jannik Hansen, Pierre-Edouard Bellemare was able to get inside position on a napping Ryan Suter to deflect the puck past Quick at 18:32. Veteran German defenseman Christian Ehrhoff drew the secondary helper on a good keep.

The third period was defensive minded by Team Europe. They made sure to keep a third man high and only sent one forechecker in. A more aggressive USA was able to get more chances and drew penalties. But they never could get to Halak, who finished with a game high 35 saves- including 11 for 11 facing the USA power play. On one, they fired from everywhere getting six through but Halak wasn’t having any of it. The Islanders starter was sharp and earned the game’s first star.

So, what happened? For starters, there was no Dustin Byfuglien with Tortorella opting to go with three left and three right defensemen. A big miscalculation on his part. Even if he loves Jack Johnson, who plays for him in Columbus, it’s inexcusable to not start the big, physical and imposing Byfuglien.

Kyle Palmieri was also a scratch in favor of Justin Abdelkader. Nothing against Abdelkader who brings net presence and works diligently. But Palmieri can do that and has higher skill. He’s coming off a career season in which he scored 30 goals. In a must win scenario against beast Canada, who’s currently ahead 5-0 on the poor Czech Republic, Palmieri has to be in as does Big Buff.

As far as the goalie, you can’t pin it on Quick. If not for at least three quality stops including one highway robbery on Tomas Tatar, it’s a blowout despite the 35-17 edge in shots. There just wasn’t as much compete from USA. Something that drove former ’96 members Brett Hull and Chris Chelios nuts between intermission with host Linda Cohn. Hull didn’t mince words. He practically has written them off with Canada next. Chelios was just as harsh. If anything, they were entertaining.

Gotta love Hull saying, “If they can’t beat Europe, how are they gonna beat Canada?”

You would expect a team of their character to get up for a top heavy Canadian roster being led by Sidney Crosby (goal, 2 assists), Patrice Bergeron (goal, assist) and Brad Marchand (2 assists) on a do everything top line.

One takeaway on Europe. They might be the oldest team in the eight team tournament. But they also feature two of the game’s best players in all world center Anze Kopitar, who was masterful. Plus Roman Josi, who is a top six defenseman. Plus Zuccarello, who reminded you again why he’s so crafty and so competitive. How about that block on McDonagh and the hit against his New York buddy. You gotta love it. Halak’s a bit streaky. He wasn’t challenged enough until the third.

Bottom line. The Americans didn’t play with enough purpose. Not enough edge or poise. They made selfish mistakes. The kind I got used to seeing from the Rangers. Yeah. I went there. Both McDonagh and Stepan had awful games. But it was a total team effort. A bad double minor for high sticking from Brandon Dubinsky on Zdeno Chara. A penalty you can’t take when you’re trailing by three early in the third.

Ryan Kesler took two penalties too. He was one of the few skaters who at least tried. Same for Blake Wheeler and Zach Parise. Pavelski did too but it wasn’t enough. The whole D was porous. I would say Matt Niskanen was their best and he was also a minus. John Carlson wasn’t active enough either. The Johnson boys didn’t. McDonagh and Suter get F’s.

They have the next two days off to correct the mistakes. They’ll have to be flawless against Canada. Especially at the ACC in Canadian crazy Toronto. They did split two games with them in the tune up. We’ll see if they can turn it on. If not, it’s a epic fail.

Watching the Czechs against Canada, at least they’re competing. They started well but couldn’t beat Carey Price. They’re over matched.

Tomorrow’s games feature Group B. First up, it’s Russia against Sweden Sunday at 3:30 PM. The night cap promises to be fun with the 23-and-under North America battling pesky Finland at 8. That is a must watch for any hockey fan.