Lou, Oates and Stevens all co-coaches in bizarre announcement 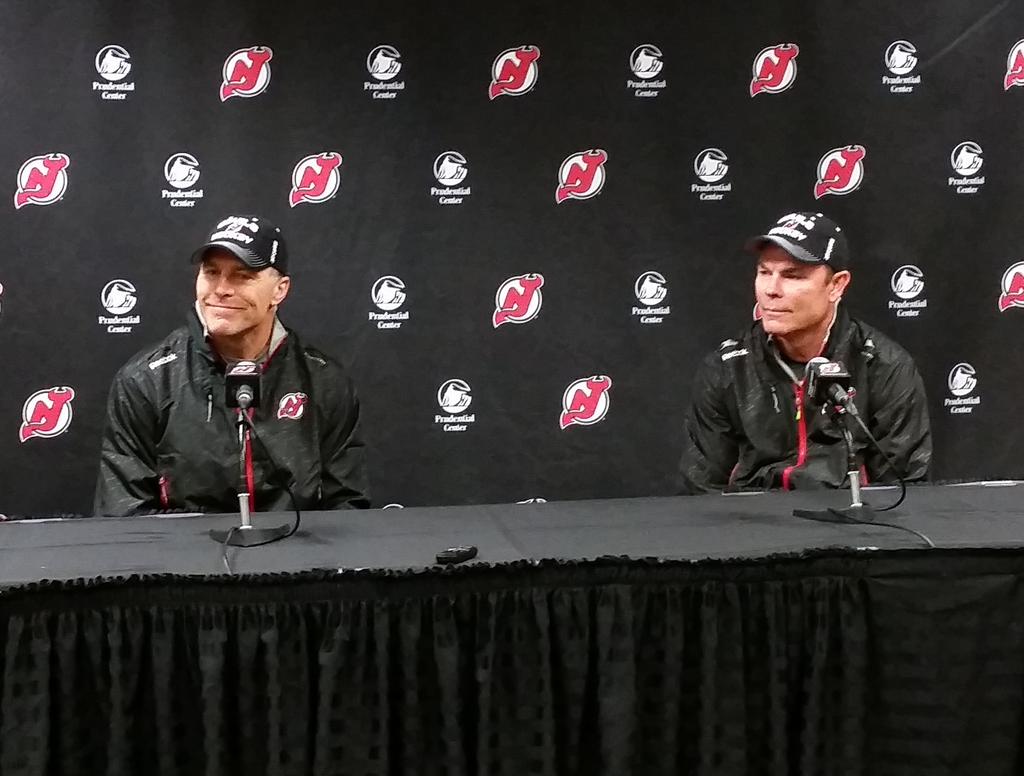 I didn’t think things could get as bizarre as they were during the Ilya Kovalchuk contract penalty fiasco, him walking away from $80 million to go to Russia or having the team captain bolt for home a month after playing in the Stanley Cup Finals but today the Devils managed to add another strange moment to their sordid recent history, with GM Lou Lamoriello announcing the hiring of not one but TWO head coaches, with Adam Oates being the de facto offensive/forwards coach and Scott Stevens the defensive coach.  Or is it actually three head coaches considering Lou himself has returned to the bench yet again (insisiting it’s short-term)?!  My head hurts just from typing all that.

In what might have been the most spectacular understatement of the day, Lou acknowledged that it’s a ‘unique’ situation designed to get the most out of the team.  Unique, eh?  You don’t say, Lou…granted co-captains are nothing new in the NHL (the Sabres have made something of a franchise tradition in it) but co-coaches are another story.  As much as a sports historian as I am literally the only time I can remember there ever being co-coaches were the infamous college of coaches enacted by the Cubs in the 1960’s.  In trying to explain why he went down this bizarre road, Lou gave this rationale:

Lamoriello said it was unfair in this situation to ask one person to come in and be the head coach for for rest of season.

Ironically enough one person did just that four years ago when Jacques Lemaire came back to get the most out of a hopeless cause in December 2010.  Now clearly that person wasn’t available this time around as Lemaire was firm in retiring after the season, but predictably Lou went with what he knew once again in trying to…well I don’t even know what the heck he’s trying to do.  I guess he’s admitting this season’s become an evaluation period/blow it up time.  Apparently that extends to behind the bench with Lou stating the intention is to have one head coach for 2015-16, which ‘might be Stevens, Oates or someone else’.  So clearly not only are the players auditioning but so are the coaches in what’s become a truly enigmatic situation.

Secondary to the actual coaching mess is the palace intrigue the new/old staff indicates.  Not only was coach Pete DeBoer fired, but so was assistant Dave Barr which was kind of odd given that whenever Barr took over a unit (PK or PP) it seemed to be among the top ones in the league, and he himself had head coaching experience.  But he was let go entirely while lesser-tenured assistants Mike Foglino and Tommy Albelin stayed.  And the fact that taking over for DeBoer and Barr were two former assistants who worked under/with them suggests there was something of a palace coup.  Particularly in the case of Stevens who mysteriously left the team on the eve of camp this year suggesting he wanted to spend more time with his family and didn’t want the demands the job required.  That was four months ago.  Perhaps Rich Chere had the truth more than anyone knew at the time when he suggested there were ‘differences’ between Stevens and DeBoer and even Lou admitted at the time he felt Stevens’ absence was short-term and that he’d hopefully be back in the organization soon.

Oates admitted mixed feelings upon getting the call for the job given the friendship he and Pete had in his short time on the Devils’ staff, while Stevens acknowledged publicly that while he had no issues with Pete personally, there were philosophical differences between him and the now former head coach.  What those differences are I suppose will become evident in the season’s second half now that he’s in charge…sort of.  At least Stevens – as usual – sounded like he was ready to take charge in a joint interview both he and Oates gave to the media after practice.

Scott Stevens says the plan is to get the “Devils identity back and be hard to play against.”

I’m sure that – and Stevens’ return behind the bench – will appease the fans for the moment, but how they can get back to a Devils identity remains to be seen.  Especially with a problematic roster in transition.  There’s still so much…weirdness about this whole thing.  Despite the fact I half-kiddingly predicted to a friend I felt Stevens was coming back yesterday.  Do both Stevens and Oates get introduced before the games?  Do they do joint pressers after the games now or does Lou do it as long as he’s on the bench?

Oh and by the way the Devils play at Madison Square Garden tonight, against the hot Rangers.  Talk about the circus coming to town.  And as almost an aside at this point, the mumps is still spreading through the Devils with Patrik Elias, Michael Ryder and Scott Clemmensen (now down in Albany) all shelved due to the illness that’s dominated the landscape the last two months in the NHL.  Though at least we’re getting Danius Zubrus and Jacob Josefson back from other injuries…whooppee.  Even with Tim Sestito riding the EZPass expressway back and forth from Albany again the Devils will still have only eleven healthy forwards tonight.

No coach, no captain, and a bad lineup in flux?  What can possibly go wrong?

1 Response to Lou, Oates and Stevens all co-coaches in bizarre announcement