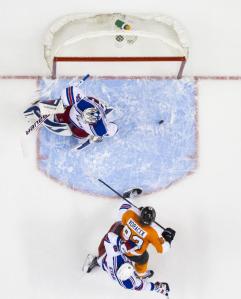 Jakub Voracek tips in the winner on the power play that evened the series.
AP Photo/Chris Szagola

By show of hands, who thought the power play woes were a thing of the past? For much of the season, the Rangers have been able to score on the man-advantage. After finishing 15th under the tutelage of assistant coach Scott Arniel, they buried the Flyers in Game 1 cashing in twice.

Since Benoit Pouliot converted a power play goal for a 2-0 lead in Game 2, the Rangers have failed miserably. They’re 0 for their last 12. The Flyers shut them out at Wells Fargo Center. They went 0-for-8 including a critical blown opportunity on a 4-on-3 highlighting yesterday’s 2-1 Game 4 loss that evened the series. In particular, their reluctance to shoot for the remaining 1:12 at the start of the third was inexplicable.

So was Alain Vigneault’s curious choice not to use Rick Nash. He only received 2:33 on the power play. A low amount compared with Brad Richards (7:27), Derek Stepan (4:16) and Martin St. Louis (4:08). Even though he hasn’t scored yet, he’s their most dangerous finisher. In the series, Nash leads the Rangers with 23 shots. That included a point blank chance which Steve Mason denied. There also was the close call at the end where he missed a backhand. Nash finished with five shots and missed the net four times. They’re just not going in. Despite having four assists, he’s taken criticism due to having only 1 goal in 16 postseason games as a Blueshirt. That must change.

“I don’t think we made it difficult enough [on Mason],” Nash told New York Post’s Larry Brooks in a column detailing his struggles. “We need more traffic and to create more chances.”

Of course, he’s right. In Mason’s first start, he was able to see the shots allowing him to make 37 saves. No one went to the blue paint and made his life difficult. Part of the power struggles were a lack of traffic. They also had problems getting set up. The Flyers challenged at the blue line forcing them into careless turnovers. When they did have puck possession, they were too stagnant. An epidemic that plagued them under Mike Sullivan.

In their two wins, the Flyers have won the special teams battle. In Game 2, they went 2-for-3 on the power play and killed off five of six including the Rangers’ last four. Friday night, Jakub Voracek notched the winner with a power play tally. Again, Philadelphia made the most of their opportunities going 1-for-2. Their aggressive penalty kill went four of four.

Overall, the Rangers are 3-for-20 in the series. All three came at MSG where they went 3-for-12. When the series resumes tomorrow for a pivotal Game 5 at high noon, they must do a better job. The Flyers have taken bad penalties throughout. They must make them pay.

Derek Felix is sports blogger whose previous experience included separate stints at ESPN as a stat researcher for NHL and WNBA telecasts. The Staten Island native also interned for or hockey historian Stan Fischler and worked behind the scenes for MSG as a production assistant on New Jersey Devil telecasts. An avid New York sports fan who enjoys covering events, writing, concerts, movies and the outdoors, Derek has covered consecutive Staten Island Yankees NY Penn League championships in '05 and '06. He also scored Berkeley Carroll high school basketball games from '06-14 and provided an outlet for the Park Slope school's student athletes. Hitting Back gives them the publicity they deserve. In his free time, he also attends Ranger games and is a loyal St. John's alum with a sports management degree. The Battle Of New York administrator and chief editor can be followed below on Twitter and Facebook.
View all posts by Derek Felix →
This entry was posted in NHL Playoffs, NY Rangers. Bookmark the permalink.