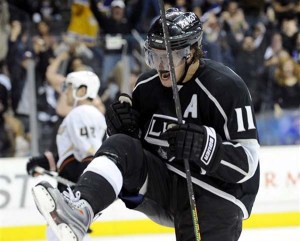 Anze Kopitar is one of our picks to have a big year.
viewfrommyseats.com

Predicting the NHL always presents a unique challenge. Reflecting back on last year, what was I thinking? I had the Rangers beating the Canucks in a ’94 rematch. Instead, John Tortorella and Alain Vigneault swapped places. All the more reason for why it’s almost impossible to predict what will happen. Which coach will fare better? Fuh-get ’bout it!

The biggest question is can the Blackhawks repeat. Short answer. Yes. They could become the first repeat winner since the Red Wings. It’s the NHL that has a different champ every year despite the cap and every ticky tac rule change that flusters the diehards. Hybrid icing is in for player safety. So is the helmet rule that’s geared to protect fighters from dangerous head injuries. The jersey no tuck rule is odd. It’s better off I don’t say anything I might regret later.

Even with the new rules, hockey fans are still the most passionate of any sport. The added excitement of six outdoor games including the Devils, Islanders and Rangers participating in the Stadium Series at Yankee Stadium will generate even more revenue. The Winter Classic features Original Six rivals Detroit and Toronto, who now play in the same division. This would’ve been hard to picture 20 years ago when each still existed in the old Norris. Realignment has made it possible. The other outdoor events include the Blackhawks and Pens meeting at historic Soldier Field, the Kings hosting the Ducks at Dodger Stadium and the Canucks and Senators at Vancouver’s BC Place. How exactly will that hockey game look at Dodger Stadium? That’s the one I’m most excited about.

It all takes place in an Olympic year with the world’s best players headed to Russia. By then, Ilya Kovalchuk should be recovered. Depth will get tested. There are sure to be plenty of injuries which could further throw things out of whack. With four action packed divisions and a full slate, it’s sure to be wild. Let’s take a closer look at each division and who’ll be crashing the Spring party.

Derek Felix is sports blogger whose previous experience included separate stints at ESPN as a stat researcher for NHL and WNBA telecasts. The Staten Island native also interned for or hockey historian Stan Fischler and worked behind the scenes for MSG as a production assistant on New Jersey Devil telecasts. An avid New York sports fan who enjoys covering events, writing, concerts, movies and the outdoors, Derek has covered consecutive Staten Island Yankees NY Penn League championships in '05 and '06. He also scored Berkeley Carroll high school basketball games from '06-14 and provided an outlet for the Park Slope school's student athletes. Hitting Back gives them the publicity they deserve. In his free time, he also attends Ranger games and is a loyal St. John's alum with a sports management degree. The Battle Of New York administrator and chief editor can be followed below on Twitter and Facebook.
View all posts by Derek Felix →
This entry was posted in NHL Preview. Bookmark the permalink.